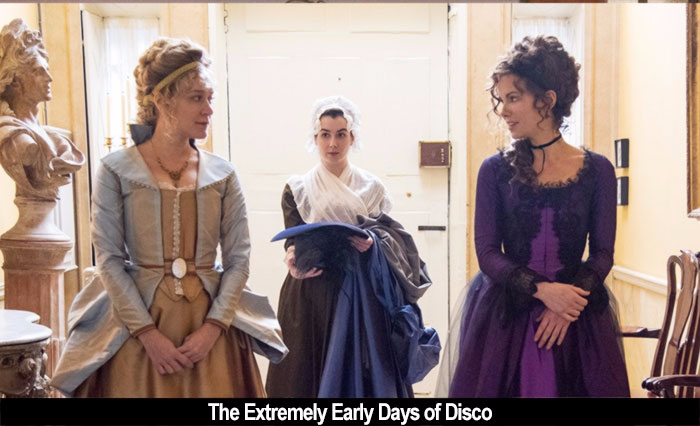 by Angelo Muredda When Whit Stillman emerged from his thirteen-year sojourn in the wilderness after The Last Days of Disco, it was with the pastel-washed curio Damsels in Distress, practically a radio transmission from a planet of the auteur's own construction. Where his Metropolitan and Barcelona dropped anchor in immaculately-observed social environs (Manhattan's waning debutante scene and the European refuge of loquacious Americans, respectively), Stillman's modestly-budgeted return to filmmaking holed up in a dreamlike and not especially convincing college setting, where Gatsby-esque self-inventors sought to transform their ugly little world through good soap and new dance crazes. A deeply hermetic work even by Stillman's standards, Damsels in Distress feels in retrospect like a minor but necessary stepping stone back to the better realized but still heightened reality of Love & Friendship, a signature work that is nevertheless Stillman's most accessible to the uninitiated. Despite marking his first adaptation--of Lady Susan, a short, posthumously-published epistolary novel by Jane Austen, whom he has long worshipped--the film is as pure an expression of the Stillman style and worldview as any despite its largely English cast and the sincerity of its period trappings as a 1790s costume comedy about the machinations of the rich, the formerly rich, and the rich-adjacent.

The Last Days of Disco's MVP Kate Beckinsale slinks back into Stillman's deceptively smooth cadences and twisting turns of phrase as Lady Susan Vernon, a duplicitous widow who casually invites herself to her brother-in-law's estate to ride out gossip concerning her dalliances with certain married members of the opposite sex. A born schemer who roams through high society like a virus in search of new bodies to conquer, Lady Susan begins the hard but necessary work of protecting her future by securing a pair of husbands, one for herself and another for her wilful but otherwise eligible daughter Frederica (Morfydd Clark), who might be a good match for the handsome and snappy Reginald DeCourcy (Xavier Samuel)--assuming she doesn't snag him for herself first. Lady Susan's dealings see her gracefully navigating a full cast that includes the high-born but low-intellect Sir James Martin (Tom Bennett), identified in the living tableaux that make up the opening dramatis personae montage as "a bit of a rattle," and her American confidante Alicia Johnson (Chloë Sevigny), whose old-moneyed husband (Stephen Fry) promises a fate worse than death--i.e., banishment to Connecticut--should she continue to meet her sordid friend on the sly.

Stillman's comedies of manners have always been as successful or as stilted as their performers allow, and Beckinsale makes his words (via Austen) ring as sharply and tartly as they ever have. Her Lady Susan is at once dishonest and candid, reverent towards ornate, outmoded traditions and customs and skilful at bending them to suit her will as a divorcée with certain appetites. In that, she's a savvy 18th-century counterpart to Beckinsale's direct, acid-tongued publisher in The Last Days of Disco as well as Chris Eigeman's contemporary Valmont in same: a huckster with a moral code. She's matched not just by Sevigny, reprising something of her naughty-demure act from The Last Days of Disco as a well-behaved society woman who lives vicariously through her friend's brazenness, but also by Bennett, who's hysterically funny as a well-meaning rube in gentlemen's finery. Stillman's voice as a writer is arguably best channelled through his most vampiric characters, who tend to explain away the damage they do and advance their personal philosophies at the expense of everyone around them. Yet he's equally (and surprisingly) adept here at speaking through Bennett's cheerful innocent, a man delighted to learn the correct pronunciation of Churchill and the right name for "tiny green balls" (peas) and prone to announcing his every thought as if it were his first.

Although Lady Susan and Sir James make for perfect foils on the face of it, Stillman isn't much interested in any grand pronouncements about knowledge and innocence. Nor is he as strident as usual about the finer points of American versus Old World social mores, though Beckinsale makes hay of a monologue that concludes with the proviso that only by having children can one begin to understand the ingratitude and degeneracy of Americans vis-à-vis their English counterparts. There is a buoyancy, an ease, and a fleetness to Love & Friendship that suggests Stillman is settling comfortably into a minor period. Rather than being hampered for that modesty, the text--richly textured in its delineation of a diverse ensemble's personalities and desires but politically disinterested and blasé about critiquing their misdeeds, or saying something trenchant about the world they come from--is served all the better for it.