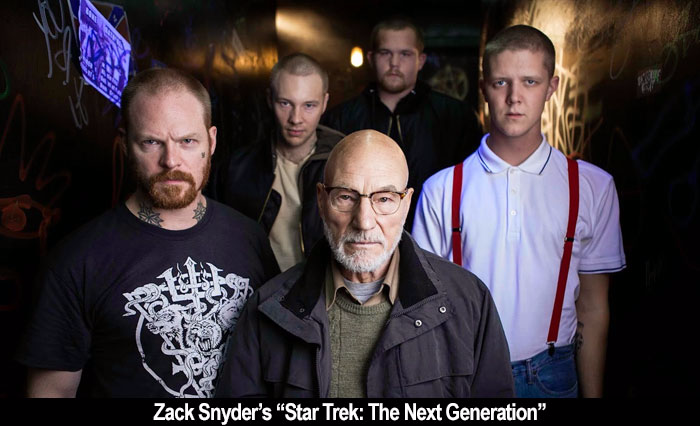 by Walter Chaw I wonder if Jeremy Saulnier has ever made something that wasn't, in its dark heart of hearts, a comedy. I hadn't considered this before a dear friend suggested it after a screening of Green Room, and it caused me to reassess Saulnier's previous films, Murder Party and Blue Ruin. The labels "hardcore" and "brutal" don't feel exactly right, though his work is certainly both at times. There's a Mel Brooks quote I like that defines tragedy as you getting a paper-cut--it hurts, it's awful, it's terrible--and comedy as somebody else falling into a sewer and dying. Saulnier's films are litanies of horrible, unimaginable calamities befalling generally well-meaning schlubs who are altogether unequipped to deal with them. Murder Party, his feature debut, set the template. Its protagonist is a lonely guy who answers a general invitation to attend a Halloween "Murder Party," where he discovers that he's the only guest and that all of the hosts have decided to murder him. It's the most obviously comic of his pictures, and it ends with a moment of crystal-blue melancholy as it becomes clear that the audience has sutured not just to this guy's guilelessness, but to the loneliness driving him as well. Blue Ruin is a masterpiece of the same sort of mechanics. It's delightful: delightfully funny, delightfully smart, delightfully brutal. The hero of that piece, played by Macon Blair (who has a key role in Green Room), is another nebbish pulled from obscurity to be, briefly, the hero of his own life.

Then there's Green Room, which is also delightful. It follows struggling punk band "The Ain't Rights" as they chase a gig straight into the heart of the white supremacist PNW, accidentally witness something they shouldn't, and find themselves captives in a club, locked down and hunted. Guitarist Pat (Anton Yelchin), who hesitates lest he be judged uncool when openly asked what his "desert island" album would be, seems the most centred of a group comprising Sam (Alia Shawkat), Reece (Joe Cole), and Tiger (Callum Turner). They preen, act out, steal gasoline, and believe themselves to be living in the very imitation of Sex Pistols circa 1975. The film's opening, with the bandmates waking up in a field in their beater of a van, instantly evokes The Texas Chain Saw Massacre and speaks to archetypal dread: the feeling of a boat adrift on a limitless sea that these backwoods horrors, when they work, suggest. The band does sad little gigs to disinterested and annoyed crowds in roadside diners. The first song they choose to perform in front of an obviously Nazi-friendly group is the Dead Kennedys' "Nazi Punks Fuck Off"--because, you know, punk rock, man. Gig completed, they collect a few bones and then see something forbidden, and suddenly they're trapped in a shoebox of a room with a gun, a goon, a body, and a girl, Amber (Imogen Poots, who has amazing taste and a great agent), who proves an exceptional ace in the proverbial hole. Arrayed against them is a White Power army led by Darcy (Patrick Stewart) and his lieutenant Gabe (Blair), who appears like nothing more than a harried middle-manager at a crossroads in his career.

The violence in Saulnier's pictures is entirely unromantic. It's flat and unpleasant and shock-waves emanate out from it to devastate the perpetrators and witnesses alike. There's the thing that happens to Pat's arm (his chord hand, I thought to myself; that's too bad), and that thing with the box cutter, and that part with the shotgun, and, oh, the pitbulls. And every time someone does something terrible to someone else, the landscape shifts and our punk rockers are suddenly less "punk." When push comes to shove, just prior to a desperate gambit to escape their wood-and-tin prison, a few members of our gang confess to each other that their real desert-island albums are pop confections and Simon & Garfunkel. An early bit of near-violence with Reece bullying a kid who's misled the group about the fate of their radio interview (and what "real" punk band would ever consent to such publicity?), is recalled once the actual violence starts and Reece is called upon to murder. It recalls the parallel construction of Cronenberg's A History of Violence in that respect--another film that has a conversation about the gulf between what we desire when we sit down to watch something like this, and how we feel when it's given to us without adornment.

Amber is the key to Green Room's effectiveness. Towards the end, when someone offers to confess to her their true "desert island" choice, she says, "Why don't you tell someone who gives a shit?" It's funny like the last acts of Michael Douglas and Kathleen Turner in The War of the Roses are funny: dying, he puts his arm around his ex-wife; she, also dying, throws it off. Mordant, gallows nihilism. Amber begins the film as authentically punk: emotionally detached and made cold and calculating by too long among the nastiness of the world. She's like Darcy in that way: removed, insulated by a worldview that sees everything in terms of metal and meat. Amber gives balance to a spectacular bit of business, too, when an attack dog Saulnier sets up to be a stinger acts in a very dog way and ignores everything to rest its head on the arm of its master. Asked to be the straight man to a running joke about the essential "fakeness" of its world-weary hipster heroes, Amber instead assumes the position of power by announcing that for all the things they--and we, by extension--have seen, she alone will emerge from this with no sense of irony or mordant humanism. She doesn't care about you, even now. She just wants to break the rules.