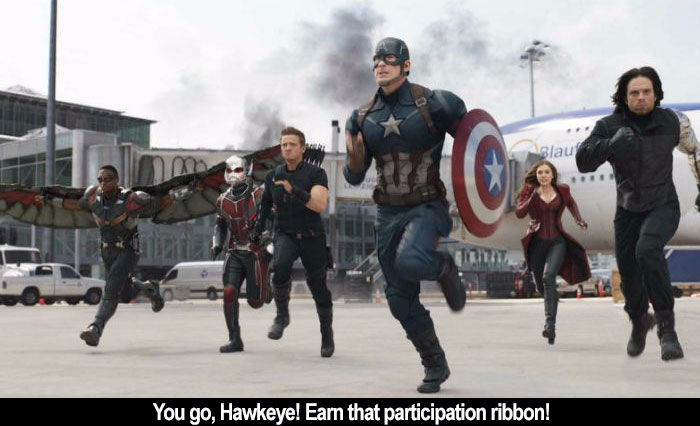 by Walter Chaw The Russo brothers' Captain America: Civil War (hereafter Cap 3), better-titled "Captain America: Gosh, That's a Lot of Characters" or "Captain America: Spider-Man," is an hour of dull exposition, an hour of fanboy service, and an absolutely fantastic half-hour of Spider-Man (Tom Holland). It continues storylines of which I have no memory while giving more and better time to women characters after the kafuffle around sterilizing Black Widow (Scarlett Johansson) in Avengers 2: Gosh, That's a Lot of Characters, thus making her a "monster." Chief benefactor of that largesse is Scarlet Witch (Elizabeth Olsen), "Wanda" to her friends (not only are there too many characters--most of them have two names), who struggles through a fetishist's idea of a Russian accent and carries the introspective weight of the 2010s on her shoulders. The film is about two things: Like Batman v Superman: 9/11 Has Made Us Monsters, it's about the casualties of superpowers waging war with one another over civilian populations; and it's about the role of Western determinism in our current state. It's like Skyfall in that way, positing that the West has a moral responsibility to police the rest of the world, whether the rest of the world would like to be policed or not. It's a theory that only works if the West holds fast to its evergreen ideals of truth and justice. This is different from the solipsistic, Byronic nihilism of BvS, because the character of Captain America (Chris Evans) is so explicitly child-like in his goodness that he becomes the manifestation of an idea every action in the film either runs in conjunction with or in tension against. Superman, too, should have represented that ideal, but alas, on Zack Snyder's watch he's just another emo Spidey.

In Cap 3, Captain America makes the decision to stand with his WWII buddy, Bucky "The Winter Soldier" Barnes (Sebastian Stan), even though everyone else wants to kill Bucky. There's also stuff involving a new United Nations (snicker) resolution (snicker) about how the Avengers team of superheroes will only be deployed at the UN's discretion. This allows for a terrorist bombing (a suicide bombing occurs earlier in the film, lest there be any question what this movie is about) and creates further complication when half of the Avengers decides to comply with the accord and the other half doesn't. And it paves the way for a new character, Black Panther (Chadwick Boseman), the alter ego of T'Challa, the king of some African nation that announces its royalty with a wood flute on the soundtrack. It's the equivalent of a gong scoring the entrance of a Chinese person, but since there aren't any Chinese superheroes until July, when Gene Yang finally gets to make Superman Asian at that other studio, it's not a problem yet. Black Panther is like a dude Catwoman, meaning he's completely covered up in body armour instead of sexed-up in latex, but I digress. I don't digress as much as Cap 3 does, however, as it engages in the thankless task of weaving together ten films' worth of obsessive plotting, including holodeck flashbacks (complete with digital de-aging tricks that made me think of Less Than Zero-era Robert Downey Jr.) and more locations than a James Bond travelogue. At some point during the bloated slog, Stark/Iron Man (Downey Jr.) asks Spider-Man/Peter Parker if he has a passport. Of all the self-consciously meta jokes in the piece, this least intentional is at once the wryest.

Anyway, Captain America and his antiquated romanticization of American values choose to defend Friendship in this one--and Loyalty, and foreign intervention--at the drop of the proverbial hat. He's a boy scout, but darkened a little here by a secret he's been keeping from good pal Stark/Iron Man. The cleaner version of him, if that's possible, is young Peter, whom Stark enlists to fight on his side against Captain America. Stark represents the rule of International law (snicker) in this scenario, siding with Secretary of State Ross (William Hurt) against Captain America, which is initially fascinating because what if the military-industrial complex was reticent to intervene in international affairs without international approval and that reticence was, in fact, what was causing a lot of the troubles in the world? Spider-Man represents the uncomplicated euphoria of being on the right side without any shades of grey dirtying the moral landscape. He is the idea that individuals can still make a difference. Captain America is the representation that individuals can do amazing things that have countless unpredictable collateral outcomes. Spider-Man puts people in jail; Captain America makes otherwise ordinary people into monsters. Cap 3 further muddles things by suggesting it's our propensity for dropping cities on folks caught in the crossfire of obscure disputes that radicalizes them--except in the United States, where we radicalize our own terrorists by allowing Republicans to scare everyone. Cap 3 touches on that, too, when it has the villain (Daniel Brühl)--who is not super-powered, just radicalized--deliver a speech about how if you destroy a civilization it will rebuild, but if you have it destroy itself from within, it will stay destroyed. That's us, right? I mean, I saw this movie on the day Donald Trump became the pre-emptive GOP nominee for President. Sneaky.

So while Captain America's idealism is the thing around which, eventually, every faction in the film coalesces (an ambiguous outcome if ever there was any), Spider-Man represents the gee-willikers school of unexamined determinism. Peter is a high-school kid who declares without declaring it that with great power comes great responsibility. That's exactly the thinking that finds us extending militarily into every part of the world. We believe in our absolute right and the unimpeachable virtue of our interests. But Captain America is about fixing the world; Spider-Man is about fixing Queens. I bet Spidey gets the same crowds at his rallies as Bernie Sanders. In 2016, the belief that we're always the good guys in the world has taken a few hits. Cap 3 acknowledges the shift in thinking without engaging in it very much. The characters wrestle with it--and with each other in endless shakycam CG fights (the best of which one on an airport tarmac, because: Spider-Man)--but come to the conclusion that America does, indeed, have the might and duty to impose its will everywhere. The post-film stinger, though (and there are two credits-scene epilogues to wait for), showcases Black Panther in his technologically-advanced Panther Cave in deepest Africa. A trailer for Ryan Coogler's upcoming standalone film (indeed, all of Cap 3 is essentially a bloated but effective trailer for Spider-Man: Homecoming), it's also a moment in which the focus of these movies shifts away from a suffocatingly Ameri-/Eurocentric vantage. Where the threats in the Captain America series have to this point been Cold War threats, up to and through Cap 3's non-starter subplot involving Universal Soldiers, these closing minutes hint at a shifting of power in the Marvel universe. If it happens, it's only a reflection of the fragility of our collective conscience: Our kaiju eiga are suddenly concerned more with the victims than with the heroes, in direct proportion to how little concerned the heroes seem to be with their victims.