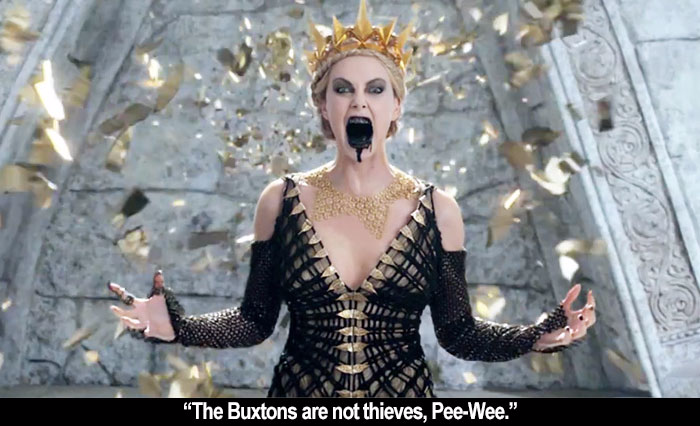 by Walter Chaw It's not offensive, or provocative, or particularly funny, or especially exciting. It doesn't do anything very well, but neither does it do anything very poorly. It has a ridiculously overqualified cast game for anything in the way that good sports are when engaged in a losing battle against poor pacing and essential silliness; frankly, I don't have anything against silliness per se. In that spirit, Cedric Nicolas-Troyan's The Huntsman: Winter's War (hereafter Huntsman 2) reminds a lot of pleasant disasters like Ladyhawke and Krull, with its biggest crime maybe being that it's not ridiculous enough, given how the fantastic commitment of Charlize Theron, reprising her role from the previous film (which I'm sure I saw and probably reviewed), seems ultimately squandered. A shame that she's in the movie for about five minutes, spending some of that as a CGI phantom and a lot of that screaming. It's telling that she still manages to be the most interesting thing in it.

She's Ravenna--and dead, I think, yet haunting a mirror. An opening flashback shows her sister Freya (Emily Blunt), whose name sounds like the Norse goddess of fertility and also, somehow, like "frigid," maybe intentionally. Maybe it's meant ironically as "happy," because the German word for...you know what? Never mind. Freya, because she's an X-Man, has a superpower but won't know what it is until she has a trauma. Sure enough, trauma happens, and she learns that she is Iceman. Ravenna also has a superpower, though I don't know what it is. It doesn't matter. Flash forward and Freya slowly expands her kingdom with an army of captive soldiers, all of whom were abducted as children and taught that there is no love in the world. Her two best fighters are Sara (Jessica Chastain) and Eric (Chris Hemsworth). There are also dwarves (Nick Frost and Rob Brydon) and, um, she-dwarves (Sheridan Smith and Alexandra Roach) for comic relief, I bet. This is taking a long time.

Huntsman 2 is one of those films for which it's impossible to provide a plot summary because the plot is just a checklist. (And not even an interesting checklist.) There's some fighting, there's some snarling, there's judicious and injudicious use of CGI, there's walking around and witty banter. But mainly there's a lot of time marvelling that these actors are in this movie. Hemsworth still manages to be charming through his bargly-bargly accent; Chastain is so Method that she's a giant bucket of water; and Blunt reminds of the time she was slated to be the next Helena Bonham Carter period-piece/Merchant-Ivory staple. It's Theron, though, who rampages through the picture with the right kind of spirit. Without a lot of squinting, it's easy to place Hemsworth and Theron as the prime drivers of this sequel: the one because he seems like an affable sort who's keen to stand there with his blonde hair blowing around, the other because she's a badass and understands that a movie like Huntsman 2 is another opportunity to create a ferocious female character in another gynocentric action "franchise." (Ah, scare quotes.) Huntsman 2 is like a skeleton of a film, or a rehearsal for another one. The good thing is, it doesn't hit too hard anywhere it would hurt, anyway, and it goes without saying that it won't leave a mark.