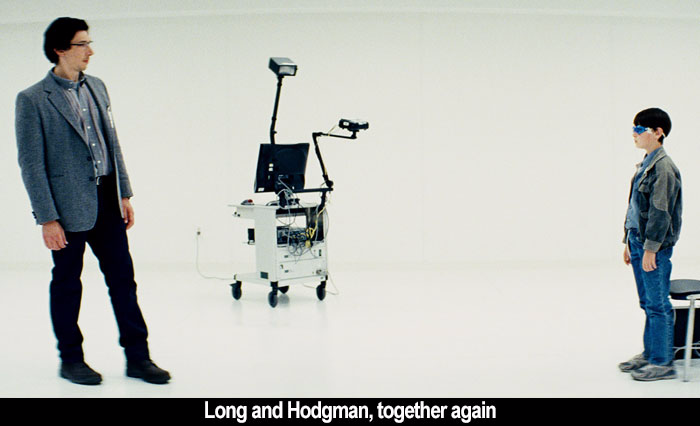 by Walter Chaw Jeff Nichols's Midnight Special is beautiful. It's a film about aspiration and sacrifice. It believes that the world is still a mysterious place anchored by love and hope and devotion to simple ideas about how hard it is to be a parent--and how important. It's about nurturing a thing with all your heart and letting it go when it's strong enough. It's about listening when it's the last thing you want to hear; it's about believing there's a future for your kids even if all evidence seems to suggest the opposite. It's like Tomorrowland in many ways, but mostly in its suggestion that there's a place maybe where things feel like they used to feel when you were a kid and everything was still possible. Even though nothing made sense, things would make sense one day when you were big. Midnight Special deserves its comparisons to films like E.T. and Starman and especially Close Encounters of the Third Kind. It works in the same small places with ordinary characters who grow to fill larger, echoing spaces. Nichols puts us in medias res with Roy (Michael Shannon) and his best friend Lucas (Joel Edgerton) on the run from cult leader Calvin Meyer (Sam Shepard), having fled at some point before the movie starts with Roy's son, Alton (Jaeden Lieberher). We learn it was around Alton's oddities that the cult largely formed. We learn that Alton's oddities are perhaps supernatural, or extraterrestrial, or interdimensional. It doesn't really matter. They're profoundly strange, and there are times it appears that he's able to tell a little of the future.

The Authorities get involved, and like in most of these films, there's a particular Man in Black who is empathetic with the Other. This one is Paul Sevier (Adam Driver), who carries a thick file and a clipboard and pronounces his name with careful zeal, as if he knows he's in a delicious film as its most delicious character. Paul wants to know how it is that Alton can intercept secret satellite transmissions, and what a particular date and set of coordinates means, and why Alton and Roy want so desperately to get there on time. Midnight Special is about a lot of big, adventure-movie things, but mostly it's about relationships and faith. Nichols talks about these two things repeatedly in his work. In Mud, his most acclaimed film, two boys develop a friendship with a guy living in a boat in a tree, and in Shotgun Stories, his directorial debut, literal and figurative scars define a roadmap between three warring brothers. Midnight Special's closest analogue, however, is Nichol's second film, Take Shelter, which finds muse Shannon in an agitated state, possessed of terrible knowledge and saddled with the responsibility to hold true when his family questions his sanity. Faith and relationships, the two strongest ties that bind: neither possible without the other. The method to Nichols's magic is that he isn't content to test these bonds in controlled environments. Midnight Special and Take Shelter, my two favourites of his, winnow the chaff with elements of the supernatural.

Nichols's narrative structures remind of the insular peculiarities of Flannery O'Connor or the provincial mythologies of William Faulkner; all of his films exist in the same "county." All of them draw from the same well of images. In each, there's a moment when a character will look up at the sky as though they're seeing it for the first time. He's cited Mark Twain as a primary influence, but I don't see the same kind of self-consciousness in Nichols's work. He's deeply involved in the creation of a new southern epic. Midnight Special is essentially a road movie--maybe a Sugarland Express? It inspires comparisons not because it's derivative, but because it's difficult to place exactly how his movies make you feel without referencing other movies that made you feel the same way. Roy and Lucas and Alton travel by night because it's dangerous for Alton to be in daylight. Eventually they meet up with Alton's mother, Sarah (Kirsten Dunst, incredibly warm), and then, in one of the film's few, cannily-utilized special-effects sequences, Alton can be in the sun again, and his needs become more urgent. But it's not about all that. It's about the moment where Roy meets Alton's eye before he leaves to do something dangerous and brave: Everything goes unspoken there because nothing a father can say to his boy at terminal junctures can define the weight of the moment. Alton shares a glance with his mother, too. Midnight Special is a declaration at once that there are ties eternal, however brief, and a place where sacrifice isn't sacrifice--and where everything is still possible.