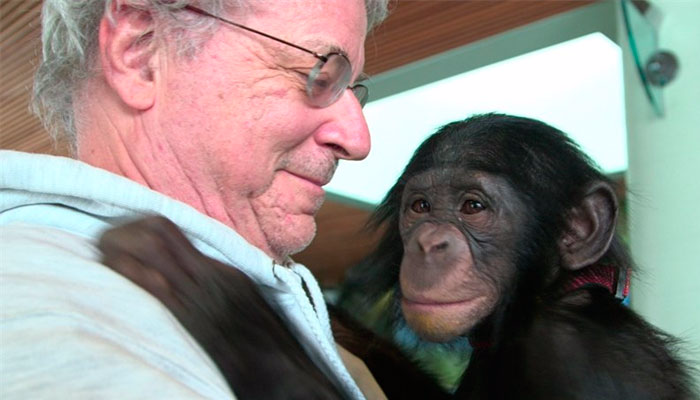 by Bill Chambers As an idealistic young lawyer, Harvard law professor Steven Wise went looking for the biggest "underdog" he could possibly represent and realized that animals were it. He founded the Nonhuman Rights Project (NhRP) to aid any and all "autonomous" wildlife in cases of abuse, but Unlocking the Cage, the latest from the prolific team of Chris Hegedus and D A Pennebaker, zeroes in on his efforts to liberate some chimpanzees from the horrid conditions at a state medical school and various cut-rate zoos by getting a judge to grant them "personhood." He's met with incredulity and ridicule by members of the court and media alike, who bristle at his ill-advised correlation of chimps with slaves. (The press is equally reductive when they jokingly accuse Wise of setting in motion a real-life Planet of the Apes.) And Wise's pursuit of habeas corpus for the effectively imprisoned primates has the unintended, Kafka-esque side effect of setting back human rights by forcing a redefinition of personhood that renders ineligible those who "cannot bear any legal duties, submit to societal responsibilities[,] or be held legally accountable for their actions" (i.e., not just chimpanzees but children and the mentally-impaired as well). But Wise is not a stupid or dangerous figure--if anything, the film doesn't find enough wrinkles in his righteousness. Compared to the obsessive subjects of previous Hegedus and/or Pennebaker docs like Bob Dylan, James Carville, or even the Startup.com guys, Wise's single-mindedness is blandly wholesome, and his only advertised idiosyncrasy is his use of the redundant "non-human animals" to denote his clients, which says more about his empathy and push for equality than almost anything else. As an activist doc, Unlocking the Cage may be too timid about going the full PETA for its own good; that Wise's chimps keep dying before he can save them is abstracted if not mitigated on screen by the fact that many of them are only names on a piece of paper, off limits to the filmmakers, and the stock footage Pennebaker/Hegedus have chosen tends to highlight the animals' considerable intelligence rather than their jeopardy. That's not immaterial, but the depiction of Wise's advocacy could use a little more urgency.