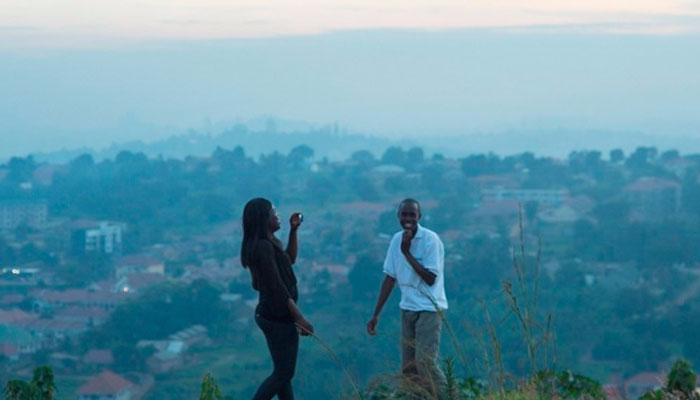 by Bill Chambers Cleopatra Kambugu and her husband Nelson Kasaija board a train. Although the seats in their sleeping car are discouragingly narrow, Nelson consults the passenger guidelines and sure enough sex is not explicitly forbidden. It's sitcom-cute that he checks, but his impulse to do so also creates a palpable unease; the accumulation of ominous imagery at the start--a barbed-wire fence; a front door, open though not beckoning; the word "Uganda," imposed and imposing over a dismal horizon--suggests there is some Orwellian element from which train travel can only tentatively shield them. Most of Africa but especially Uganda, where Cleopatra is from, is a hotbed of homophobia, and Cleopatra is a trans woman looking to return home after being shamed out of the country. To that end, she and Nelson are making their way to Thailand so she can have gender-reassignment surgery and clear up any ambiguities about her sexual orientation. It seems a little pie-in-the-sky, given how hostile Ugandans appear to be towards any kind of kink (in news footage, one guy spits Leviticus at the camera, the way a particular genre of Christian always does; The Pearl of Africa itself preemptively counters with an opening quotation of Galatians 3:28)--and indeed, it's somewhat disappointing that the film is an incomplete journey, ending on Kambugu's recovery in the immediate aftermath of her operation. But director Jonny von Wallström couldn't have found more charming, loving partners than these two, and he treats them like movie stars, even billing them as if they're actors. For a documentary, in fact, the widescreen-lensed The Pearl of Africa behaves a lot like a narrative feature; when Nelson's waiting for Cleopatra to get out of surgery, Wallström extrapolates his apprehension with a montage of the couple in happier times straight out of She's Having a Baby. It protagonizes them in a disarming way, and while the film could stand to be a bit less infatuated with the pair (it hermetically seals itself in their relationship such that the picture starts to feel shallowly subjective), its empathy is unimpeachable.