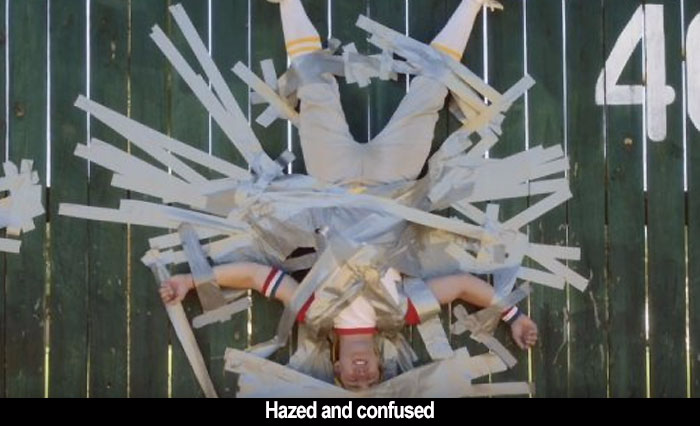 by Angelo Muredda It's easy to underestimate Richard Linklater, America's nice-guy filmmaker par excellence. If his chill aura more or less kept him out of the prestige-film sweepstakes until Boyhood, it also made the formal dice rolls of Waking Life and the Before trilogy land more impressively--and contrary to expectations--than they might have coming from a more bullish director. But Linklater's genial Texas cool proves a liability in Everybody Wants Some!!, a calculated, unambitious return to the rhythms of Dazed and Confused that picks up with a new crew in the next decade. Riding a wave of good vibes from cinephiles clamouring for another shaggy-dog hangout movie, Everybody Wants Some!! never quite earns either its Van Halen-cribbed exclamation or its status as a presumptive critical and audience favourite, settling for aw-shucks likeability and shopworn familiarity where Linklater's best work sneaks anthropology in through the backdoor.

"Glee" alum Blake Jenner stars as Jake Bradford, a freshman all-state pitcher moving into his campus's baseball-player residence and supposedly-dry party house the weekend before the first day of college, 1980. Armed with a megawatt smile and a box full of records, Jake meets his teammates and our ensemble, a motley crew of second-tier stars and jobbing actors--all about ten years too old for their roles as college kids, perhaps on purpose. For the most part, they make good on the opportunity their director has given them. Linklater, as Boyhood's twelve-year investment in the initially stiff, eventually soulful Ellar Coltrane showed, is a fine talent scout. Here, he gets good though not quite consistent or fully naturalized performances out of Glen Powell (formerly Trader #1 in The Dark Knight Rises, now registering a bit more on TV's "Scream Queens") as Finn, Jake's malleable, sharp-tongued guide to college, and "Teen Wolf"'s Tyler Hoechlin, who as the team captain plays the hyper-earnest Cyclops to Finn's scruffier Wolverine.

Besides his unassuming style and penchant for getting indelible character work out of a deep bench of performers, Linklater's best quality is probably his knack for easing into different--albeit strictly Texan--ecosystems, whether it be the suburbs of Austin in Dazed or the seemingly parallel universe of Carthage in Bernie. He brings some of that perceptiveness to the players' games of masculine one-upmanship, especially during a practice session that at once opens up their world spatially and restricts them to their individualized roles on the team, as both players and men. He verges on overkill, however, by loosely structuring the narrative around a series of club hops and party nights in different but equally stereotypically-conceived settings: a disco, a country bar, and an Alice in Wonderland inspired art-school party. Apart from illustrating Finn's anything-goes adaptability in blending into each setting (if it means picking up women), this tour feels oddly flat and indistinct for a filmmaker who usually revels in the intimate cultural rituals--particularly the dating rituals--of unique social spaces.

Yet the film's allergy to ambition is felt most keenly in its juvenile approach to the ladies who amble at the periphery, which is arguably self-conscious but no richer for it. Predictably, the women here are either elevated onto platforms or reduced to form-enhancing close-ups that wink to sex romps like Porky's while obnoxiously feigning gentility and kindheartedness. Where Boyhood's one-track preoccupation with burgeoning manhood was accounted for well enough by its choice of focalizer in Coltrane and tempered by its interest in the sacrifices and labour of single motherhood, Everybody Wants Some!! stays squarely with the bros--in all their pick-up artistry and sexist jokes--for the better part of the film, out of some half-baked loyalty to its characters' limited if unthreatening vision.

When the movie finally solidifies into a sweet-as-pie look at a sensitive jock showing his true colours with a girl he likes, it isn't just too late: it's unconvincing. You wouldn't normally call Linklater a cynical filmmaker, but there's something half-hearted about the way he stages Jenner's obviously improvised split-screen phone flirtation with theatre student Beverly (Zoey Deutch, looking and sounding just like her mom Lea Thompson circa Back to the Future). Although there's an unaffected sweetness to the pair's haltering dorm-room date, it's hard not to see Beverly as a trophy Linklater reserves for the best, most soulful jock of them all. Whether it's thanks to Jenner's eerie resemblance to a young Chris Klein or Linklater's sentimentalism about handsome guys who respect their dates, the coda feels less like a master filmmaker loosening up with a minor project than like a lazy, '80s-set remake of American Pie.