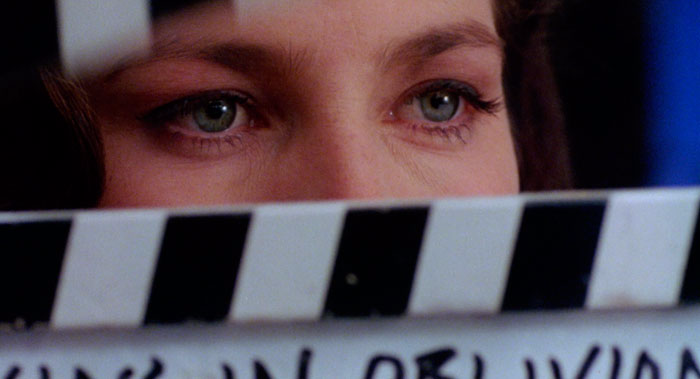 by Walter Chaw A film carefully structured in three parts, Tom DiCillo's Living in Oblivion demands tired adjectives like "offbeat" and "quirky" while dancing dangerously close to hyperbole along the lines of "brilliant" and "incisive." What it is, though, is its own beast--a meta-structure of dream sequences (the first two segments "are," the third is "about") concerning six takes of scene six--the devil's number applied to the trials of filmmaking, including technical accidents, the egos of the stars, and behind-the-scenes relationships that threaten professionalism. With those plates spinning, DiCillo layers in elements of fantasy bleeding into reality (the second section ends with the oft-repeated scene sloughing into "reality," then into dream), the final segment integrating spoof symbols (an apple, a little person) with a real symbol (the mother).

Living in Oblivion is dense and hilarious; it forces a non-conventional structure into a three-act theoretical progression, with its main characters essentially re-enacting the creation of a fantasy before ending the film with a series of daydreams indulged during a thirty-second recording of ambient sound (otherwise known as "room tone"). The trickiest part of the film, however, is when the assistant-director in the third segment reveals that something from the dream of the second segment to someone else has, in fact, happened to her in this reality. It occurs that this could be an accidental seepage--before it occurs that it doesn't matter if it's an accident.

All of which is not to say that Living in Oblivion is David Lynch territory--it's too self-aware for that, and too disinterested besides in its visuals, despite the peculiar realization that the look of the piece follows Lynch's evolving eye: the grainy aesthetic of Eraserhead in its first segment; the hyperreal Americana of Blue Velvet in its second; and the maddening slipperiness of Twin Peaks: Fire Walk With Me in its third and final. Rather, Living in Oblivion is not so much deranged as about derangement--the perverting crucible of creation in which independent filmmakers involve themselves. They're martyrs to their perfidious craft, and the picture is a document of their voluntary crucifixion.

Nick Reve (Steve Buscemi) is an independent film director working on his small picture titled, curiously enough, "Living in Oblivion" (only another layer of extra-text--and not in the expected way), a disastrous production that, from what we can tell, is doomed to be the sort of pretentious claptrap DiCillo's films generally are not--a satire, then, not only of the fluff of Hollywood but also the pretentiousness of self-conscious indie garbage. To that end, James Le Gros appears as a hilarious Brad Pitt construct (something DiCillo vehemently denies in his DVD commentary), and Catherine Keener plays a B-actress looking for a little recognition.

The success of Living in Oblivion lies in it not falling too far into its concept, avoiding becoming a trick instead of the dissection of process that it is. Its performances are excellent and its script is sharp; what keeps Living in Oblivion from soaring is that it's too self-consciously artificial, too clearly a product of a man who understands what it is that he's doing--intellectualism drowns out any chance for emotional connection. Produced in a difficult time for DiCillo (that is, between the failure of Johnny Suede and the difficulty of getting Box of Moonlight off the ground), Living in Oblivion reflects a certain cynicism in its execution that reads a little too much like superiority. All the same, the picture is meaty and witty, the sort of product that rewards a closer examination even as it buggers intimacy.

THE DVD
Columbia TriStar's DVD release of Living in Oblivion presents the film in a 1.85:1 anamorphic widescreen transfer that replicates the feel of the triptych film's varying stocks and lighting techniques while distracting with edge-enhancement artifacts. By and large, colour is well-separated and sharp and contrasts are pleasing and fluid. The Dolby 2.0 Surround audio isn't asked to do very much in what is essentially a talk-fest (Jim Farmer's music intrudes occasionally in what I find to be a bad miscalculation on the part of the filmmakers: the scoring of scenes belonging to the film-within-the-film), but dialogue is reproduced faithfully.

A feature-length commentary from director DiCillo finds the arrogant-seeming fellow sharing a few useful tidbits (such as the abovementioned Brad Pitt denial), though the hyphenate is largely given over to rehashing of plot or motive or, almost as bad, overpraise of the admittedly praiseworthy ("Steve is great in this scene!"). A 17-minute interview with DiCillo and Buscemi conducted after a screening of the film at last year's Golden Age of Cinema Film Festival features lively audience participation and serves as a leaner account of Living in Oblivion's production history than DiCillo's yak-track; less interesting is a deleted scene with Le Gros's Chad Palomino that would have been repetitive in context. Trailers for The Big Picture, Love Liza, and Auto Focus round out the disc. Originally published: April 3, 2003.

THE BLU-RAY DISC
by Bill Chambers The nomadic Living in Oblivion lands at Shout! Factory, who've treated it to a handsome Blu-ray presentation with supplements recycled from the DVD (in SD, where applicable), plus one nice addition: "In Our Own Oblivion: The Miracle of Making a Film", a 42-minute, HD retrospective documentary produced with enough distance from the earlier extras that there's not a ton of overlap. Tom DiCillo is front-and-centre for the piece, in which director Brian Ward introduces each new interview subject in black-and-white before transitioning to colour--a stylistic echo of Living in Oblivion itself. Producer Marcus Viscidi and actors Steve Buscemi, Peter Dinklage, James Le Gros, and Danielle Von Zernick all put in appearances, but the absence of Catherine Keener and Dermot Mulroney almost overwhelms the others' participation because of how much praise is directed at the former couple. The discussion of Dinklage's role lends a lot of credibility to Living in Oblivion's "Tito" segment, with DiCillo saying he learned that you can't just order a dwarf from central casting like a pizza if you're looking for a gifted performer as well. Brad Pitt's name of course comes up: DiCillo kicks himself for not doing more early on to quash the rumour that Chad Palomino is based on Pitt, who was in fact originally cast as Palomino but had to drop out. (Because of Legends of the Fall press commitments, DiCillo claims; for the record, Legends of the Fall came out only a month before Living in Oblivion's Sundance premiere--maybe he meant the earlier Interview with the Vampire?) Unfortunately, in the process of absolving Pitt, the late, great Patrick Swayze gets thrown under the bus--Le Gros apparently based Palomino using the camera lens as a mirror on Swayze, his Point Break co-star. All in all, a pleasant, effervescent stroll down memory lane with the principals.

The disc's content fills out 36GB of a BD-50 but only 21GB of that goes to the 90-minute feature, now preceded by the Shout! Factory logo. A wider berth might've resolved some of the dynamic-range issues of this 1.85:1, 1080p transfer, whose dense blacks swallow detail throughout the 35mm portion of Living in Oblivion, which begins at approximately the 24:30 mark. The image could also be cleaner, though a significant amount of the white speckling is baked into the low-budget, self-financed film if previous editions are any indication, and thus getting rid of it would require the resources, dedication, and underwriting of the Criterion Collection. The 16mm portion is of course grainy, especially the b&w footage (likely shot on high-speed stock to reduce the need for lighting equipment), but the reduction in noise after the 35mm shift isn't quite as dramatic as it was on DVD or the big screen. What I appreciate most about this presentation is the ripeness of its palette: The film has a Wizard of Oz intensity in its switch to colour that DVD failed to adequately convey. If black goes a little blue before its aforementioned drop-off, it nonetheless feels true to the source. The lossless 2.0 DTS-HD MA track restores warmth and bounce to Jim Farmer's score and admirably replicates the sonic qualities of oblivion (i.e., a film set), that sort of factory ambience that sound recordists and expensive microphones seek to muffle. Obviously the The Big Picture, Love Liza, and Auto Focus trailers don't resurface here but Shout! does bundle their own DVD version with the Blu-ray to share with your Luddite friends or relatives. 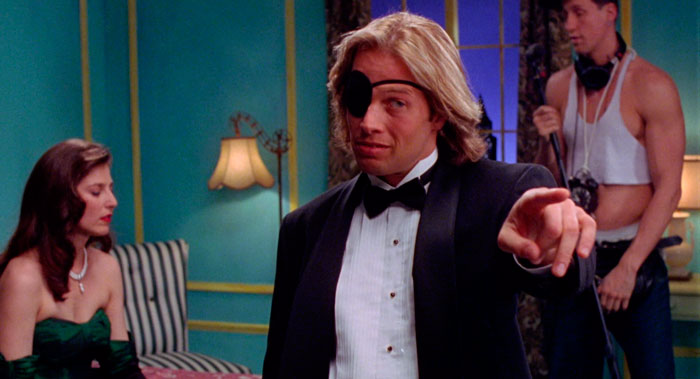