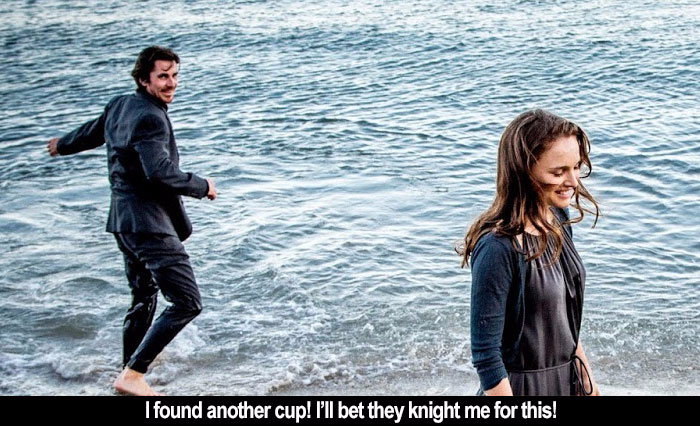 by Walter Chaw Terrence Malick's Knight of Cups is an obvious companion piece to Sofia Coppola's Somewhere and Fellini's 8½, and a less obvious spiritual companion to the Coens' Hail Caesar!, Cronenberg's Maps to the Stars, and even Fosse's All That Jazz. Its most direct influence is John Bunyan's The Pilgrim's Progress, with Malick borrowing phrases entire from its text along with its sense of wandering, seeking, and the pilgrim meeting various incarnations of sin and redemption on the road to salvation. Malick, as has become his hallmark, places people against images of eternity. In Los Angeles, the only external nature he can find is the ocean, and so he sends his "Christian" (Bale), playing a film director named "Rick," to the shore repeatedly with a succession of women who are incarnations of Bunyan's "Evangelical" and "Faithful" and "Mercy," including his wife (Cate Blanchett), whom he rejects and, if Malick follows form, who will be the centre of another story all her own. Rick wanders through streets, studio lots, highrise suites that are Bunyan's City of Destruction and Vanity Fair and, in a sequence where one guide (Natalie Portman) reveals that she's pregnant with either Rick's child or her husband's, Slough of Despond, before finally discovering peace of sorts alone in the Delectable Mountains of Joshua Tree.

There are elements of prophecy in Malick's pictures now as he addresses, directly, metaphysical considerations, from the fatherhood of The Tree of Life to the husband of To the Wonder to now the man at his essence in Knight of Cups. There's a marvellous, uncanny moment in the middle where Rick's father (Brian Dennehy) is seen in an empty office washing his hands in a basin of blood. It's an image that evokes childbirth and murder--the inner sea and the expiation of sin through Baptismal baths and other blood rituals. It suggests that no matter the modernity of settings, Man is ever engaged in ancient cycles. Malick has arrived at a place in his work where structure and narrative are subtext, hints of echoes mooring archetypes like gauzy archipelagos strung along sunless seas. Writing about Malick now inspires flights of poesy. It's easy to note his sources; it's difficult to pinion his methods. It's easy, too, to satirize a style that has become so insular and uncompromising, but it's difficult to replicate the feeling of reflection direct experience of his work can inspire. There are harbingers of his metamorphosis in the locusts of Days of Heaven, or the bird calls of The Thin Red Line; increasingly, his films are composed entirely of those brief moments. It's heady, and maddening, like trying to hear someone when their words are snatched now and again by the gyre that separates you. For a director already steeped in the language of dreams, a pair of actual dream sequences prove deeply disorienting.

If we take Malick's lead in Knight of Cups and follow his direct quotations of The Pilgrim's Progress as the first thread to pull, then find herein the idea that film itself is the key to the divine. It's a beautiful thought for the cinephile who has already devoted his life to finding God in metres of celluloid and the revelations of light. Who has heard his sacred ark predicted in Plato's cave. Find here, too, the repeated images of wings, or the scars where wings should go, paired with narration concerning the fleeting perfection of the soul and how the loss of its wings caused this perfect soul to fall to earth. It's "Paradise Lost". In fixing Rick as our avatar, the story's "Satan," Knight of Cups self-identifies as Romanticist in its melancholy, its sense of loss, even its sense of heedless privilege. "How do I begin?" the picture asks, thus mooring itself to the Modern as well as to T.S. Eliot and the journey of his own melancholy, heedlessly-privileged sojourner, Prufrock. Indeed, if one were to abandon The Pilgrim's Progress as the poem underscoring Knight of Cups, "The Love Song of J. Alfred Prufrock" would work just as well, inasmuch as it is, itself, already a riff on Bunyan.

But there's more. There's the culmination here of all of Western Civilization, in much the same way that film is the aggregate of the seven arts. There's a hallucination of a stage, with its intimations of mortality and performance. "Brief shadows" describe the totality of Malick's suffocatingly introspective visions. "I had a vision I was on a vast stage," Rick says. And, "Dreams are nice, but you can't love in them." He carries on involved, existential conversations with a stripper (Teresa Palmer) in the midst of her ministrations. It all feels like religion. It all is. And prophecy, the invocation through title cards of the titular Tarot card, which speaks of a figure with a message, moving slowly, peacefully, purposefully to deliver it. The card represents light and spiritual purity, intuition and connection to emotionality. Inverted, as it is in the film's poster, it suggests a disappointment of those things. The film references other cards in the deck: The Fool, who is freedom; The Hanged Man, who attracts but disturbs; The Tower, which represents the moment of intuition at the instant of calamity. Malick implies that there are no new experiences, only the seconds in which we can glimpse the order of things. The muted tone of Knight of Cups speaks to a sobriety in this kind of wisdom. It brings no profit to the wise and it represents a filmmaker in the latter portion of his career coming to an understanding that this was maybe what he was trying to say all along--that film is the means towards unearthing the meaning of life and that there is no meaning to life, but there is design. That design, in its infinite complexity and utter simplicity, is the Celestial City glimpsed by Bunyan's Christian through the glasses of Perspective. That design, you know, is beautiful.