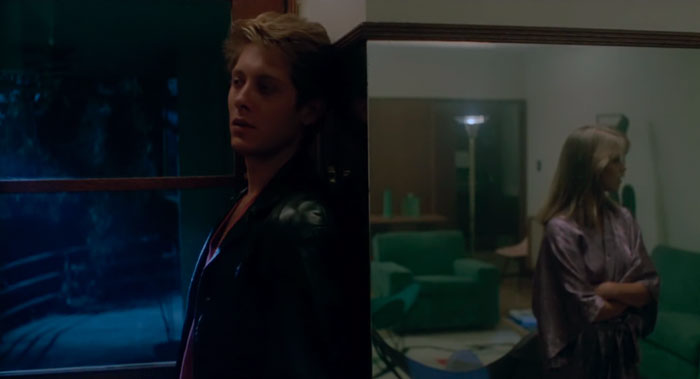 Please note that these screencaps are from an alternate source and do not necessarily reflect the Blu-ray presentation.

by Walter Chaw A quintessential dirty '80s thriller, Rowdy Herrington's frankly fantastic Jack's Back follows a Jack the Ripper copycat killer circa 1988 who, it appears, is interrupted during his last murder by earnest, likeable med student John (James Spader), who's quickly dispatched for his erudition. When I saw Jack's Back on VHS in '88, I was shocked by the brutality of John's murder and that it happens about fifteen minutes into the film. Rick (also Spader), John's twin, has a dream of his brother's murder and appears on the scene--to the consternation of John's grieving coworkers--to investigate the circumstances of his death. It's a fascinating conceit, or a silly one made fascinating by Herrington's execution of it and by a dual performance as subtle and compelling, in its way, as Jeremy Irons's turn in Cronenberg's Dead Ringers from the same year. Spader manages the neat trick of being two different people who aren't two easily-distinguishable types. You see the rebellion nascent in the "good" brother; you see the vulnerability in the "bad" one. Silly to say, maybe, but you see elements of one in the other. Spader's interactions with Cynthia Gibb, playing John's co-worker at a free clinic, are radically different from brother to brother, though not theatrically so. More than a thriller, Jack's Back is a brilliant character study.

Without much effort, Jack's Back could be seen, too, as a lost Walter Hill picture obsessed with the cost of masculinity, the nature of loyalty, and the essential loneliness of an individual beset by failures of heart and knowledge of the essential self. The film presents the two brothers as representatives of the duality of man: the one a nurturer and healer (coded as feminine), the other a loner and avenger (coded as masculine)--the moral of the story having something to do with how the one cannot survive in this world, while the other cannot be whole. Jack's Back would pair beautifully with The Big Easy, The Hidden, and Hill's Johnny Handsome, a trio of contemporaneous late-'80s flicks that deal with similar issues of essential man and existential divisions, likewise housed in genre exercises, which is historically the least intrusive way to address such questions. They are mythologies seeking to explain men, and do a pretty good job of it.

Rick struggles with his feelings of inadequacy in comparison to his med-school brother, regarding a bookshelf of medical texts with the perfect degree of ambivalent consideration. He recognizes that Chris (Gibb) maybe had a thing for his dead brother and is struggling to reconcile his own doppelgänger role in her affections. He calculates. He has visions, as well, of his dead brother's parting glimpses of the world, and what drives him is not any particular need to bring the killer to justice, but rather a desire, perhaps, to be seen as equally worthy as the memory of his dead brother. There's real sadness to Jack's Back. The person Rick wants most to be respected by is dead. There's a moment in John's apartment where Rick stops to observe a photograph on a dresser of Rick as a child. It's tragic because it's impossible to ever truly know another; it's moving because the photo suggests that John had already accepted Rick.

Jack's Back is about misunderstandings and mistaken identities. It's about seeing the truth but not enough of it, and I think it's as sticky as it is because even though it's possible to explain what it's about, it's difficult to explain why it works. The action is well-paced, the atmosphere is appropriately dark and seedy. Even the pathos of one of the killer's victims in her tableau mort replicates the feelings of degradation and loss those old crime-scene photos of The Ripper's victims evoke. It captures the end of the '80s cleanly and inspires in me dread and anxiety on a personal, absolutely subjective level. It's one of those movies for me. Without that personal connection, there is nevertheless about Jack's Back the sense that the world in 1988 was beset by paranoia and the uncanny and the sense that the promises made at the beginning of the decade were as hollow and mendacious as the promises made in the '70s. The picture works on multiple levels, in other words--the personal and the public, the sociological and the mythological. It's about bad copies. It's about our historical repetition compulsion. It's an audacious debut for Herrington, who's proven to have a knack for iconoclastic cult hits (he followed Jack's Back with Road House), and it was a coming-out party of sorts for Spader, who has arguably never been better. Jack's Back is worth the conversation.

THE BLU-RAY DISC
Shout! subsidiary Scream Factory brings Jack's Back to Blu-ray in a lovely presentation, beginning with a 1080p video transfer in the film's original 1.85:1 aspect ratio. Because this is the first time I've screened the movie on a format other than VHS, it looks amazing to these eyes. Forged from the original negative, the image retains the dimness and haziness of the production's lo-fi roots (Herrington cops to flooding the sets with smoke to obscure the lack of budget and contrive atmosphere), but detail is surprisingly sharp at times. Though compression defects crop up now and again (a bit of a Scream Factory signature), they don't last and seem oddly scene-specific. I have no real complaints. Likewise, the monophonic 2.0 DTS-HD MA track is clear and stable throughout. "The Making of Jack's Back" (24 mins., HD) has writer-director Herrington reflecting on the film with admirable seriousness, saying it evolved from the premise of a copycat killing. He also has many anecdotes about Spader's method performance that he'll repeat in his included audio commentary. The still-gorgeous Gibb meanwhile talks about her time on the shoot, concurring with Herrington that Spader's kind of a spooky dude. Herrington's yakker recaps plot now and again but takes pains to recall how Spader came to set in-character and devoted to the work. He comes across as a very decent sort, Herrington does, recoiling at the violence in his own picture. Gibb and Herrington agree again on a certain awkward scene more than midway through Jack's Back; I was charmed by her modesty. 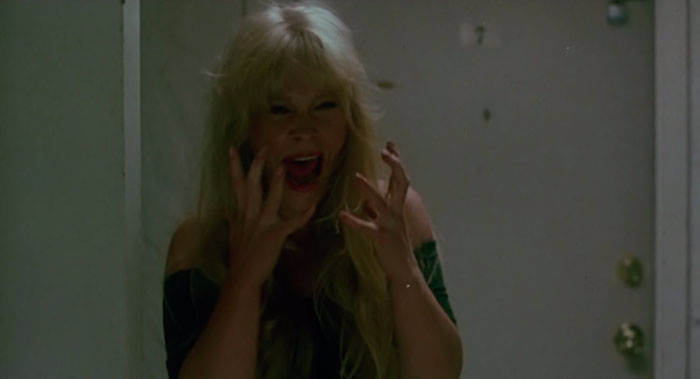