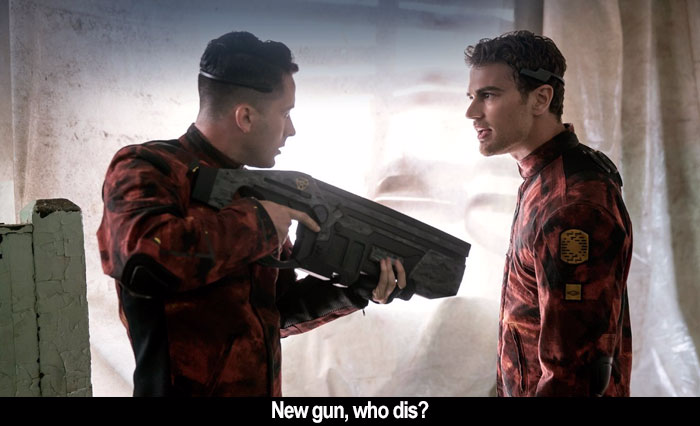 by Walter Chaw Remember those gauzy, halcyon days of youth spent playing "imagination" with your buddies on the schoolyard? Starting nowhere, ending nowhere, structureless? Child-development gurus would say something about how formless mucking-about is the way we first begin to socialize. Dungeons & Dragons made it into something like a communal form of spontaneous storytelling while offering a degree of gameplay and structure. Now Allegiant--the third or fourth (who knows?) film in the Divergent series, based on the third- or fourth-generation YA spin-off trying to capitalize on the Hunger Games-cum-Twilight phenomenon of smushing sci-fi/fantasy together with tween angst--has arrived to make manifest the endless exposition of developmental social psychology. In this one, Tris (Shailene Woodley, with her constantly-surprised blankness) and Four (Theo James) find themselves in a dystopian Chicago, I think, except that later they're taken to a place I believe is also Chicago, or at least Future O'Hare, thus as the characters repeatedly referred to "going to" Chicago, I was never for a moment not confused. I even checked Wikipedia, which confirmed for me that O'Hare is in Chicago. It is. Over the last few movies, which I've seen but don't remember except as a confusion of several franchises identical in my mind, Tris and Four have apparently discovered they're pawns in a game--A GAME, I tell you--involving their genes. THEIR GENES. It's Aldous Huxley, don't you get it?

It seems that Tris is "pure," which means something but I don't know what. Tris herself, midway through Allegiant, says, "I'm Pure, whatever that means." I'm with her. Tris is taken under the benevolent wing of David (Jeff Daniels), who delivers reams of monologue about stuff like genes and purity. Turns out you can't trust David (which is only a surprise if you've never seen, read, or listened to anything before), leading to action sequences so flaccid and ill-conceived that it's possible to dissect them while they're happening, like, "Oh, that was supposed to be a climax point," and, "Oh, that's the expository bit"--you know, like you were in that submarine ride at Disneyland and dozing off but forcing yourself to comment on things for the sake of the five-year-old on your lap. Like that. There are other people you can trust and can't trust and you know which is which because of the performances, which feel like not first takes, but first-day read-throughs, where real actors are starting to build ideas in their head about how they might want to play the subtext of scenes. Consider Miles Teller, who people tell me is very talented and the next big thing, and how he plays devious "Peter" as the snide, cowardly, wise-cracking Judas to the beat of his own drum. (You see what I did there? I will also try to insert a secret reference to Fantastic Four to keep myself interested in this review.) There is never for a moment any reason someone shouldn't shoot him in the face. He's somehow the most unlikeable character in a movie that also features Zoë Kravitz.

I will note that there are moments where Allegiant nods at feminism. Like when Kravitz's character tells a different male character that even though she's straddling his leg, if he touches her, he'll be sorry. (Which is probably the warning best taken in this entire mess.) Also, the main bad person is portrayed by Naomi Watts, who fifteen years ago delivered an extraordinary performance in Mulholland Drive, one of the best American films of the last twenty years, and now finds herself in Allegiant. It probably wasn't very hard for her to find motivation to play someone who wants to release forgetting gas on the public, just so her arch-enemy (Octavia Spencer, all pursed lips and constipated expressions) will forget they are enemies...and then become friends, I guess. This comes at the end of two full hours of things happening solely because they're the next thing; endless desperate exposition; and a little Marxism-cum-Skinner to hit the applause lines about how you can't quantify the human soul. That Allegiant's an anthem for fetal philosophers is a given; would that it weren't itself so undeveloped and myopic. Here's the good news, there's a sequel coming along in a few months to wrap everything up. Can't wait.