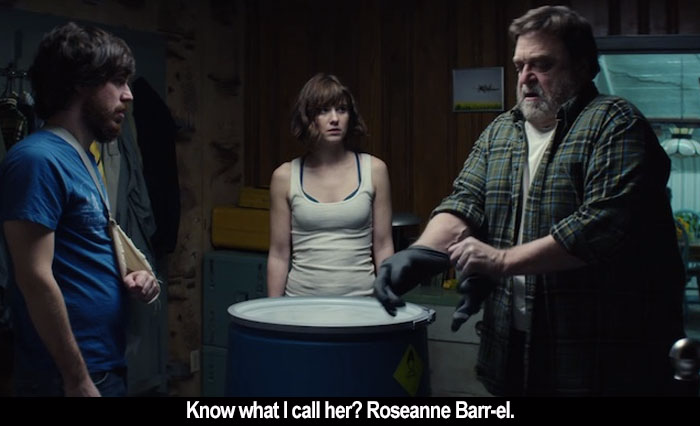 by Walter Chaw I don't believe that art ever occurs in a vacuum. I believe that movies, no matter their relative quality, speak to the time in which they were created, eloquently or accidentally--sometimes both. In that context, Dan Trachtenberg's 10 Cloverfield Lane, the follow-up to Matt Reeves's badly-underestimated Cloverfield (which itself pairs with Spike Lee's 25th Hour as the best elegies for 9/11 New York (Reeves's film even more in some ways, in its emulation of Japan's kaiju cycle)), is about the way the frightening underbelly of paranoid American fanaticism has suddenly gained legitimacy and voice in the mainstream. When speaking mournfully of his estranged daughter and how his wife has taken her away from him, survivalist Howard (John Goodman) mutters that some people just can't understand what's in the best interest of their survival. He's shut himself in an underground bunker with the bunker's architect, Emmett (John Gallagher Jr.), like some Egyptian Pharaoh, girding himself against an apocalypse that may or may not be personal. He's also "abducted" a young woman passing by, Michelle (Mary Elizabeth Winstead), though Howard would say he saved her from the end of the world. His plan, see, is that the three of them wait out the fallout from whatever seismic event did or didn't happen, as a makeshift family. No touching.

The madness and immediacy of 10 Cloverfield Lane mimics its predecessor. Both are diaries of our cultural Ragnaroks, identifying the seeds of our destruction in the arrogance of our mien, the steadfast denial of fire when there's fiddling to be done. Howard sees the coming conflagration. Maybe. He's like Curtis in Jeff Nichols's Take Shelter: the storm's coming; why isn't anyone listening? Howard has many films on DVD and VHS they can watch. One of the titles is Cannibal Airlines. Another is Pretty in Pink. Armed with a bottle of Lagavulin and her iPhone, Michelle has just left her marriage or her fiancé, one of those, when she wakes up chained to the wall in someone's basement. Her resourcefulness is on full display in an early silent sequence as she plans her escape. Trachtenberg's use of his limited space is brilliant--he honours Chekhov's maxim to a T in that everything he introduces becomes part of the plot by the end. There's a moment towards the middle that changes Michelle's mind about Howard, and then a moment that changes it back and then back again. Affiliations fluctuate in 10 Cloverfield Lane. We think Howard is maybe one of those sickos with torture dungeons, but then why isn't there anything coming through the short-wave radio? Is the air outside really corrupted, because the skies are blue and the wheat is blowing--and what's that form over there by the truck?

The script--the storytelling--is extremely efficient. The performances are shockingly good, and as the movie moves along from one bravura set-piece to the next, the tension ratchets to a genuinely delightful resolution as 10 Cloverfield Lane, like its predecessor, suddenly morphs into a different kind of picture and you didn't even notice it happening. Through it all, Michelle identifies as another in a string of gratifying female protagonists in the American cinema. Of all of the things we took from Japanese cinema post-9/11 (the nihilistic horror, the vengeance, the kaiju superheroes who nonetheless destroy cities), this acculturation of women heroes who don't sacrifice their femininity to be heroic, who are heroic because they are heroes, not stand-ins for men, is the most gratifying. There's a moment at the end where Michelle figures out a sequence of things in fast succession, all anchored in her flick-flick-flicking of a Zippo, that is not merely a reference to that hoary old thing of fire among the savages representing knowledge and awe, but an actual moment in 2016 that replicates the feeling those savages must have felt at the moment of incantation. 10 Cloverfield Lane is the cinema of delight. It's smart as hell, it's about something even though it doesn't have to be, and if we get one of these every few years as cultural mile-markers of our decline, maybe we'll finally start to listen.