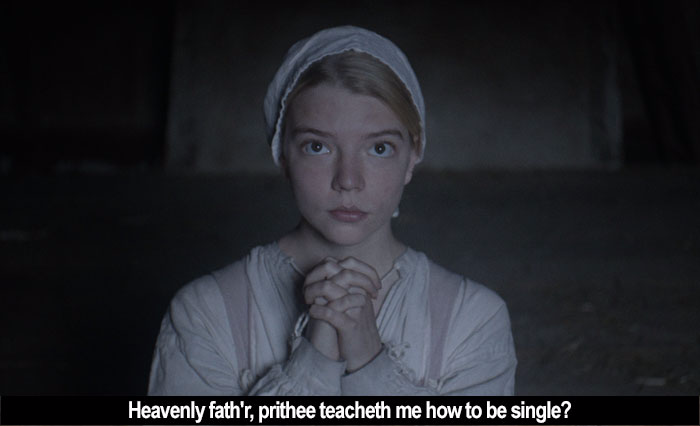 by Walter Chaw Robert Eggers's The Witch details a young woman's coming-of-age as a thing of wonder and, to her Puritanical community, an incalculable and infernal threat. It has analogs in any number of films dealing with female sexuality, unlocking avenues for critical dissection. It parallels Osgood Perkins's extraordinary February, rhyming it in not just tone but denouement, too, as young girls dance with the devil literally and metaphorically, and find it good. It parallels Jaromil Jireš's Valerie and Her Week of Wonders in its tale of budding sex and the surreal phantasmagoria that explodes in the imagination around such a thing. It parallels Park Chan-wook's Stoker, which shares a scene of illicit bliss and similarly decodes the incestuous loathing coiled in the belly of Hitchcock's Shadow of a Doubt. Speaking of Hitchcock, The Witch parallels The Birds, where the intrusion of a woman's heat makes things odd. There's a moment in The Birds where heroine Melanie Daniels is confronted by a group of women who accuse her of causing Nature to go weird, while in The Witch, a family alone in the American pre-colonial wilderness blames eldest daughter Tomasin (Anya Taylor-Joy) for the same thing. In both cases, they're right. The misfortune generally begins with menstruation or codes for the same--a blot of red on white cloth, a mention in The Witch that Tomasin has begun her period and thus should probably be sent to live with a different family as a servant in order to protect...well, not herself, anyway.

Fear of the feminine is pervasive in The Witch. Eggers finds in it one true throughline of religion: the suppression of women's sexuality, and the attendant wisdom that sex is the root of most of the terrible things people do to one another. Twenty percent of the Ten Commandments, after all, involves some variation of not doing unwholesome things to someone else's woman. But the problem isn't the sex, it's the repression of it. The film opens with the central family's expulsion from their settlement because, we infer, patriarch William (Ralph Ineson) is too Puritanical even for the Puritans. He packs up wife Katherine (Kate Dickie), Tomasin, her little brother Caleb (Harvey Scrimshaw), toddler twins Mercy (Ellie Grainger) and Jonas (Lucas Dawson), and an infant boy, and together they stride into the dark, where they quickly discover that God is either absent or awful. Their corn rots on the stalk. Their traps, which William has bought with his father-in-law's silver cup, are empty. And one day, when Tomasin is playing with her infant brother at the edge of the wild wood, he's taken. It's like a faerie myth, except that it's America at its dawn; one of the many fascinating suggestions the movie makes is that when the Puritans came, they brought with them both God and the Devil. Religion as contagion: virulent and indiscriminate. It infects the virgin landscape in The Witch with portent and meaning. Signs abound and one wonders, fairly, if they did before this imposition of omniscient sentience.

The family blames a wolf for the baby's disappearance. Later, an apparition in the forest appears clothed in a red riding hood. The Witch is about folktales that reveal themselves in this context as cautionary guides for survival in environments bent on murdering and eating the tellers. They are cultural fires against the night. Most are about sex. Caleb disappears, too, only to return to suffer at the attentions of his mother, bleeding him in her maternal instinct to heal him, underscoring the film's thesis that all is lost to good intentions--and that good and evil are opposite sides of the same devalued coin, senselessly ever in tension. Caleb, for the first part of the film, has been watching Tomasin's pubescence with surreptitious, guilty interest. At the river, as Tomasin does the wash, he looks away in shame and, later, asks his father if he's going to Hell like his unbaptised baby brother. "Only God knows," says William. The Witch is about damning the Natural. The twins, meanwhile, play a game where they talk to their goat, Black Phillip, and Black Phillip responds. Apples play a role at one point, reminding of other witch stories, including the one about a Garden, conspiring with Serpents, and knowledge of sin as the ruin of Man. There's another image that haunts, of a crow nursing at a woman's breast. It's straight out of Bosch, and like Bosch, it visualizes the atrocities that Christianity has conjured in the pursuit of oppression and its doctrine of fear. The real horror of The Witch is that the Puritans' beliefs have manifested malignancy. There is no sin without salvation, see, though Christianity owns no part in sin's creation. They're right: The battle isn't between "good" and "evil," it's between "doctrine" and "nature." Doctrine is books and civilization. Nature is blood and semen. Neither exists without the other.

Taylor-Joy, with her delicate features and wide-set eyes, projects a quality of vulnerability and surprise. When her character teases her little sister in a cruel, frightening way, it clarifies the insidious nature of sin. The film opens with Tomasin in prayer, confessing her sins (including violating each Commandment in thought...like murder? Adultery?) and asking for the strength to be better. You believe she wants that. You also believe that she's already too smart for this shit. A marvel, Taylor-Joy is matched by Ineson, who loads his William with infuriating weakness. Weakness that William tries to salve by endlessly cutting wood while the night creeps in on his family, exiled because of his ecclesiastical arrogance. He's trying to control what he cannot control. Even his husbanding of goats is quintessential, because goats would clear areas and made more sense as seed animals for sojourners looking to carve order from chaos. William and Tomasin have a key scene together that begins tenderly then progresses into recrimination. It drives the conclusion and epilogue, where The Witch goes exactly where it should: not into the dark, but into the ecstatic fire. Tomasin is a remarkable heroine in a cycle that has produced a few. She's more Furiosa than Rey, but she embodies elements of each. She is Leda, taking upon herself the vile abuses meted out by the patriarchy and producing a light of feminine vengeance that levels civilizations. The Witch says that the world is only terrible when you ascribe notions of good and evil to it. Is only mysterious when you presume to assign meaning to it. Is only dangerous when you seek to master it. It's made me feel bad for a full day now since watching it because, I think, I want to do all of those things out of my own fear for myself and for my children. I can't wait to see it again, but I'm afraid to.