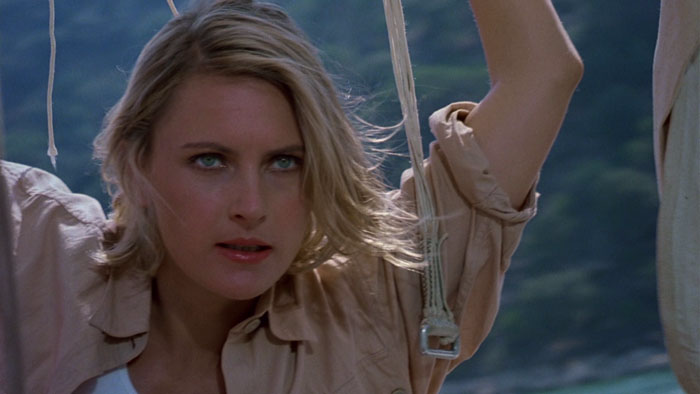 by Bryant Frazer Shout! Factory's program of disinterred but well-preserved artifacts from producer Charles Band's genre-flick factory Empire Pictures continues with this platter of aged cheese. I'm generally resistant to nostalgia and suspicious of claims that anybody's low-budget crapfest is so bad it's good, but the twofer on offer here is surprisingly engaging, juxtaposing a sloppy but fast-paced horror anthology with a silly but earnest action pastiche in a celebration of a bygone age of guileless indie filmmaking. While some of Scream Factory's excavations from that era are simply depressing (The Final Terror, anyone?), this highly-derivative double feature makes up for its lack of artistry with a generous helping of vintage latex creature masks, boggling non sequiturs, and 1980s signifiers that generate--at least for movie buffs of a certain age and proclivity--a strong sense memory of sticky floors, stale popcorn, and battered 35mm projection.

First up is The Dungeonmaster, a sci-fi/fantasy yarn about Paul Bradford (Jeffrey Byron), a brainiac with a Siri-like talking computer that competes for attention against girlfriend Gwen (Leslie Wing), who is kidnapped and transported to another dimension by evil wizard Mestema (Richard Moll). Bored out of his mind by the prospect of immortality but intrigued by Paul's command of magical technology, Mestema subjects the hacker to a series of seven nonsensical trials testing his powers. Each episode has a different credited writer and director (including SFX guru John Carl Buechler, making his directorial debut), which means the film lurches arbitrarily among disconnected fantasy segments. There is a giant stone monkey statue that comes to life; there is a horned cave-goblin named "Ratspit" who oversees a small zombie army; there is a little homunculus who, when vanquished, transforms into a dying angel in a see-through top. Of course it's terrible, albeit adequately performed by an admirably enthusiastic cast. Moll's spirited scenery-chewing in the framing storyline does a lot to relieve the tedium, and there's a strangely delicate moment midway through where a pair of animated dragons dance briefly in the sky above Moll, Byron, and the shackled Wing.

The portmanteau structure was a desperation move by Band, who was trying to reconfigure a foundering project without ditching 20 minutes or so of already-shot footage--a textbook example of cheapskate commercial filmmaking. And yet, truth be told, The Dungeonmaster had me from its opening gambit, an inexplicable slo-mo dream sequence replete with dry-ice fog that climaxes with a pack of aliens (?) appearing out of nowhere to drag a nude woman out of bed, mid-coitus, and through a hatch in the wall. Cut to black as the opening titles begin. The events of that sequence are never explained or even referred to again; it's a ballsy and frankly hilarious way to open a horror movie. The Dungeonmaster only approaches that zenith one more time, in the Charles Band-directed segment "Heavy Metal," in which Gwen is handcuffed on stage in a shredded body suit during a performance by rock band W.A.S.P., playing themselves. I cackled all the way through it. To its credit, The Dungeonmaster subjects its audience to only 78 minutes of this shit (which is plenty), and the anthology format continually reassures viewers whose attention may be flagging that a new bargain-basement bafflement is just around the corner.

The "A" portion of this double-bill is Eliminators. Directed by Peter Manoogian, who somehow parlayed his "Cave Beast" section of The Dungeonmaster into the leadership role here, it's gloriously silly--a Terminator-meets-Robocop rip shaken up with Romancing the Stone. There's just a whiff of Time Bandits in the mix, too. Tobacco heir Patrick Reynolds is Mandroid, a fighter pilot turned into a cyborg after a plane crash. He teams up with scientist Nora Hunter (Denise Crosby) and heads into the Mexican jungle to investigate the nefarious, clandestine activities of his time-travelling creator, Abbot Reeves (British character actor Roy Dotrice). On their way, they enlist the help of a scruffy mercenary river guide, Harry Fontana (Andrew Prine, more recently seen in Rob Zombie's The Lords of Salem), and a ninja, Kuji (Conan Lee). So why is this movie called Eliminators? Beats me.

Crosby classes up the joint tremendously in one of her first starring roles. Mostly, she's a pro who acts like nobody told her what kind of movie she's in--only an extended wet T-shirt scene near the film's midway point proves that she knows the drill. Prine's main function is to crack wise about the overstuffed proceedings, complaining out loud that he's stuck in a "goddamned comic book" with robots, cavemen, and kung fu. And Lee adds some vigour to the proceedings, like a rare ninja-vs.-Neanderthals smackdown precipitated by our band of heroes' meet-up with a tribe of hostile cavemen. (I actually found myself heading to WIKIPEDIA, curious as to whether Lee had any sort of pedigree in martial arts movies, and was tickled beyond words to learn that he's from Queens and his birth name was Lloyd Hutchinson.) 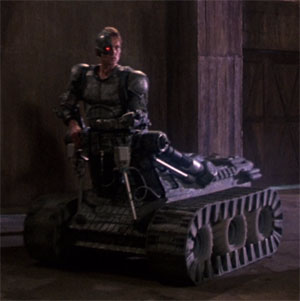 Eliminators is a relatively low-budget affair, and it's not going to impress anyone with its originality, but it is an entertaining throwback--it cheerfully pillages the 1980s genre filmmaking closet, synthesizing a little of this and a little of that into a diverting matinee feature. Sure, the characters are two-dimensional and the action is undistinguished. Of course, this is the kind of movie that establishes a Mexican location by soundtracking what sounds like mariachi music played on a Conn organ. And yes, the movie's signature special effect is Mandroid's mobile unit, basically a miniature tank with Mandroid's torso jutting up awkwardly, like a robotic mermaid figurehead, from the front of the machine. It reminded me, not at all unpleasantly, of the type of action-figure you'd find languishing in a Kay-Bee Toys bargain bin at an 80% markdown. What else do you expect? Eliminators has the inauspicious feel of an unpretentious comic book adventure, and as such it's charming. 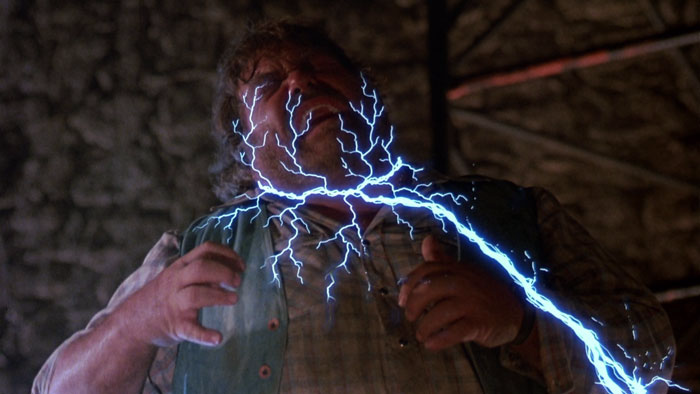 THE BLU-RAY DISC
Scream Factory pairs The Dungeonmaster and Eliminators on one Blu-ray disc in 1.77:1, 1080p presentations that are more than adequate, considering the films' vintage. The better-looking of the two is The Dungeonmaster, offered here in a version bearing the title Ragewar. Apparently the opening dream sequence, with its full-frontal nudity, was completely elided from the retitled PG-13 release of The Dungeonmaster, and that's the part of this transfer that's the softest and grainiest. Kudos to Scream Factory for restoring it. The rest sports very good dynamic range, solid colour fidelity and saturation (detail holds up well even in scenes lit through blood-red gels), and crisp details. Sound is likely as good as it could be--the 2.0 DTS-HD MA monaural track is clean and distortion-free, though it also reveals the limited dynamics of the source material.

Eliminators is apparently sourced from a release print, as cue marks are visible at reel-change points and the image is a bit softer and darker, with less ability to see into the shadows. (For what it's worth, Scream Factory opted to give The Dungeonmaster a higher data rate; it averages 26 Mbps for video, compared to 25 Mbps for Eliminators.) The 2.0 DTS-HD MA track is somewhat thin and harsh; the added directionality suggested by a stereo mix isn't really delivered in a meaningful way, and there is more noise this time around, especially during the end-credits scroll, suggesting the soundtrack, too, may have been ripped from an exhibition print.

Special features are limited to "Peter Manoogian: Evolution of a Director" (33 mins., HD), in which Manoogian recalls the making of both films. He discusses the production of Ragewar, including Band's dissatisfaction with his "Cave Beast" segment. ("Charlie preferred bigger monsters," he explained.) He goes into more detail about those special low-budget moments that were a part of directing Eliminators--like the decision to shoot in Spain rather than in the Florida Everglades as intended, the challenge of working with a line producer whose only experience was with soft-porn movies, and that time the production's special high-speed lenses for night shoots were appropriated for another Empire Pictures show. The interview is interesting enough, but the sound quality is weak: Although Manoogian is wearing a lavalier, the audio has a speakerphone quality to it, as if captured by a more distant mic. The only other extra is a two-minute trailer for The Dungeonmaster, in standard-def. 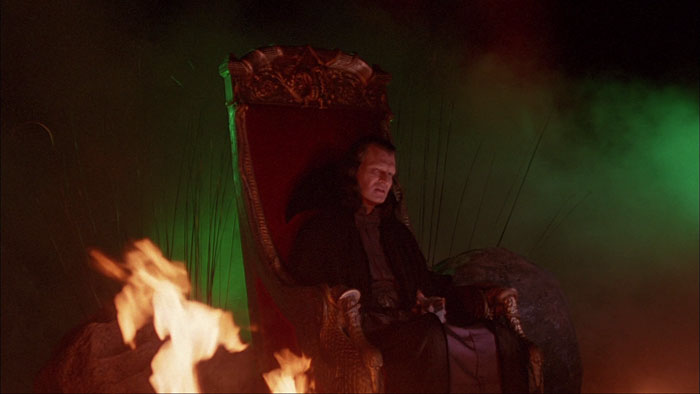