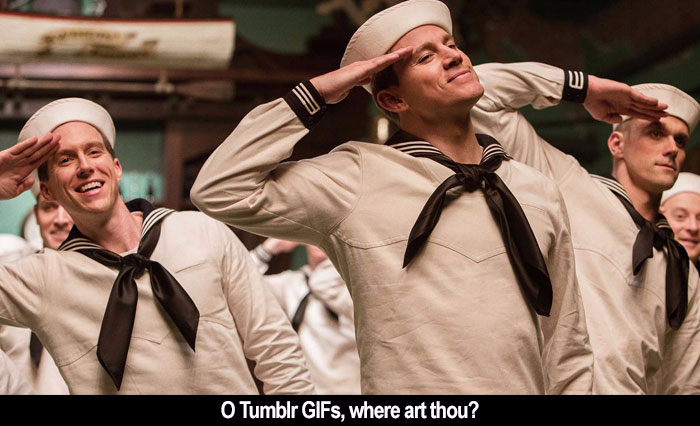 by Walter Chaw Halfway through the Coen Brothers' Hail, Caesar!, studio head/fixer Eddie Mannix (Josh Brolin playing Jon Polito) stands against the opulent, grand entrance to his golden-age Hollywood movie studio and talks about the coming of the future. There's a scene in a Chinese restaurant where someone pulls out a photograph of a mushroom cloud taken at a freshly-nuked Bikini Atoll and declares, solemnly, that it's a picture of the future. There's another scene where waves crash against a pair of rocks in a direct callback to Barton Fink, the Coens' other golden-age Hollywood homage, outside the bachelor-pad mansion of Gene Kelly-type Burt Gurney (Channing Tatum), who happens to be the head of an enclave of Communists (are there ten?) calling themselves "The Future." The Coens at their best describe spiritual blight. They do it in a lot of ways, across multiple genres. Hail, Caesar! opens with Mannix, a real-life figure in Hollywood tangentially-connected to George Reeves's death (murder? Suicide? Who knows?), in a confessional just a day after his last confession and a day before his next. ("Really, it's too much Eddie. You're not that bad.") Mannix--more fictional than actual, it should be noted, in exactly the same way that O Brother, Where Art Thou? is the most faithful adaptation of The Odyssey there ever was despite having almost no relationship to the literal text--indeed doesn't seem all that bad when most of what he confesses is lying to his wife (Alison Pill) about quitting cigarettes. "It's hard, Father." And he cries. The movie is about spiritual blight, and the sin that Mannix is constantly trying to confess is that he doesn't know what he believes. For me, the Coens are at their best when they tackle this spiritual blight through the prism of artists and their attempts to create. Every artist is a Frankenstein. Every work is a monster.

Hail, Caesar! is about the coming of the future in literal and figurative terms and how Mannix finds himself at a crossroads between taking a job with Lockheed Martin (the mushroom cloud) or staying in place doing, as he describes, something very difficult but that feels very correct. It suggests that HUAC was a good thing, because those writers were commies in collusion with a foreign state. And that it was a good thing because those writers were opportunistic, capitalist swine looking for their piece. They are guilty of spiritual blight. If Inside Llewyn Davis' closest analogue is Barton Fink, Hail Caesar!'s closest analogue is A Serious Man. They're both stories of coming to terms with the idea that although there is a God, there is no comfort in His existence. They're both stories of men who have given their lives to a belief. Fascinatingly, the Coens imply that God is the movies--divinity is the flicker of image on screen. I like this idea. I'm reminded of the Shroud of Turin hoax, the transfer of image to medium; that interplay of light. Stained glass in cathedrals. I believe that watching film closely approximates the physiological conditions under which Man first learned about his culture and his place in it. The moment of mythology, humanism, self-awareness. That's God, you see. At least it has been for me, in those dark, cavernous tabernacles, the movie houses of my baptismal youth. But awareness comes at a cost.

Parallel to Mannix's story is Baird Whitlock's (George Clooney). Baird is the biggest star in the Hollywood firmament, and he's headlining the spectacular from which the film takes its title. It's one of those Technicolor Bible extravaganzas. Baird is drugged and kidnapped by The Future. He wakes in their midst, arms himself with cucumber finger-sandwiches, and hears for the first time Marxist theories concerning the distribution of wealth. He's guileless. And fascinated. Hail, Caesar! posits that adherents to any faith are ultimately penitents before empty vesicles. A rabbi (Joe Dante regular Robert Picardo) has a beautiful moment where he responds to the question of whether or not Christ is being depicted "accurately" with an accusation that everyone in the room is, if not a moron, at least insane. For The Future, it's a writer's problem. It's a crisis of ego, fuelled by no other ideology than greed. Mannix receives a ransom demand for Baird's release. He secures the money easily. One of the throwaway jokes of the film is that the amount is so small. It slides right in next to a joke about Esther Williams-manqué DeeAnna Moran (Scarlett Johansson), who's a little pregnant, so her mermaid "fish ass" doesn't fit so good no more. And another joke where twin gossip columnists (both played by Tilda Swinton) believe the other is a discredit to their disreputable profession. We should also mention Burt's energetic On the Town number and paean to the love that dare not speak its name. The throughline is a mission to present a certain image to the public, no matter the sordidness of the personal apocalypse.

Mannix is the guardian of that projection of propriety. ("On account of how innocent you are.") Embedded in the knowingness of the piece is the notion that we've irrevocably lost something in our post-modern self-awareness: that smug satisfaction allows gaggles of freshmen appreciation classes to giggle at the rear-projection and mattes in Vertigo while losing sight of the fact that the artifice is the message. The artifice is the message in Hail, Caesar!, too--it's the Coens' career thesis. This is a movie that deepens with your knowledge of film history, it's true, but it deepens more with your knowledge of the Coens. The Big Lebowski is an adaptation of The Big Sleep, a book that takes place in Hail, Caesar!'s cultural history--its most trenchant moments come in the skeleton of the misapprehension of the tenets of nihilism that ironically informs the Tao of Dude. The Coens are great filmmakers but may in fact be better critics. Hail, Caesar! posits that we lose something when we "see through" Burt's dance with his buddies as smirkingly homosexual; when we don't think of our starlets as fresh off the bus; when we refuse to accept things at face value. There's a moment where Mannix gets the news that Moran has eloped with a schlub she met only a few hours before, and there's no register from our hero that their love isn't genuine, though we sure get a giggle out of it. Hail, Caesar! says that we're smarter, but we still don't know anything and, more, we didn't used to be dicks.

Hail, Caesar! is about the end of the world, the coming of the saviour, and how Hollywood is ever the reflection of prevailing attitudes. The timeline places it at the turn of the 1950s. Mannix is depicted as married, which he wasn't until 1952. Baird's biblical epic is in the vein of 1953's The Robe. Bikini Atoll was bombed in 1946. There's a segment from a movie that's been woefully miscast with Western singing star Hobie Doyle (Alden Ehrenreich); the bit of it we see during a hilarious Frances McDormand cameo borrows from the opening of Strangers on a Train (1951). Esther Williams's Million Dollar Mermaid, by the way? 1952. So Hail, Caesar! is a pastiche of Old Hollywood at its peak. It's like that hall of mirrors at the end of Lady from Shanghai, except reflected in every panel is another piece of our movie-love. The picture plays with industry artificialities and indulges in its fits of ego when Mannix assembles representatives of major faiths to ask them if they think his studio's depictions of "The Christ" are, you know, reasonable. Later, Christ is asked if he's a principal or an extra--the distinction earning him either a hot lunch or a box lunch. He's not sure. The only thing at stake, really, is that lunch. Hail, Caesar! does something interesting in that it suggests that the artifice and the audience's willing engagement in it is the exact simulacrum of the word that Baird, in the midst of his big Oscar speech, forgets: "faith." Mannix visits a studio Golgotha set and genuflects beneath the centre cross, which has the same disconnected impact as the funeral scene from Synecdoche, New York. No accident that a doddering, Freudian professor The Future trots out as their guru posits, essentially, the cognitive science of religion in the mind-body dualism. Hail, Caesar! says that much of what's wrong with us is our inability to enjoy something without critical distance anymore--the snarling posture of someone who's been abused has seeped into our relationship with the world. We complicate everything with our petty imperfections. It says that engaging, truly engaging, with the Cinema requires exactly the same mechanism as engaging with Religion. Hail, Caesar! is the Coens at their most and least cynical. Amen and hallelujah.