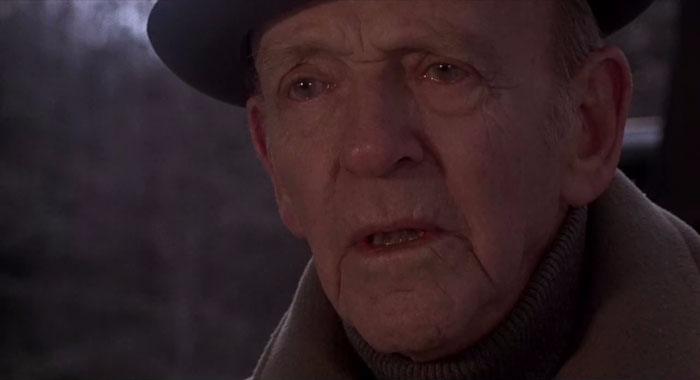 Please note that these screencaps are from an alternate source and do not necessarily reflect the Blu-ray presentation.

by Walter Chaw Jack Cardiff's reputation as a world-class cinematographer began, really, with the Archers, progressed through Hitchcock's underestimated, and gorgeous, Under Capricorn (every inch as beautiful a film as Powell and Pressburger's The Red Shoes, Black Narcissus, and A Matter of Life and Death), and was maintained in collaborations with the likes of John Huston, Joe Mankiewicz, King Vidor, and Henry Hathaway. He did two films with John Irvin: the great Dogs of War, and this, 1981's seedy, singularly unpleasant Ghost Story, which represents the final screen appearances of Fred Astaire, Douglas Fairbanks, Jr., and Melvyn Douglas. I think the biggest disappointment of the film is that it doesn't look better, given Cardiff's behind the camera. In fact, it looks like a TV movie (acts like one, too, as it happens); the possibilities of having Cardiff lens a classic ghost story in the gothic style are delicious and, until the last ten minutes or so, largely frustrated. Blame the picture's settings, various brightly-lit exteriors and contemporary environments (office buildings, college campuses)--even when the movie is in a grand old house, our aged heroes' Chow-duh Society huddled together in pools of shadow, scaring each other with spooky stories, the joke seems to be that someone is always turning on the lights.

It's one of myriad puzzling choices that were made in adapting Peter Straub's best seller back when, like the Lionel Richie vs. Michael Jackson debate, everyone wondered if it would be Straub or Stephen King atop the legacy list. Honestly, the only Straub novel I could finish is the first one he wrote with King, The Talisman. For fear of being dusty, Ghost Story doesn't want to be another take on The Innocents (a shame, because not only is The Innocents brilliant, it shares with Ghost Story Henry James's "The Turn of the Screw" as its chief inspiration) featuring a game cast of legends in their dotage (add Patricia Neal and John Houseman for an embarrassment of riches). No, it wants to play to the kids, and so it focuses in on the story of scruffy, skeezy Don (Craig Wasson, between this and Body Double cementing himself as Scott Bakula's fleshpot brother), who, following the suspicious suicide of twin brother David (also Wasson), breaks in on his dad's old-dude supernatural bridge party, telling his tale of shenanigans with an icy British lady--and how could he tell something was amiss?--whom he's convinced is somehow responsible for David's death. Turns out said lady (Alice Krige, distinctly unconvincing and already auditioning for Borg Queen) is the shade of Eva, who, in a Jazz Age flashback, is most-wronged by our quartet of codgers.

Oh, about them: Bluebloods played by Astaire, Houseman, Fairbanks, Jr., and Douglas, they share ghost stories to stave off the memory of their foul deed. Lately, it's not enough. That's not a bad premise. The only novella from King's Different Seasons not yet turned into a movie, "The Breathing Method", features a similar men's club. It's a set-up akin to Ealing's great Dead of Night, too, of course. The picture opens, in an odd echo of The Fog, with Houseman's character wrapping up a little chiller--then Irvin cuts to Wasson as the unctuous brother, falling to his death in surprising full-frontal glory. Ghost Story is like that. It has a misplaced lack of modesty reminiscent of the '80s slasher cycle, with both Wasson and Krige spending a good portion of their screentime disrobed. Wasson at one point does the weird Moscow on the Hudson thing of playing with his girlfriend's tits in the tub, only he does it with his toes. It's not intimate in this non-Sylvia Kristel context, it's unsettling--a bad miscalculation that has aged horribly. The ghost effect, a rotting corpse-thing whose chief purpose is to shock men off buildings and bridges, is overused, the product of the same malady as the weird sex stuff, handily stranding the film in a null space between the exploitation that seemed to be the rage in the early days of the decade and The Shining, the arthouse version of this material.

The Shining, arriving the year previous, is among the last hurrahs of the great American '70s. Ghost Story acts as the first confused salvo into the Reagan '80s and that decade's rage for simultaneous escalation of and nostalgia for the Eisenhower '50s. The Shining is about decay. Ghost Story talks about decay. The Shining is about implosions and collapses. Ghost Story is about creating mythological legacies and false selves in order to maintain power and position. Nobody gets out of The Shining alive, not really. Although there are multiple fatalities in Ghost Story among the principals, in the end the curious epilogue is that the insufferable ruling class is exonerated of their original sins. It's like if The Exorcist had an upbeat ending. Yes, it's awful. Uniquely awful, in fact. Contemporary reviews took pains to praise the cast, a condescending thing to do. It's hard to say whether they're good or bad. They're pros, and they've come to a place in their respective careers where they're playing second banana to lame special effects, boobs, and Craig Wasson on a quest to solve the naked falling murder of his brother. The obvious post-modern deconstruction of the piece is that the spectres suggested by the title are the ghosts of a bygone Hollywood sprinkled here and there--for example Douglas, who made as eloquent a statement on the pain of tradition's passage into callow modernity as there ever was in Hud. As far as these things go, Billy Wilder probably did it best with the card game in Sunset Blvd., thirty years earlier. 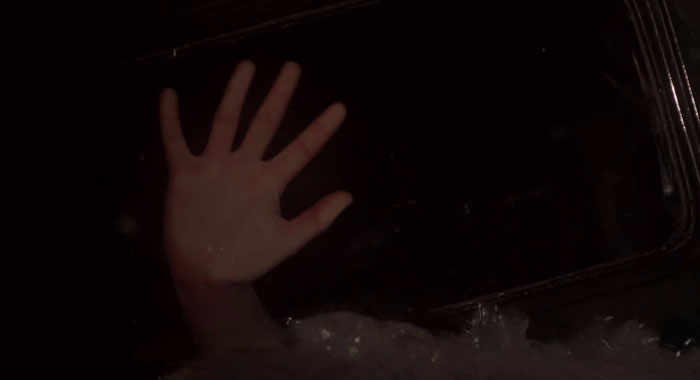 THE BLU-RAY DISC
Scream Factory brings Ghost Story to Blu-ray in its original 1.85:1 aspect ratio. The 1080p transfer appears to look as good as it possibly could--good enough to throw a few focusing anomalies into relief--with the exception of some overlooked print debris. Brown is the movie's colour scheme and so, brown it is. The makeup F/X, by maestro Dick Smith (doing career-worst work, I gotta be honest), and the matte paintings by another legend, Albert Whitlock, weather especially poorly under the cruel gaze of HiDef, as does the optical compositing--Wasson's starkers fall from the highrise is surreally unconvincing. The darker scenes show excellent shadow detail, but allow me to reassert that there aren't enough of them. So much of this film is overlit that it's actually...what's the word? Garish. Cardiff, man. I don't know what to tell you. The 2.0 DTS-HD Master Audio, a presumably faithful replication of an early Dolby Stereo mix, is extremely adequate. For the record, Philippe Sarde's score is absolute cornball excess. It blares, narrates, announces itself. It's any episode of "Hart to Hart". Nostalgic for all the wrong reasons, it's reproduced with unfortunate stunning clarity.

John Irvin records a feature-length commentary marked by silences but highlighted by remembrances of the legendary cast. There's not a lot of insight (frankly, there's more meat in Illeana Douglas's recollections of visiting her grandfather as a child on the set in her memoir), but I'm charmed by the image that these old guys gathered together every night for dinner around a large, round table and told each other stories in very much the same way as the Chowder Society. Irvin calls out a few matte shots, revealing in the process that while it was a bitterly cold shoot, the weather did not cooperate and give them the snow the picture's conclusion required. There's not a lot of meat to worry here and much of it is repeated in the video-based extras, but Irvin is a soft-spoken, self-deprecating presence and the track has its charms.

Credit parent company Shout! with a passel of special features, beginning with "Ghost Story Genesis" (40 mins., HD), a new interview with Peter Straub, who recites long passages from the source material for some reason, namechecks John Fowles and Henry James, and ends on a passive-aggressive note by saying he was very pleased indeed to cash all the checks written to him for the sale of his property. At this point in his career, his anecdotes are all practiced and edgeless. I guess I'm not a fan. What I will say is that as I was watching Ghost Story, there's this part where Krige, as the ghost Eva, promises her lover that she "will show [him] things [he's] never seen" in a supernaturally menacing sort of way that will be echoed exactly by Clive Barker's Cenobites in the novella The Hellbound Heart from 1986. Barker's brand of unsavoury operatic cheese (he's the Douglas Sirk of splatter) finds its root here, too, in an inexplicable subplot involving a circus performer (I think) and his pet feral child. (See: Lord of Illusions.) While I'm a diehard fan of Barker's writing, I'm surprised to learn at this late stage the extent to which he appears to have been influenced by Straub. And so it goes.

"Ghost Story Development" (30 mins., HD) interviews screenwriter Lawrence D. Cohen--not that Larry Cohen--and producer Burt Weissbourd. Cohen is particularly blunt, discussing the massive restructuring required to make Straub's novel into a movie, including, egregiously, the complete reworking of the bogey. My favourite bit is when he remembers not getting along at all with Brian De Palma as De Palma shot Cohen's adaptation of Carrie, and yet, look at the final product--whereas he got along famously with John Irvin, but... He trails off. Weissbourd gets on my bad side instantly by saying that movies are too limited to express the written word. Yeah, you're in the wrong business. Later, he reveals that he's now a novelist. Well there you go.

"Alice Krige: Being Alma and Eve" (28 mins., HD) finds the South African actress in fine form, still beautiful and extremely gracious about the entire experience. She repeats the wish oft-repeated in these features that someone had recorded the nightly dinner conversation among the veteran cast. She's not the only person, either, to mention how nice Craig Wasson is. I believe it; I'm a fan. Krige briefly touches on her breakthrough role in Chariots of Fire, but mostly it's boilerplate. "Albert Whitlock Visual Effects with Bill Taylor" (29 mins., HD) sees Taylor reminiscing about working with the master painter and revealing, in the end, his opinion of how and why the film just doesn't work. He's very complimentary towards his mentors, though he's also realistic about the limitations of the piece. He has a good Fred Astaire anecdote that's worth the listen. The audio on the piece is atrocious, however, captured by what sounds like the camera's built-in mic. Lots of wind and traffic noises, for what it's worth. A standard-def trailer and TV spots, radio spots, and an animated photo gallery (8 mins., HD) round out the presentation. 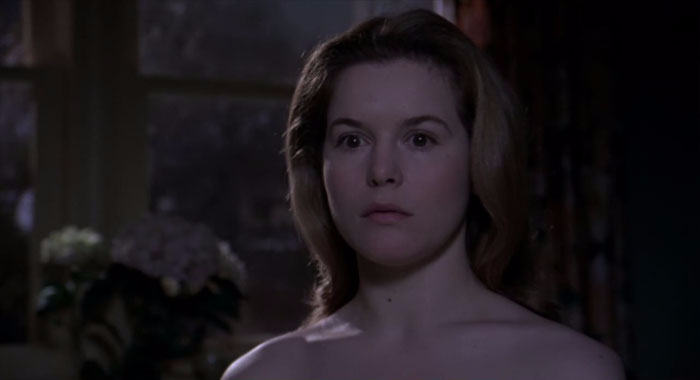