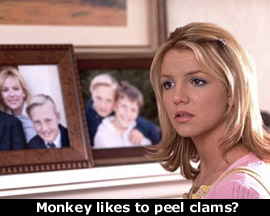 by Walter Chaw Crossroads is appalling and noxious. Consider how it maturely teaches that a young girl's choice to lose her virginity should be one based on careful consideration, and then has its heroine bed a tattooed ex-con she met five days previous; this is Smooth Talk without recognition of consequences. It stars Lolita mega-tart Britney Spears in her first movie, and the first scene we share with her is in her bedroom as she jumps up and down on the mattress in teeny underwear, quickly followed by a shot of Ms. Spears in tiny pink Victoria's Secret attire hopping into bed with her dorky lab partner before reconsidering the big leap. We also get shots of Spears in a sleazy Louisiana nightclub, where she finally erases any line left between her act and a strip show, and after that a few weird angles of her posing on the hoods of cars and in motel rooms while clad in towels and bikinis. The only thing separating Crossroads from a Showtime soft porn (it has all the excrescent acting, bad soundtrack, and vaguely suggestive dialogue) is the lack of any actual nudity. Like its star, the film is just a highly inappropriate tease.

Lucy (Spears), who goes by "Loose," which seems just right, joins childhood pals Kit and Mimi (Zoe Saldana and Taryn Manning) on a trip across the United States to find Lucy's birth mom (Kim Cattrall), make Kit's audition with a record label, and expose Mimi's two-timing fiancé. Though they've grown apart since their halcyon childhood, in no time they have buried the hatchet and become hale old archetypal chums again (the whore, the virgin, the sassy black one). Their unexplained chauffer Ben (Anson Mount) is, the girls believe, a murderer and at least ten years older than either of them. A manic, sweaty Dan Aykroyd as Lucy's mechanic dad should be put into a pine box and out of our misery once and for all.

Clearly a showcase of Spears for Spears's legion of preteen girl fans (and dirty old men), Crossroads is a relentless exercise in extreme bad judgment. Rape, miscarriage, child abandonment, hitchhiking with killers, teen drinking, teen pregnancy, teen sex, *NSYNC sing-alongs, running away from home: all unpleasantries that litter Little Red Riding Hood's road to sexual maturity clutter Crossroads. I'm not suggesting that these aren't appropriate issues to address in coming-of-age films--far from it. But Crossroads treats its hot-button topics with crass slow-pans of nubile young bodies and a collection of giggly dumb-girl stereotypes the filmmakers try to bait-and-switch with two complete Spears performances (and one partial one). What's most inexcusable about this film is that it's geared to a young, fawning audience and going to be attended by a young, fawning audience yet still features a "funny" conversation about who's "touched it" and an utterly shameless resolution of two of its plotlines that is the nastiest moment in an already ugly film.

Crossroads is the very definition of irresponsible filmmaking: broaching difficult topics for the express purpose of offering a performer of already questionable talent the opportunity to decry her purity while grinding her crotch into the stripper's pole of dubious fame and outrageous fortune. It's a leering, lascivious, unforgivably misogynistic peep show presented by a woman director, a woman screenwriter, and a mostly female cast without any hint of irony or self-awareness. At its heart, the film is a greedy sinkhole of bad acting, bad plotting, and bad thinking--commerce as entertainment with the album tie-ins so numerous and bald that it ends with a music video and bonus track over the closing credits. One must wonder, though, what Ms. Spears was thinking when she agreed to star in Crossroads; I'll be surprised if there's a more repugnant movie all year. Time for a shower. Originally published: February 15, 2002.