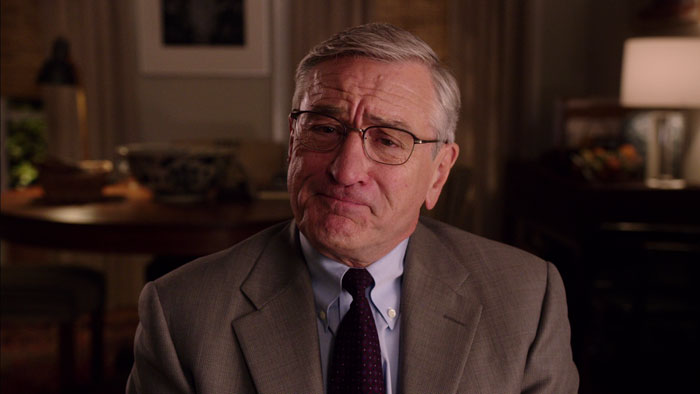 by Bill Chambers Back to back, literally, Robert De Niro made Mean Streets, The Godfather Part II, Taxi Driver, 1900, The Last Tycoon, New York, New York, The Deer Hunter, Raging Bull, True Confessions, The King of Comedy, and Once Upon a Time in America. Brazil, The Mission, Angel Heart, Midnight Run, Goodfellas, Cape Fear, This Boy's Life, Casino, and Heat punctuate his next ten years as a working actor. So I've never really felt the urge to bash De Niro for his late-period career choices, which are mostly about maintaining a standard of living, funding entrepreneurial bids, and mellowing with age. (This is not a man who owes us anything.) And his persona--whatever it is, can we agree that his most volatile roles inform it?--has not been so debauched by decades of ham that there's not a bit of a subversive kick to seeing him play Mary Poppins, complete with luggage though sans umbrella, in Nancy Meyers's The Intern.

Desperate for a reason to set his alarm clock again, De Niro's retired widower Ben joins the senior internship program at Brooklyn's About the Fit, an online clothing company founded and run by the enterprising Jules (Anne Hathaway, so uncannily embodying this BUZZFEED hatchet job that it almost seems like self-parody). The office takes an immediate shine to him, and he hits it off with the in-house masseuse (Rene Russo), yet Jules, to whom Ben is directly assigned, resents having to be responsible for another person in her already-overcrowded life. Nevertheless, Ben's forty years' experience in business and old-school values--he insists on wearing a suit and tie to a workplace where it is never not Casual Friday; he carries a hankie in case there's a nearby damsel in distress--make him a role model, if not a spirit guide, to even Jules eventually, and she comes to appreciate the calming influence of a man with nothing to lose. Ben also knows that if you're dropping a package off at Jay-Z's, you should at least put on a boyfriend shirt.

The Rosetta stone of Meyers's work is a PREMIERE MAGAZINE blurb from way back when she and then-husband Charles Shyer were still directing together. Meyers talks about how Shyer wants to upgrade to LaserDisc but fuhgeddaboudit because their cabinet has been custom-built around their current "tape system" and it's too expensive to consider replacing. Her worldview is like that cabinet: stiflingly luxurious and blinkered. The anti-About Schmidt, The Intern is the boomer daydream of a 66-year-old filmmaker, which definitely feels out of step with the times but maybe not as much as the movie's gender imbalances (this thing is a sausage-fest) and hopeless whiteness. Meyers tones down the lifestyle porn (although for me the film's biggest laugh was my mother walking in midway through and exclaiming, "Oh, I like that house!" at the screen), perhaps because there was nowhere to go after the feature-length ARCHITECTURAL DIGEST spread that is It's Complicated, but she's as solipsistic as ever. Look no farther than the moment where Jules and her icky husband Matt (Anders Holm) smilingly approve of their very young daughter, Paige (JoJo Kushner), calling another little girl "bipolar." Is it supposed to be witty? As delightful breakfast banter between people we're supposed to like, its casual offensiveness feels particularly thoughtless.

To Meyers's credit, no one else is writing roles this substantial for De Niro anymore or even thinking of him for parts like this--if indeed they ever were: His divisive comedy phase was always about playing to his tough-guy image, not against it. In an essay on their eight-film collaboration in the British periodical PROJECTIONS, Martin Scorsese says of De Niro, "I've been lucky over the years, because he isn't afraid to look unpleasant, to be mean, to be a person...nobody likes. We don't care. And yet what's interesting is that in reality he's a loving, compassionate person. And the audience somehow knows that." It's true that De Niro's antiheroes are curiously palatable, even relatable, but the flipside is that when he plays ultra-nice like this, he appears, through no fault of his own, to be repressing something malevolent, especially when Ben becomes Jules's chauffeur, i.e., taxi driver. Conceivably, the better version of The Intern reveals that this emperor has no clothes.

Still, like so many of Meyers's choices, De Niro's casting is unconventional and maybe wrong, but not 100% wrong. The Intern is notably light on dramatic conflict (few crises aren't resolved within moments of being introduced), but there's a compelling undercurrent of dread because Meyers's compass doesn't point exactly north. Some films have grace notes; this one has what might be more appropriately termed graceless notes, like Ben accidentally making Jules's assistant Becky (Christina Scherer) cry, then encouraging Becky's unfaithful ex (Adam DeVine, Holm's "Workaholics" co-star--I take it Meyers is a fan) to get in there and comfort her for the sake of getting her to take him back. The movie bangs on about chivalry and the decline of cool guys, with Jules waxing drunk about how equality initiatives like Take Your Daughter to Work Day have in fact left boys behind, resulting in a generation of man-children. It's a peculiar interlude, met with silence and followed by vomiting, and how to reconcile its implicit pedestalization of Ben with Ben's cowardly rejection of fellow middle-aged loner Patty (Linda Lavin)?

Though the response to Jules's soliloquy is a palpable "awkward!," there's a kernel of truth to it, but it's not what the world needs to hear right now, while women are still fighting to level the economic playing field. One wishes that Meyers, the rare A-list female director, were a little more possessed by the spirit of sisterhood. Another scene has a couple of mommy-blogger types throwing shade at Jules for having a life outside of motherhood, which isn't necessarily unrealistic but feels gratuitous all the same. Worse, it's Ben who puts these yentas in their place for being bad feminists rather than Jules (a third party pressuring them to revere Jules will only deepen the resentment, no?), and Ben who shames Jules into expressing her appreciation for the hard-working Becky, and Ben who, in an irony lost on them both, persuades Jules not to base personal choices on pleasing the men in her life. It's safe to say, five films into her solo career, that Meyers prefers the company of male characters, who, idealized though they tend to be, monopolize the attention of women, distracting them from each other. (The Holiday co-stars Kate Winslet and Cameron Diaz were separated by continents.) I used to believe that Meyers's What Women Want was a Tootsie riff on the importance of communication between the sexes, but now I think it could be a vicarious fantasy of going through life with the social cachet of a man and the perception of a woman that receives another expression here. It's a shame that Nancy Meyers is consistently the most complex female presence in Nancy Meyers movies. 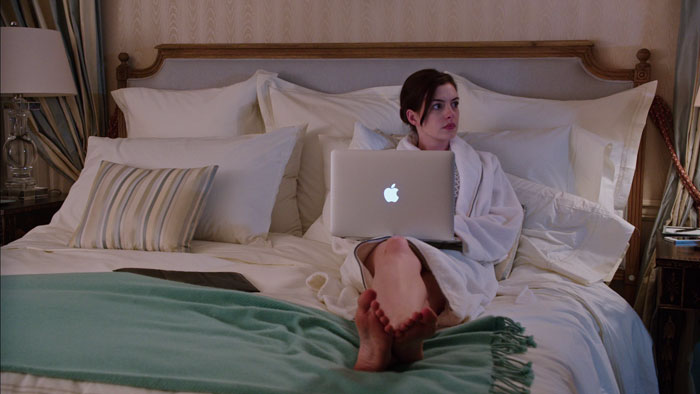 THE BLU-RAY DISC
Warner brings The Intern to Blu-ray in a 1.78:1, 1080p transfer that looks honey-dripped onto the screen. The glassy image is brighter and more dynamic than Meyers's last couple of features were (possibly the switch to digital cinematography from 35mm better suits her Pinterest aesthetic) and status quo for the format, down to the negligible traces of video noise. The attendant 5.1 DTS-HD MA track warmly reproduces a proto-comedy mix with a prioritized centre channel; don't expect fireworks, except when they break out the Busta Rhymes. A trio of HD featurettes begins with "Learning from Experience" (5 mins.), about the film's senior citizen/millennial dichotomy; continues with "Designs on Life" (6 mins.), about the great Kristi Zea's production design and Meyers's notoriety as a frustrated interior decorator; and concludes with "The Three Interns" (6 mins.), in which actors DeVine, Zach Pearlman, and Jason Orley--who was once Meyers's real-life intern--discuss the joys of working with De Niro. So many soundbites, so little substance, alas. Joining Pan's HiDef trailer, a standard-def preview for the upcoming Signature Edition of The Iron Giant cues up on startup of the disc, which comes with DVD and digital copies of The Intern. 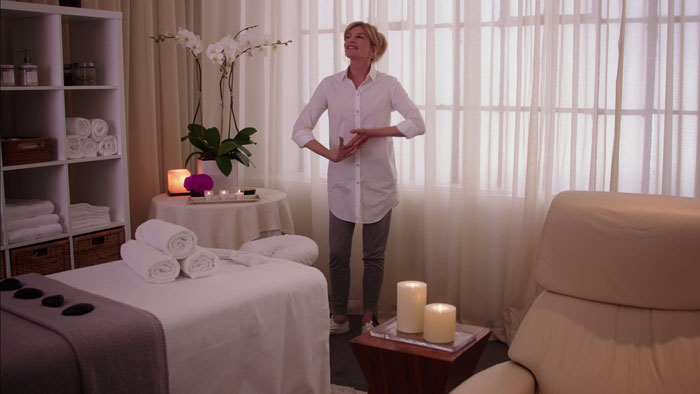