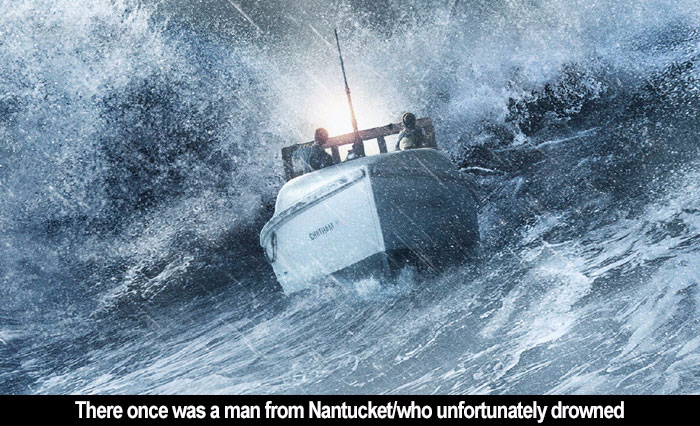 by Walter Chaw Craig Gillespie makes a play to be the new Ron Howard by not only following up Ron Howard's waterlogged maritime tale of dashing Captain Handsome and his feats of historical derring-do with his own, but also studiously crafting bland, empty, crowd-pleasing, middlebrow gruel for the sedate appreciation of people who are almost dead. Gillespie's is The Finest Hours, the tale of a heroic small-boat Coast Guard rescue in 1951 off the coast of Nantucket that sees four really boring white guys putting out during a storm to save thirty waterlogged oil-tanker guys. The Finest Hours never for a moment made me not think of that SNL sketch where Mark Wahlberg asks a goat if it's seen A Perfect Storm--which admittedly is not the worst thing that a film hasn't been able to make me not think about.

The movie starts with pathologically shy Coast Guard guy Bernie (Chris Pine) meeting man-eating harridan Miriam (Holliday Grainger) for a blind double-date. Cut to a few months later, when Miriam passive-aggressively bullies Bernie into getting engaged. Pine plays Bernie as probably autistic; Grainger plays Miriam as taking advantage of that. (It's like the sex scene in Forrest Gump.) Cut to the storm of the century and Bernie's clueless Coast Guard boss (Eric Bana) ordering Bernie out to certain death, because in movies about storms of the century it's very important to have a bad guy. Meanwhile, in the ocean, taciturn-engineer-no-one-listens-to-or-likes-but-will-eventually-respect-for-his-ingenuity-and-knowledge Sybert (Casey Affleck) calmly predicts that his big ship will break in half (it does) and then hatches a plan to ground said big ship on a shoal to buy time until Captain Handsome can find him. Which he will, since this is based on a true story and someone had to survive to tell the tale (which is the last line in Moby-Dick, what Ron Howard's water movie's true story was the inspiration for). It's all very heroic.

Bernie stands behind the wheel and gets wet. Giant CGI waves do their thing. Guys standing just off camera throw buckets of water on everyone. There's an old, crusty sailor on the big ship (Graham McTavish) who looks like a barnacle with eyes and a jolly cook (Abraham Benrubi) who fulfills a critical archetype in this type of movie. There's also a crazed bully on the big ship (Michael Raymond-James) who disagrees with everything Sybert says and is going to get them all killed, damnit! Because in a movie about a shipwreck during the storm of the century, it's very important to have two villains. (I've always wondered in films like this based stupidly on true stories what the families of the assholes think of the portrayal.) The tension is trifold: Will Bernie get to Sybert? Will Sybert keep from sinking before Bernie gets to him? And will Miriam bully everyone on shore and figure out that if all the power goes out in the town, the boys will need the townsfolks' headlight/heartlights to find their way back home?

Wags who say they don't make 'em like they used to, well, take the Olds out of the garage and point it at The Finest Hours. Later, push the beds together, because what could be more exciting than absolutely nothing challenging taking place? The film isn't terrible, but it is an affirmation of a worldview in which the only cause of art is to be completely inert. Bernie is a hero because he holds onto a wheel for two hours of screentime. Sybert is a hero because he's smarter than everyone else and a dick about it. Miriam is a hero because she's a woman who knows what she wants and is plucky, by George; why, did you know she asked Bernie to marry her? That's what you get for putting them in factories during the war, Roosevelt, you pinko. Hoping for pictures of the real-life folks during the end credits? Well, son, hold on to something, you're going to get that, too. The Finest Hours is not nostalgia and not propaganda--it's a soporific. A good one.