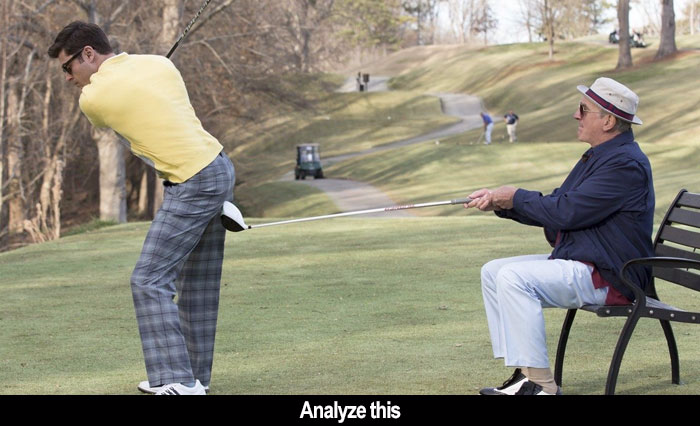 by Walter Chaw It's one of those boilerplates about an uptight guy on the eve of marrying a harridan taking a road trip with a free spirit to discover that maybe he doesn't want to spend the rest of his life (or the few years until he secures a divorce--the subtext of these things is always curiously traditional) selling out to The Man. Jason (Zac Efron) is that potential sell-out. You can tell because he dresses like the villain from an Eighties college sex comedy, is a corporate lawyer, and is engaged to a materialistic bimbo (Julianne Hough) who will justify his unconscionable hedonism by being a secret slut herself in his absence. The best of these films is its prototype, obviously (Capra's It Happened One Night), but the one I return to most often is Bronwen Hughes's curiously sticky--if only to me--Forces of Nature. The high concept this time around is that De Niro is the free-spirit road-tripper in a role that asks him to, literally at one point, be rapping grandmother Ellen Dow from The Wedding Singer. The imposition of this masterplot is really the only thing separating the film from "Jackass" spin-off Bad Grandpa, just as one word is the only thing separating the two concepts. De Niro's Dick (and you do indeed get to see his dick--though admittedly, it's probably a stunt dick) is a former Green Beret, by the way, which explains/doesn't explain why he gets a Presidio fight sequence against a bunch of black hoods who've been taunting a gay black guy Dick has also recently been taunting.

There are many ways you could go in attacking something like Dirty Grandpa. The easiest is to lament the fall of arguably the greatest actor from the greatest period in the history of film, to rend clothing and ululate about how De Niro has begun cashing checks in his dotage. It's tempting to use clever turns of phrase like "Aging Bull" as shorthand to avoid engaging with it. The hard way to approach Dirty Grandpa is to try to draw it into the larger conversation of what's happened to the state of our state when stuff like this is right there on the verge of being accepted as the new social lingua franca. It's the movie version of Donald Trump and Sarah Palin. There's no thesis, just provocation upon non sequitur provocation. (Actually, the other thing separating Dirty Grandpa from Bad Grandpa is that the latter offers variations on a theme--societal prejudices towards the elderly--and so its own disjointedness feels more purposeful.) Many describe their style of politicking as "impressionistic" (nonsystemic/subjective) and it is assuredly at least that, and Dirty Grandpa falls under that umbra as well--but it's more than that, isn't it? The image I get in my head is of a probe that hits the spot for which it's probing. Explanation, if you're willing to stretch, for why De Niro's titular grandpa habitually greets his grandson Jason with a thumb jammed up his ass. The hardest way to approach Dirty Grandpa, in other words, is by taking seriously this idea that De Niro's late career is not merely a diary of his eroding cognition, perhaps, but also as interesting a sociological document as his early work playing disaffected young men (Mean Streets, Taxi Driver, Raging Bull, et al) alienated by and in tension against the culture at large. When Jason recreates the finale of The Graduate, in a scene laced with hatred towards disability, endorsement of philandering, and a photo of a dog butt-fucking a former Disney child star, it is, as far as snapshots of the conversation in the United States circa 2016 go, not half bad.

Dirty Grandpa is the epitome of facile. If challenged, it'll fall back on the red meat; left unchallenged, it'll fester and spawn. It's like a facehugger in that way. The movie opens with Dick's wife dying, leaving Dick with this burning desire to fuck again before he himself dies. There's a cameo from Danny Glover that's very, very hard to take, as Glover is now sincerely too old for this shit. More difficult to take yet is the film's repeated insistence on doing the "I'm just kidding, I'm just kidding" reassurance that its extreme nihilism is supported by a heart of gold. It's the nadir of the Judd Apatow school of lacking the courage of its convictions. There's lots of leering, lots of Aubrey Plaza as a disgusting caricature who suddenly throws into harsh relief exactly how intelligent much of Amy Schumer's shtick is, and lots of stuff like how, after an all-night roofie and crack bender, all Jason wants is to be a photographer and hang out with his college hippie girlfriend (Zoey Deutch, somewhere between Isla Fisher and Anna Kendrick). How about how Dick likes to say things like "nigger" and "retard" but ultimately just wants to heal his relationship with his estranged son (Dermot Mulroney or Dylan McDermott) and help Jason be true to his inner granola/snag douchebag? Efron reminds me of Alain Delon circa Purple Noon, and I gotta say, I'd be pretty excited to see him as Ripley in another Highsmith adaptation. He has a blank, sociopathic quality that's to his credit rather than detriment. In Dirty Grandpa, on him, you can see reflected the serene incomprehension of all modern discourse. I don't even know at the end of the day if he's supposed to be Jewish or Catholic in this picture. It doesn't even matter.