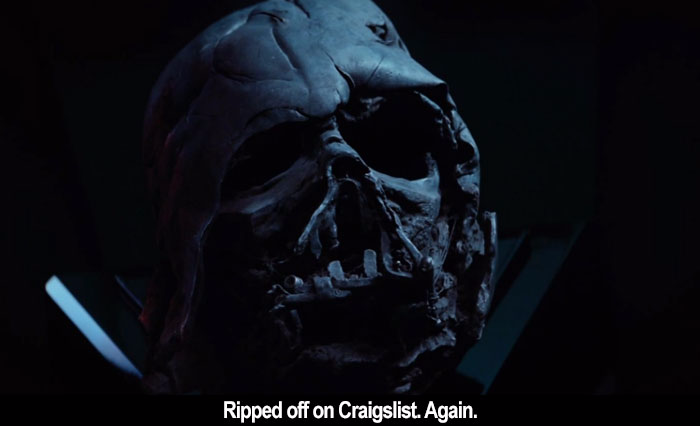 by Walter Chaw I was four when I saw Star Wars. It was the first time I'd seen a film in a theatre; it was the first film I'd seen, period. I didn't speak a word of English. It was overwhelming, and I'm discovering, after watching J.J. Abrams's Star Wars: The Force Awakens (hereafter Star Wars 7), that it imprinted itself on my DNA. Thirty-eight years later, I collect the toys my parents couldn't afford to buy me when I was a kid--the ones I played with at friends' houses, when I pretended to be Luke Skywalker (Mark Hamill) as a child of immigrants doing his best to fit into a society that promised blond and blue-eyed messiahs. My office is full of these toys. They are fetishized relics for me. I hold them and they possess a totemic value. The curve of a molded plastic stormtrooper's helmet reminds me of the department store where I looked at it through the packaging--and of my delight at my mom one day buying me one, which I opened on the way home in the backseat of the family car.

The first film is subtitled "A New Hope." It's representative of George Lucas's clumsy way with language (that didn't matter so much to a four-year-old, non-English speaker) and his sometimes-embarrassing penchant for broad, maudlin juvenilia (foibles that found their full flower in the justly-maligned prequel trilogy and, ultimately, in every other post-THX-1138/American Graffiti Lucas- scripted/directed product), but the idea of hope is a compelling one in diving deep into what it is, exactly, that made Star Wars--a film guilty of every lethal, critical Harlan Ellison/JG Ballard barb thrown at it--a cultural phenomenon, something that could bind itself to a child's DNA. Star Wars, in the simplicity of its archetype and the obscurity of its universe, promised that while the world may be mysterious, the individual's place in it was secure. It is the triumph of mythology to contextualize the un-contextualizable, and Lucas, with his liberal cribbing of Kurosawa and Joseph Campbell, tapped into a desire to be special and good and brave.

It's why I don't really care for the Star Wars universe and its spin-offs but do care a great deal for the central trinity of heroes and their family saga. As a child, they represented to me the possibilities for acceptance, of course, but also for love and confidence and ability. They solved problems. When Luke confronts the idea that his father is his enemy and that he is doomed to become him unless he can somehow accept him, it's a thunderbolt as true and clear as any Jungian/Freudian missive can be clear. It's not complicated, but Luke's refusal at the end to murder his own shadow is underestimated as a watermark in the panoply of generally vengeful, bellicose popular entertainments. What Disney movie, for instance, ends with the embrace of the villain at something other than the tip of a righteous sword? No matter the degree that Lucas's blinkered populism cripples Return of the Jedi, what remains is this guide to better living. Hard work is good. Courage in the face of entropy is good. Loyalty to your friends is good. Fear is bad. So is self-interest. This basic codification of rules resonating as it does is, after all, only what good cults do: provide a template, easy to follow, of commandments. May the Force be with you.

I cried for a full hour of Star Wars 7. I expected to get a little misty; I didn't expect wracking, body-shaking sobs. The film made me feel like I felt when I was four, sitting between my parents, watching Star Wars as light show and kabuki and passion play. I've read that you don't remember emotions or pain, just the intensity of them; and indeed, I didn't know that I had any fragment left of that four-year-old in me, anywhere. James Ellroy, in his memoir My Dark Places, talks about investigating his mother's murder and opening a bag that held the dress she wore that day and remembering her smell. It's a grim analogy, but Star Wars 7 provoked in me a sense memory. I had a physical reaction to Luke's lightsaber lighting and recognized--subconsciously, I realized in retrospect--that Abrams used the same sound effect the original trilogy had for it. It happened to me with Bryan Singer's use of elided dialogue clips Brando recorded for the Donner Superman films, too--explanation in part for why Superman Returns remains my favourite of those. I had a physical response to the Millennium Falcon in flight, to the graphics of the targeting computers, to glimpses of secondary characters like Nien Nunb in the background of certain scenes. Even the moment where a creature raises its head out of desert sands to regard a droid, lost, rolling by. Abrams doesn't always hit the notes, but he hears the music.

In this chapter, thirty years have passed since the events of Return of the Jedi. The opening scroll informs us that Luke has vanished and that a rebellion, still outnumbered and fugitive, is desperate to bring him back into the fold. As the film unspools, we learn that Luke had an apprentice, Kylo Ren (Adam Driver), he was incapable of saving from the Dark Side, and of how that failure drove Luke into exile. There's a massacre in Star Wars 7, seen in disorienting, vivid flashback, just as there's the loss of literally billions of lives in another hallmark of a franchise that continues to boast the highest body count of any film series in history. And there's a new hero, Rey (Daisy Ridley), who constitutes the first time that an American film has deciphered the riddle that Japanese anime has solved for decades: how to create a resourceful, non-sexualized heroine every bit the equal of the men around her without sacrificing either her gender (Linda Hamilton in Terminator 2) or humanity (Sigourney Weaver, eventually, in the Alien saga). Rey is iconic. She's a scavenger on the junk planet of Jakku, living in the shell of an AT-AT half-buried in the dunes. The opening hour establishes Rey as the hero of the piece, and though there are echoes everywhere, she's a singular creation and the single best thing that's happened in cinema in 2015. She is the United States finally moving into the 21st century. Let's see if it lasts.

Into Rey's life comes Finn (John Boyega), a stormtrooper brainwashed poorly, finding himself incapable of participating in slaughter and genocide at the behest of Kylo Ren and breaking out Rebel fighter pilot Poe (Oscar Isaac) as a means to his defection. Finn and Rey are tasked with returning a droid, BB-8 (not insipid in the slightest), to General Leia Organa (Carrie Fisher)--reversing the role of the original trilogy's R2-D2 droid and his own function as message-bearer. I take care to offer an anthropomorphic pronoun to the robots here because Abrams understands, as we all understood once upon a time, that the mechanical beings in this world are feeling creatures. When protocol droid C-3PO (Anthony Daniels), late in the game, slaps his counterpart, there is an appropriate moment of registered shock from BB-8. Abrams is evolving his characters. It's subtle. Like when smuggler Han Solo (Harrison Ford) takes a long, long look at Rey out the corner of his eye when she demonstrates a savant's command of technology. I love the scene where she asks Finn for various tools so that she can save their lives, as well as the one in which she wants to know why he keeps grabbing her hand when they're running from danger. Of all the times I was emotional because I was transported, I was emotional because Abrams's film has invested in this hero and heroine honestly, forcefully. There's a scene, too, where another father confronts another son and other paths are taken.

Star Wars 7 is a flawed film. In a way, it's very much like another sixth sequel this year that I love unconditionally, Creed. Poe isn't well-developed and his storyline seems like an afterthought--especially when so much care has gone into Rey's and Ren's arcs. The whole thing gives off the sensation of a pageant at times, checking off landmarks on the way to reintroducing these characters and this setting. It all suggests an extended set-up for Rian Johnson's Star Wars 8, positioned to be the best film of this new trilogy just as the Kershner/Kasdan The Empire Strikes Back was the best film of the original trilogy because it was likewise free from having to dress the stage. Yes, yes, yes--all the criticisms are valid. But I love this movie. I love that it has the feeling of a ragged apology to the fan in me who had wanted more and got three films of ugly, detached imagery, appalling writing and performances (as a result of that writing), and 1940s attitudes towards race that handily, instantly alienated the child of immigrants once offered hope at the same hand. I don't pretend that I deserved an apology--George Lucas has made it clear repeatedly and constantly that I don't and I accept that--but I'm grateful for it just the same. When a squadron of X-Wings flies in low over a lake to save our heroes from overwhelming odds...yeah, man. I love that the movie's heroes are a young woman and a young black man, and that they're played by real actors with a real script that cares about them. I love that the villain is a Freudian mess. And I love that I again felt, truly felt, that excitement and wonder I experienced 38 years ago, because Star Wars 7, at its best, is the scent of my mother's perfume, carried all the way from 1977, inexplicably, to lay me flat when I least expected that anything could.