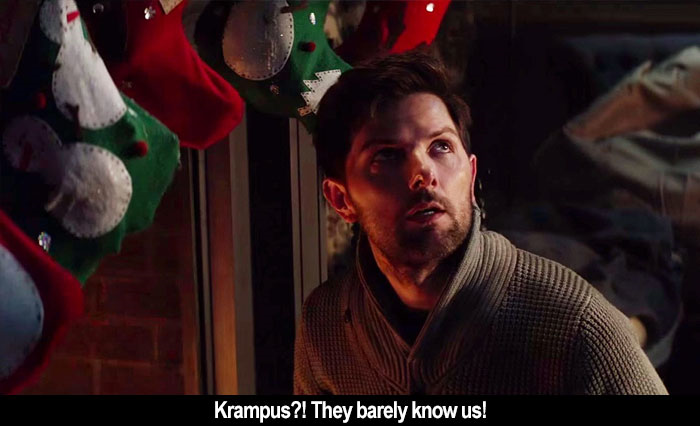 by Walter Chaw I used to have a collection of short stories edited by Isaac Asimov, The Twelve Frights of Christmas. Ramsey Campbell's "The Chimney" is anthologized therein, and though it's not directly a Krampus story, it's sort of a Krampus story and was, at least, the first time I'd been introduced to the concept of something like an anti-Santa. It's a great story. Michael Dougherty's Krampus is not great, but with all the lulls and jokes misfiring, it does give you plenty of time to think about other things. (I didn't like his Trick 'r Treat either.) What works about the film are its first twenty minutes or so, where Dougherty seems to be setting up an unpleasant, nasty little commentary on the commodification of Christmas. There's trouble, though, when the parts of your movie that work are the parts that compare best to Jingle All the Way. I'll say, too, that there's genuine delight in the appearance of weird snowmen on the lawn during a blizzard blackout, stranding a shitty family alone with their thoughts while a German alpine demon lurks about outside--as well as hope, however self-deluding and fleet, that Dougherty's going to pay off the early abduction of the second-most sympathetic child of six. Alas, it's ultimately as compromised as Trick 'r Treat. The last five minutes are a masterpiece of playing both sides against the middle and pandering to an intended middlebrow audience. Like its PG-13 rating, Krampus is a devil's bargain between horror film and family film. It's the kind of thing that only really worked when it was Gremlins.

Sarah (Toni Collette) and Tom (Adam Scott) are liberal, upper-middle class Brooks Brothers/Martha Stewart suburbanites with two adorable, bickering kids, Beth (Stephanie LaVie Owen) and Max (Emjay Anthony), who have all of them forgotten the true meaning of Christmas. This causes Tom's Old World mater Omi (Krista Sandler) to purse her little-old-lady lips and look on pensively. When Sarah's redneck sister Linda (Alison Tolman) visits with her Uncle Eddie family--husband Howie (David Koechner), horrible tween girls (Lolo Owen, Queenie Samuel), Bad Santa mutant (Maverick Flack), and baby, plus ugly-talking, trashy Aunt Dorothy (Conchata Ferrell)--familial tensions erupt along with an ominous, electricity-killing blizzard. The first twenty minutes are fun, familiar, Christmas Vacation fare--the old class boilerplate and all that jazz, with the one kid just wanting everyone to get along. And for a good long while, Krampus teases with the prospect that it'll be true to its nihilism. I loved the stalking and abduction/murder of Beth, for instance, with a shadowy bogey leaping from rooftop to rooftop in pursuit of her. Later, when the house is under siege by the baddie, summoned by the family's essential horribleness during the most wonderful time of the year, Krampus sports a few nice practical effects and some CGI gingerbread guys. It's a little like Dr. Giggles: It threatens to be awesomely, ridiculously nasty. Enough to save the film? Mileage will vary.

Personally, I spent too much time not trusting that Krampus would play by the rules. Its ending is more "Twilight Zone" than The Mist, and that's a pity. Koechner is the MVP here--actually, the entire cast is more than game and everyone takes it seriously, but there's a lot of drag. The downtime until the evil starts is stale and the evil is PG-13. It's not all that funny, not all that scary, not paced that well, and I was left thinking that Goosebumps had already done some of this, more effectively. What's missing at heart is more creativity in a screenplay that suggests an endless amount of things, what with the snowmen who appear after every disappearance in the film, or the symbols etched into the masks of the wicked elves--there's untapped lore beyond an old lady telling an admittedly wonderfully-animated old wives' tale to a literally captive audience. There's stuff in here about the right-wing/left-wing chasm in the United States that doesn't get paid off apart from the strange moment where hillbilly Howie mumbles apologies for thinking his brother-in-law was an ineffectual dick (and all the other moments where the liberals prove themselves adept with firearms). There's stuff in here, most provocatively, about the lengths to which consumers will go to save five bucks on a piece of branded plastic. What there isn't is more than facile glances off of each, a few tame action scenes, and then an ending that implies a kind of, what? Purgatory? Krampus is a pretty meat sack without a skeleton. Everything it wants to do has been done already and better. Maybe I don't like family films.