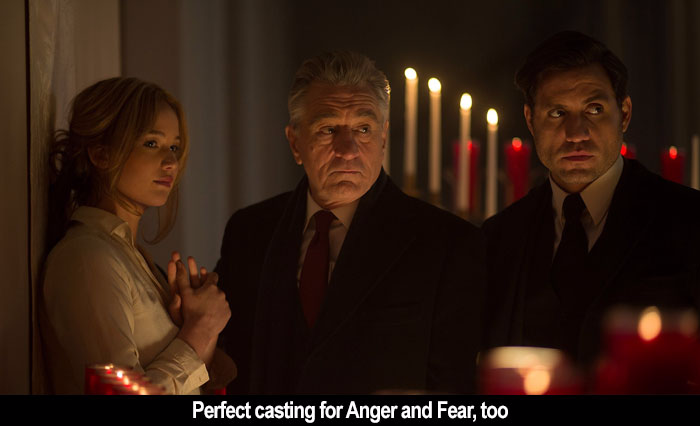 by Walter Chaw After demonstrating with his last few movies that he's not Martin Scorsese, David O. Russell has decided to kill two birds with one stone by demonstrating that he is neither Wes nor P.T. Anderson, either. In Joy, he proves that marrying Wes Anderson's whimsical solipsism with P.T. Anderson's Pynchon-esque biographical sketches is an amazingly stupid thing to do--one of those science experiments in '50s B-movies that everyone knows is a bad idea except for the idiot doing the splicing. Yes, Joy is that bad. When it's not being unbearably twee, it's perving on Jennifer Lawrence like von Sternberg on Dietrich. But Joy ain't no Blue Angel, and while I like Lawrence fine, I guess, Russell is sure as hell no von Sternberg. What I'm saying is that Russell is a terrible, glitchy director with a thing for Lawrence that he manifests by shooting her walking towards the camera with sunglasses, without sunglasses, with a wig and without a wig, in slow-motion or at normal speed, in daytime, nighttime; he lights her with the sun, with spots, with discretes, from below, and especially from behind--all in a kind of PENTHOUSE glamour. The only part of Joy that isn't unwatchable is a sequence shot precisely like identical sequences in P.T. Anderson's Magnolia, where an obviously tense Bradley Cooper, playing QVC programming director Neil Walker, shows the titular domestic goddess Joy (Lawrence) around the studio. I take it back, those were pretty bad, too. The only thing preventing Joy from being the worst movie of the year is that Pixels happened.

Joy lives in a shithole with her crazy, bedridden mother (Virginia Madsen), two adorable moppets who serve no function, and an ex-husband (Edgar Ramirez) who still lives in the basement. When a pipe breaks, it's Joy to the rescue. When her father Rudy (Robert De Niro) gets a divorce and moves back in, she helps him get settled. When her harridan sister betrays her...you know. And on and on. Joy finally grows tired of struggling, and one day, she cuts her hands while squeezing out a mop-head full of broken glass, giving her the idea to invent a mop that wrings itself. She hits up Rudy's new squeeze, Trudy (RUDY TRUDY RUDY TRUDY--Isabella Rossellini), for a big loan, contracts out an extruder to make mop parts, and takes her spunk and can-do attitude to the fine folks at QVC. There, she turns on her blue-collar charm and sells a bajillion units. Later, she sits in a giant office like the one Daniel Plainview sits in at the end of There Will Be Blood (directed by P.T. Anderson) and bestows her magnificent beneficence on the great unwashed. There's also the part where her useless mother falls in love with a Haitian plumber (Jimmy John-Louis) who teaches her Haitian, sort of, while they walk around together holding teacups. This is something Wes Anderson would do. See how this is working out?

Joy is the kind of based-on-a-true-story idea that starts with a "dedicated to strong women" inscription and ends with the realization that Joy isn't strong, she's an idiot enabler who nurses vipers, stumbles onto a fortune despite this, and comes out smelling like a Jersey flower. It's all so Grapes of Wrath, with Lawrence thrust into the Rose of Sharon role, complete with Steinbeck's repeated references to her stoic self-containment and impenetrable smile. When she sits upon a throne of purity, surrounded by her inconstant retinue of parasites and assorted hangers-on, her saintliness is indeed immaculate. If the film ran a little longer, I'm sure we'd see her pull the next naïf, yearning to live free in a capitalist utopia, to her full and milk-down breast. I get it, you like Jennifer Lawrence. She's an agreeable presence. I think that her coronation, like Rooney Mara's, is premature by a genuinely great movie or two. The hidden message of Joy is that money cures all. It cures having a shitty family--not by making them less shitty, but by making them tolerable because you can buy a big enough house to oubliette them into a separate wing. It cures your lack of romance in your life because you can turn your ex-husband into a servant. It cures your lack of screenplay and obvious deficiencies as a director, too, apparently, by allowing you to keep making these annual jerk flicks for the approval of prestige audiences. It's like if Vertigo were a crowd-pleaser that won awards. And shitty.