Apples vs. Oranges: On the Burt Reynolds and Frank Langella Memoirs 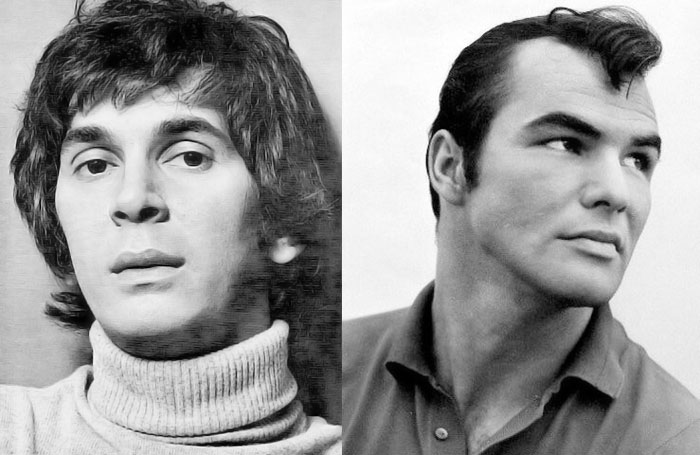 BUT ENOUGH ABOUT ME: A MEMOIR
FFC rating: 6/10
by Burt Reynolds and Jon Winokur

DROPPED NAMES: FAMOUS MEN AND WOMEN AS I KNEW THEM
FFC rating: 10/10
by Frank Langella

by Bill Chambers Burt Reynolds and Frank Langella are very different actors (Burt could not have pulled off Dracula, nor would Langella have ever looked at home behind the wheel of a Trans-Am) and, as it happens, very different writers, yet in 2015's But Enough About Me: A Memoir and 2012's Dropped Names: Famous Men and Women As I Knew Them, respectively, they've taken a similar approach to memoir by reminiscing about, in Langella's words, "the transient company of many remarkable people." Langella sticks to the rich and famous while Reynolds broadens his repertoire to encompass his father, various civilian friends, and a horse, but a more significant distinction is that, with one exception, everyone Langella writes about is dead, whereas quite a few of Burt's players are still alive. It sometimes makes But Enough About Me read like an open letter--one with decidedly Nixonian overtones in a passage listing every person who stood by Reynolds when it was rumoured he had AIDS. (If you're not on it, fuck you is the subtext.) If Langella is by definition the more vulturous of the pair, he's also the superior anthropologist, a keener observer, and, comparatively-speaking, a born humorist, vividly caricaturing his subjects so that even the most reviled of them (Anthony Quinn, Lee Strasberg) will seem worthy of the contempt. Here's how Langella introduces his chapter on Strasberg:

"Of all the short men I've known, the guru of the Actors Studio, Lee Strasberg[,] stood tallest on the list of the arrogant and insufferable. Even climbing as he did onto a self-constructed pedestal, he seemed still, in my estimation, to rise only to the height of a pompous pygmy."

Compare this to Reynolds's description of director John G. Avildsen: "John Avildsen was a polarizing director. No, that's too wishy-washy: He was an arrogant prick and the biggest asshole I ever had the misfortune to work with." In the same number of sentences, Langella captures the essence of Strasberg and his disdain for him, while Reynolds just drops a #truthbomb. Crossover between the books is illuminating when it happens.* Both men eulogize Elia Kazan, for example, and come to the same conclusion: that he was a vampire--"a serial fucker of women's bodies and men's minds," as Langella puts it. Skeptical of Kazan's powers of seduction, Reynolds is stunned to find himself telling Kazan his life story within moments of meeting him. But he's content to accept the encounter at face value, as though a magician got one over on him--unlike Langella, who probes his own immunity to Kazan's Svengali-like powers and actually summons a bit of gratitude for the man's gifts, both those he bestowed and those he possessed. By contrast, Reynolds is so incurious that he admits he still doesn't know why Kazan's nickname was "Gadge," which is immanently Google-able. In fairness, Langella's exposure to Kazan was more prolonged, but in the case of Bette Davis, where the reverse is true (Davis and Reynolds were implicitly lifelong friends, while Langella merely crossed paths with her in a hotel lobby years after they had struck up a brief phone friendship), the woman Langella remembers seems infinitely more complex. Reynolds quotes Davis as saying "Well, the cunt died today!" when Joan Crawford passed away, but only Langella evokes the venom behind those words.

Reynolds isn't overly interested in ruffling feathers--"You'll find mostly love letters here," his Author's Note apprises--and that's okay, but too many entries devolve into generic biography and secondhand anecdotes. (But Enough About Me's Wikipedia digressions suggest that co-writer Jon Winokur was occasionally left to his own devices.) Sometimes, he gets sidetracked altogether: The chapter on Spencer Tracy is something of a Trojan horse for a lengthy reproach of actor Darren McGavin, Burt's "Riverboat" co-star, although Reynolds idolizes Tracy and invokes his name throughout the book. A frustrated football player and daredevil, Reynolds is strongest writing about athletes and legendary stuntman turned director Hal Needham, his most frequent collaborator, whose reputation as the toughest of the tough so preceded him that he couldn't walk into a bar without being challenged to a fight. Indeed, a true raconteur emerges when Burt remembers escorting Needham to the hospital for a broken back and the unfortunate consequences of a doctor's attempt to quite literally pierce Needham's armour.

No less enjoyable are form-busting accounts of working on Deliverance and Boogie Nights, the latter of which brings out Reynolds's prudish side. I wish he hadn't compared the opening tracking shot of Boogie Nights to Citizen Kane, because he obviously meant Touch of Evil and two writers didn't catch it; it calls all of his factual statements into question. As for Deliverance, the one of his movies he would put in a time capsule, Burt holds his decision to pose nude for COSMOPOLITAN around the time of its release accountable for the film's Oscar fizzle, and although he prides himself on a self-deprecating sense of humour (dubiously, I hasten to add--a single barb from Mel Brooks sends Reynolds reeling), he more or less regrets becoming a laughingstock with this beefcake spread, having felt its reverberations on the rest of his career. I do doubt Reynolds's oft-repeated claims of humility--time and again, he gives himself the good lines and pats himself on the back a bit too strenuously for not having a racist, misogynistic, or homophobic streak--but he's reasonably accountable for his mistakes, including turning down Terms of Endearment to do Stroker Ace.

Langella is two years younger than Reynolds but comes across as older, wiser, more secure. When Yul Brynner shows off the strobe lights inside his limo that were installed "in case blacks attack my car," Langella's disgust is tacit in the inclusion of the anecdote--he doesn't have Burt's compulsive need to reassure readers of his own enlightenment whenever such dinosaurs rear their head. Of course, Langella isn't a celebrity being paraphrased by a ghost scribe (one doesn't know what to make of Reynolds's youthful aspirations to become the next Salinger), nor is he putting on a "Regrets? I've had a few" cabaret like Reynolds has. If anything he's doing a picaresque--the roughly chronological arc of Dropped Names (chapters are ordered according to the subjects' demise, but Langella didn't always know them at the end of their life) charts Langella's coming-of-age among the elite--and his writing talent fortunately matches his ambition. He's practically an Algonquin wit:

On Raul Julia:
"In this era when young male stars seem a sexless set of store-bought muscles set below interchangeable screw-top heads with faces of epic blandness--sheep trying to look like bulls--Raul defined real masculinity."

On Geena Davis (a rare tangent into the living, precipitated by his memories of Oliver Reed on Cutthroat Island):
"Perhaps in a long laundry list of ludicrous events I have witnessed on film sets, the one I most treasure is watching my leading lady having her makeup and hair assiduously attended to between each take of one scene. Not unusual, certainly for lovely actresses, but mindboggling when you consider the fact that she was going to be completely off camera."

On Paul Newman:
"You knew you were with a deeply feeling man, a decent man and a man of principle, but like the statue of David, there he stood, physically perfect but emotionally vacant."

On Richard Burton:
"By the time the bottle was near empty, so was my brain. The sonorous voice, now slurring its words, had succeeded in numbing and stunning me. Could anyone, I wondered, be so unaware of what a crashing bore he had become?"

As Langella warns in his introduction, "Don't turn the page if you like your stories spoon-fed or sugar-spread." Still, I think the UK's DAILY MAIL calling him "the bitchiest man in Hollywood" in their review of Dropped Names is a tad reductive. He's catty, I guess, but his zingers are pointed rather than vicious and can be unbearably poignant, for instance the way he remembers actor Cameron Mitchell "covering his sad decline with an over-the-top wisecracking demeanour; its most heartbreaking manifestation its constancy." ("It was as if he dare not sit silent for a moment lest he face the depths to which he had descended." The depths in this case an episode of "Swiss Family Robinson": for Langella a way station on his way up; for Mitchell the opposite.) If the book's only intention is to tear down some sacred cows, it fails miserably, as Langella's piercing emotional intelligence ends up humanizing them more often than not. Not just an actor's curse, that insight, I suspect, is also the product of the soul-searching forced on Langella by his unreadiness for a number of the relationships recalled in this memoir. An air of elegy settles over everything--how could it not, given that this is, in essence, a collection of obituaries?--that Langella embraces in affecting accounts of damaged friendships with damaged people (Jackie O., Anne Bancroft), though he writes with the same tender nuance about bonds broken by the march of time, saying of "best boyfriend" Raul Julia, "He was a man who loved life, work, family, and friends. And to be one of them was a joy that, in remembrance, makes me wish I did believe in angels." It's Burt's bad fortune to have to follow that.

*I'd be remiss if I didn't mention that Langella dated Dinah Shore shortly after Reynolds broke up with her. Being several years his senior is what ended her relationship with Burt, who wanted children; but her age was catnip to Langella, whose lusty paeans to older, in some cases elderly, women in Dropped Names are among its idiosyncratic highlights. return