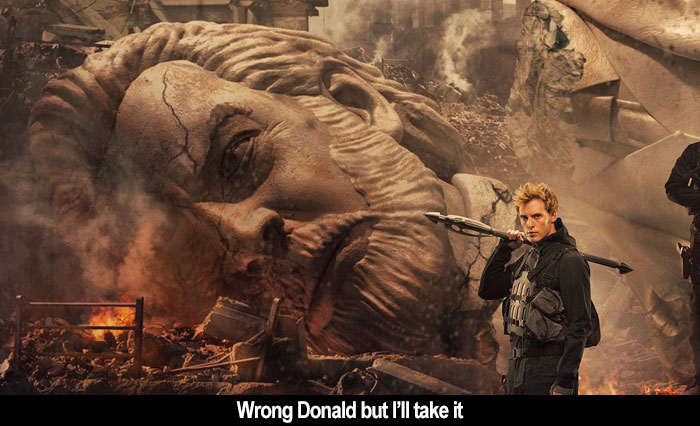 by Walter Chaw The first four hours of The Hunger Games: Mockingjay - Part 2 (hereafter Hunger Games 3.2) are interminable. Because I barely remember anything from any other movie in this series (I had to go back and reread my reviews, not just to refresh my memory, but to affirm that I'd even seen the previous films), everything that wraps up loose threads, the two (count 'em) times characters are forced to give Biblical genealogies to the probable delight of ardent fans, the deadening nonsense involving love triangles, all that jazz, is exactly like watching paint dry. It's bookkeeping. They could just be moving their lips and making smacking noises. I like how the late Philip Seymour Hoffman handles these scenes: chin to the chest, looking for all the world like he's counting minutes. It's not unlike that part of The Sound and the Fury (which is my favourite book, by the way, so I'm not really complaining) that most people skim. And for good reason. Moby Dick has one, too. I'm saying this in the vain hope that you lay off in the comments section. Oh, I also still hate the silly Dickensian names. They're stupid and desperate.

What's not stupid is the last hour of the film, which begins somewhere during the trip our band of heroes takes to the suddenly-abandoned Capital. Let's say it starts when all the black oil comes gushing into the city centre and one of the "good guys," Peeta (Josh Hutcherson), wigs out and murders a peer, leading to a genuinely graphic, disquieting moment where the corpse is suspended in midair, dripping, desecrated. Not glossing over its significance, director Francis Lawrence (whose Constantine is a disaster that ages well) has heroine Katniss (Jennifer Lawrence) linger over this tableau on her way out. It's important, because it marks the moment the movie--the franchise--betrays the covenant it has with its audience that everything will be all right. What's interesting to me is that everything turns out to be all right, but not without meaningful, sometimes horrific sacrifice. The last lines of the film (badly overwritten--the whole thing needed another pass through a typewriter) convey the idea that the survivors will never be emotionally well again. You could even make something of one of the traps being oil if you so desired. Tempting. In fact, the last hour of Hunger Games 3.2 is good enough that deeper readings of this text would actually hold water in a way that previous attempts to politicize it have failed.

The heroes go from the failure in the square to the realization that their "deaths" have instantly been seized by both sides--that of "evil" president Snow (Donald Sutherland) and "good" rebel leader Coin (Julianne Moore)--for the purposes of their respective spin. It leads to talk of suicide and to a subterranean sequence that reminds a great deal of the final escape in Aliens, ending in a death of a beloved character that's frankly difficult to take--even for someone like me, who has no other relationship to said character except the dim memory that he got married at some point in the first, already-blurry portion of this instalment. This occasions a set-piece in another city centre where refugees are used as pawns in the escalation of a conflict; the sudden de-escalation is a result of their sacrifice. The picture questions whether there are actually good sides in war and does a remarkable job tallying the dreadful civilian toll when the power-mad make their ideological grabs. Hunger Games 3.2 is topical. Sober, too. If most of it is self-serious and dour, this last chunk takes responsibility for the bloodshed and makes the case that peace is only won at great cost: Those who win it are always stained by the atrocities committed in its name.

I didn't expect to like Hunger Games 3.2. Why start now, after all. And more than half of it is truly dreadful. The things that are wrong with it are the things that are wrong with all of these movies. The performances are good, that's hard to argue--except to say that, given the material, the better adjective would be "heroic" or "long-suffering." But the payoff is extraordinary. The last hour of this film is as good as the first Harry Potter and the Deathly Hallows: a war idyll in which the young protagonists we've followed to this point are confronted with their mortality, with the litter of friends who've died because of the decisions made on their behalf, with the idea that things might not work out after all. Hunger Games 3.2 somehow has its cake and eats it, too. Consider a moment where Katniss lies, motionless, on the ground and on fire, a lovely closure to images from earlier in the series (I bet) and her title of "girl on fire." It's not about redemption, it's about living with ghosts. (It's like the also-underestimated/misunderstood Spectre in that way.) It says something about who we are at this moment in our history that our most expensive, most-consumed product is talking about the terrible things we've done and how although we'll never be OK, that doesn't mean we don't have to keep on living. I'm all the more excited for The Force Awakens now.