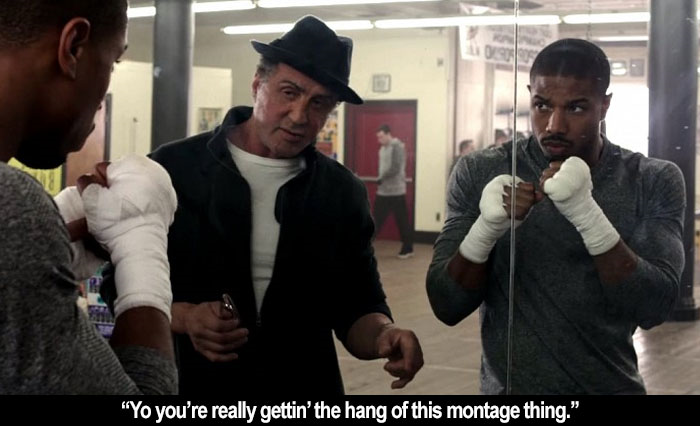 by Walter Chaw I love this movie. I do. It's not perfect. The love interest is underbaked and the fight choreography of the final match is unfortunately disjointed. But I love this movie--unconditionally, I guess. The story goes that Ryan Coogler, the young director of Fruitvale Station, pitched Sylvester Stallone on the idea of rebooting Rocky with Apollo Creed's son. (Something the Indiana Jones series needs to do with a grown-up Short Round, by the way.) The auto-critical analysis of the film is that it's essentially a father/son intrigue, which lends some insight into the Rocky/Mickey relationship of the original Rockys, and there are enough references to same to gratify the cultists. What I liked most about Stallone's willingness to take a shot on a fresh idea from a minority perspective--this is the first instalment of one of his two venerable franchises to not spring from a Stallone-written script--is that it feeds into the idea of Stallone as an auteur maybe, a canny cultural anthropologist definitely. Every Rocky, every Rambo, is distinctly a product of its time. I don't feel qualified to talk about this, but to the extent that I understand the theory, I'm sold.

Adonis (Alex Henderson) is the product of an Apollo Creed infidelity. As the movie opens, he's a kid lost in the system, getting into scuffles, when Apollo's widow, Mary Anne (Phylicia Rashad), tracks him down and provides for him an education and a home. We meet Adonis again as a young man (Michael B. Jordan), doing the Fight Club two-step as white-collar worker by day, Tijuana prize-brawler by night. He quits his job. Decides he needs a trainer. Goes down to Adrian's Restaurant and finds the best.

The first time I saw Rocky, I was nine. I've seen each of the sequels multiple times. Rewatching the first film recently, I was struck by the simplicity and honesty of Stallone's performance. Rocky's a simple guy. He gets confused. He tries to help the neighbourhood pump by telling her how guys are and gets an earful of derision as a consequence. He's incredibly gentle with the painfully shy Adrian. He understands his best friend's fits of temper and deep feelings of inadequacy. I used to be scandalized by the fact that Rocky beat Taxi Driver for Best Picture that year, or at least I pretended to be. There's a part of me that believes the films to be equal in many ways--identical in many ways, even: the loner who crafts a hero mythology for himself; the commentary about how the media aids in that process of creation. After forty years, the Rocky character is as much foundational bedrock for us as any actual historical figure. Rocky is essentially good. He reflects, as a nation, who we hope we are. No accident that we often see him wrapped in Old Glory.

The brilliance of Creed is that it reconfigures the Rocky mythology around a young black man dealing with his own feelings of inadequacy and fears of abandonment. It's a deeply political work and it doesn't deal with politics at all. Adonis meets a girl, Bianca (Tessa Thompson), who, like Rocky's Adrian, is flawed. Bianca's losing her hearing, but she's a musician. It's the only part of the film that exceeds the corn threshold, but Thompson and Jordan's scenes together are so electric it doesn't seem to matter much. Their first date, at a Philly landmark cheesesteak joint, is an easy medium two-shot. They're absolutely comfortable with one another. They speak in a vernacular that I don't know but understood. It's simple. It's lovely. Later, when Rocky does an obvious thing on the eve of the Big Fight involving Bianca, well, it's silly, and I think Bianca's behaviour prior to it is maybe unforgivable and clearly a fairly clumsy plot device. But, you know, it's simple, and it's lovely. Creed is medicine for melancholy, a sop against cynicism. Coogler does a training montage without apology, and when Stallone steps in next to Jordan on the speed bag, I cried without apology.

Adonis's first fight against a seeded opponent is beautifully shot in a single, floating take by the great Maryse Alberti. The camera looms inside the ring, darting around the fighters. It compares to the early fights in Raging Bull, where Michael Chapman's camera lurks like an animal. I do wish Coogler had filmed all of the fights like this, or comparably. It builds Adonis's character, and it locates Rocky in the corner in an aspect that's as iconic in its way as Indy framed against a mushroom cloud. Midway through Creed, Rocky, who's been grappling with age, receives a bad diagnosis and refuses to fight it. In a speech to Adonis, he talks about how everything in his life has passed him by, leaving him there by himself and that's all right, but he doesn't have any reason to stay. It's an extraordinary monologue, extraordinarily delivered. Stallone deserves an Oscar for it--and for a subsequent training montage that deals with Rocky's cancer, leading, in the end, to another trip up those art-museum steps that is just...you know...simple. And lovely. I love this movie.