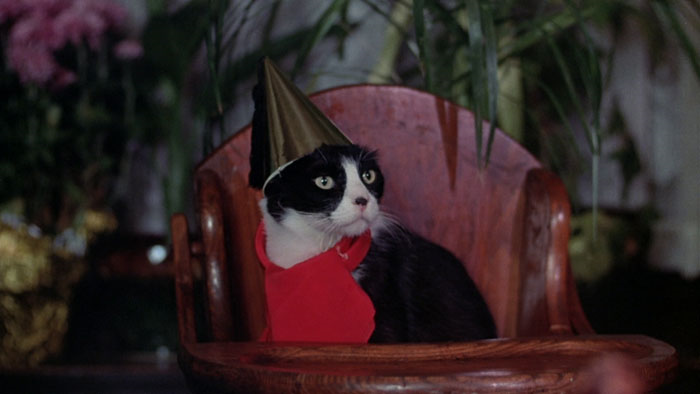 *½/**** Image B+ Sound B+ Extras B+
starring Chris Sarandon, Cristina Raines, Martin Balsam, John Carradine
screenplay by Michael Winner and Jeffrey Konvitz, based on the novel by Konvitz
directed by Michael Winner

by Bryant Frazer Death Wish director Michael Winner tried his hand at a boilerplate horror flick with The Sentinel, another in the long-running cycle of American horror films that doubled as scary religious propaganda, with the faith of Catholic priests the last bulwark against harrowing incursions by Satan himself on our mortal realm. It's not a good movie, but it has a hell of a supporting cast--Christopher Walken, Eli Wallach, and Ava Gardner, just for starters--and that specific, vaguely gritty time-and-place authenticity that you could only get by shooting on location in New York City in the 1970s. For this type of genre piece, that ensures a small kind of immortality, but Winner, indifferently adapting a best-selling novel and barely directing a lead actress who hates him, brings to it a certain je ne sais quoi that pushes it over the line into the sleazeball hall of fame.

The protagonist is Alison Parker (Cristina Raines), a magazine cover girl looking for an affordable pad in New York City. Thanks to an ace real estate agent (Gardner), she ends up in an awesome Brooklyn brownstone. Never mind that weird figure staring out the top-floor window all day and night, she's told--he's just an old, blind priest. Things would be looking up if it weren't for her shady lawyer boyfriend (an utterly flat Chris Sarandon) and ongoing bouts of anxiety related to the abusive, carousing father (Fred Stuthman) who drove her to the brink of suicide, which cause her to faint dead away at inopportune times. It gets worse as she becomes acquainted with her pushy, borderline grotesque neighbours, such as genial Mr. Chazen (Burgess Meredith), who won't leave her alone; the Clotkin sisters (Jane Hoffman and Elaine Shore), who "carry things a little bit too far;" dotty old Mrs. Clark (Kate Harrington) from 4A; and a black-and-white cat named Jezebel with a thing for songbirds. Then there's that guy pacing back and forth in the room upstairs in the middle of the night, making banging noises. Maybe she should head up there in a thin negligee hanging off one shoulder and investigate...

Sure, it sounds pretty good--an old dark house story for the Exorcist generation. But the results on screen are pedestrian. While most of the cast does what it can (Wallach and Walken as police detectives, John Carradine in blind-priest get-up, Arthur Kennedy as a monsignor who knows the Church's secrets), by multiple eyewitness accounts, and on the evidence of the often-stiff, disconnected performances, Winner was barely directing the film at all. That left the actors to puzzle out their character motivations with the help of novelist Jeffrey Konvitz, who was on set as a producer, or to hit their marks with advice from veteran NY-based DP Dick Kratina, who previously shot The Super Cops and The Happy Hooker. Maybe over the course of making movies with people like Oliver Reed and Marlon Brando, Winner simply forgot what was required to direct mere mortals. Raines is no Oliver Reed, and she struggles to hold The Sentinel together.

Still, if you dig the kind of silly supernatural yarn that has busybodies running around asking college professors to translate spooky Latin passages that end up being excerpts from Paradise Lost, The Sentinel may scratch that itch. 1970s nostalgists will get a kick out of the assembled big-name actors (in addition to those already mentioned, in small roles are Sylvia Miles, Jose Ferrer, Jerry Orbach, Jeff Goldblum, Martin Balsam, Nana Visitor, Tom Berenger, and even Richard freaking Dreyfuss in a blink-and-you'll-miss-it walk-on). And Winner does manage to commit a few memorable moments to celluloid. In one spooky scene that elicits genuine chills, Alison confronts a ghost from her past, with violent results. In another famous tableau, Alison is left alone with lesbian neighbour Sandra (Beverly D'Angelo), who suddenly sticks a hand underneath her red leotard and starts masturbating (as lesbians are wont to do). Rather than expressing surprise or, you know, getting up and leaving, Alison just fidgets and glances around the room like she's waiting for a bus. Thanks to some truly flat-footed editing, the scene is hilarious, but unintentionally so.

Elsewhere, Winner is content to go for the gross-out. Notoriously, as the picture's climax demands a vision of Hell on Earth, he trots out for display a small army of what he would later describe as "the most amazingly deformed people" the production could find. Winner's cynicism in putting them forward as visions of evil incarnate is breathtaking. No one working in the 1970s was more eager to excite the moviegoing public's lizard brain than Winner, and it remains impressive in a way that as late as 1977 he was able to indulge in such purely exploitative flourishes under the aegis of a major Hollywood studio.

Then again, Winner surely wasn't hired for his good taste. Though Philip Rosenberg's production design is more than handsome and Kratina knows how to light a haunted house, Winner's compositions are uniformly bland. He blocks shots like he's making a TV movie, and the action is just about 100% confined to the TV-safe area of the widescreen frame. It's tempting to say there's nothing personally expressive in this film, which is basically a work for hire, but Winner's presence underscores some unsavoury undertones. The story's basic template and commercial springboard was clearly Rosemary's Baby. Like it, The Sentinel is about a young woman living in a New York City apartment building among eccentric neighbours with nefarious intentions. Yet in important ways, it's an inversion. Where Rosemary was a repressed, subservient housewife, Alison is a modern woman who explicitly resists settling down and marrying. When bad things happen to Rosemary, it's because she is too passive a figure in her own life and too trusting of authority figures--but when bad things happen to Alison, it's the opposite: They happen because she's a lapsed Catholic and a sinner, and her troubles really begin when she insists on living alone. So The Sentinel introduces us to a woman who prizes her independence, then spends its duration putting her in her place. Good vs. evil hocus-pocus aside, it's a genuinely mean-spirited diversion--one of those horror movies that gives horror movies a bad reputation. 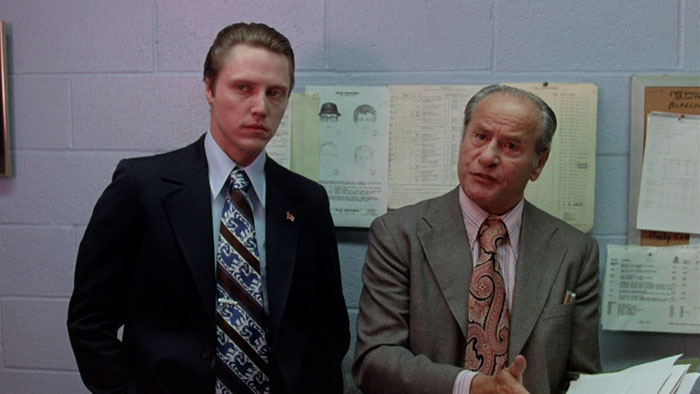 THE BLU-RAY DISC
The Sentinel arrives on Blu-ray Disc from Shout Factory in reasonably good form. The transfer is not quite immaculate, showing some signs of physical damage to the source, but overall it looks like a solid, period-accurate rendering with appropriately-saturated colours, a reasonably high-contrast image, and a visible layer of film grain. Probably mainly for dust-busting purposes, a bit too much noise reduction has been applied, softening the grain and, especially during the opening and end credits, eliminating fine detail from the background of the picture. Shadow detail is strong as far as it goes; many shots are quite dark but blacks do not look crushed. Flesh tones occasionally tend to the pink, but colours lean mainly into the blue once the spooky stuff really starts. Curiously, the feature was encoded to use only about 20.3 GB of space at a relatively low bitrate hovering around 22 Mbps, despite the pressed disc being a capacious dual-layer BD, leaving plenty of unused space that could have been employed to reduce the compression ratio and maybe eke out a little more picture quality. Although the box claims a 1.85:1 aspect ratio, the feature has in fact been opened up to the HD-native 1.77:1 (16x9). DTS-HD MA 2.0 encoding is adequate to deliver a standard-issue 1970s-era monaural soundtrack. There's not much noise or hiss, but there's not much oomph, either, and the mix is sometimes a little muddy.

Bonus features are led by "Working with Winner: The Making of The Sentinel", a new 24-minute, HD video interview with 2nd Assistant Director Ralph S. Singleton. Singleton discusses his early career before moving on to the topic of The Sentinel itself. He talks about the film's Brooklyn Heights brownstone, a practical location both inside and out, and reveals a neat trick for shooting the building's day-for-night interiors. He remembers the movie's casting director, Sylvia Fay, flying to Florida to troll carnival freak-show tents looking for Winner's demon extras. He also defends his old boss, brushing aside complaints about the politics of Death Wish and reflecting on Winner's preternatural ability to attract a celebrity cast--though he does allow that "Michael was difficult to work with" and admits that Winner's career decisions by the time of The Sentinel were based entirely on their commercial prospects.

Meatier are the three (3!) audio commentary tracks, which provide disparate perspectives on the production. First up is Jeffrey Konvitz, the author of the original novel from which The Sentinel was adapted, interviewed by Nathaniel Thompson of MONDO DIGITAL. That doesn't sound especially promising as a movie-related extra, but Konvitz actually had a producer credit on the film, and he seems to have taken his role quite seriously, spending a lot of time on the set and commiserating with the actors over Winner's apparent lack of interest in performance. "Cristina was not very happy with Mr. Winner," he says. "She was really upset because he comes on the set, hasn't said a word to us, sets up his camera and says, 'Actors: act!' That's the way he does it."

Commentary #2 brings the man himself to the fore, recycling the late Michael Winner's own yakker from a 2008 DVD release. Winner blabs non-stop with all the tact and self-awareness of Donald Trump, touching on subjects that include his adaptation of Konvitz's novel ("He was an ex-lawyer; lawyers, you know, are dodgy people"), his lead actress ("Oh, look--she's taking her top off but making bloody sure we don't see her bosoms") and actor ("He wasn't bad, he just wasn't a man who could hold a film"), and the costumes ("Considering this was made in 1976, I don't think the clothes are out of date at all!"). He does get quite bored with the film, drifting off into telling stories about Rock Hudson, Daniel Day-Lewis, and Barbra Streisand, describing his recipe for scrambled eggs, and dispensing advice to young actresses. He recounts a story that also appears in his autobiography, about a miniature revolt on the part of union members who apparently demanded a separate dining space so the crew didn't have to eat with Winner's deformed extras. Winner claims to have found their objections shameful, and promised to express his solidarity by eating with the extras instead of with the rest of the crew. As it turns out, Winner continued eating lunch where he always did: in a private, air-conditioned room inside the house. Well, at least he admits it.

Cristina Raines gets to weigh in on the third track, this one moderated by blogger Shaun Chang, who originally interviewed Raines last year at his blog HILL PLACE. Surprisingly, Raines identifies herself as "a contract player" at the time--apparently Universal was the last studio to abandon the old contract system--and says the part was essentially a command performance. Told Kate Jackson had turned down the film, Raines says, "I wish she had taken the role!" Asked how she would characterize her work with Winner, she responds: "Unpleasant." She has fonder memories of Konvitz, and offers her charitable impressions of each of her co-stars in turn over the movie's running time. She doesn't have a lot to say--and she seems to have blocked out big chunks of the experience--but it's an interesting conversation, largely because her candour is bracing. 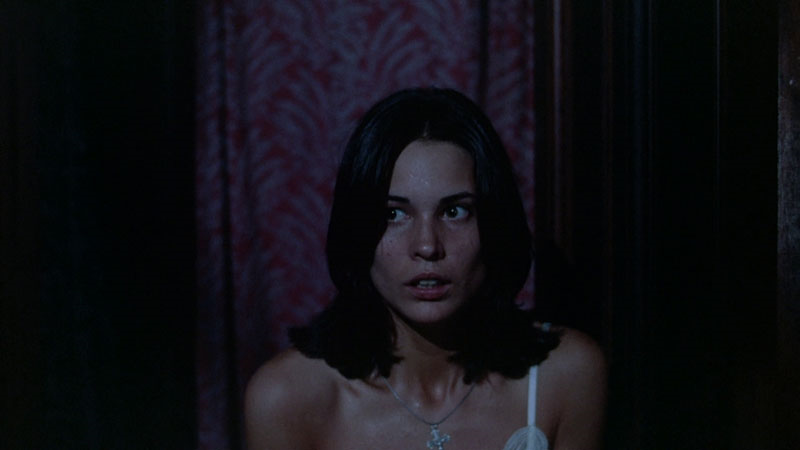