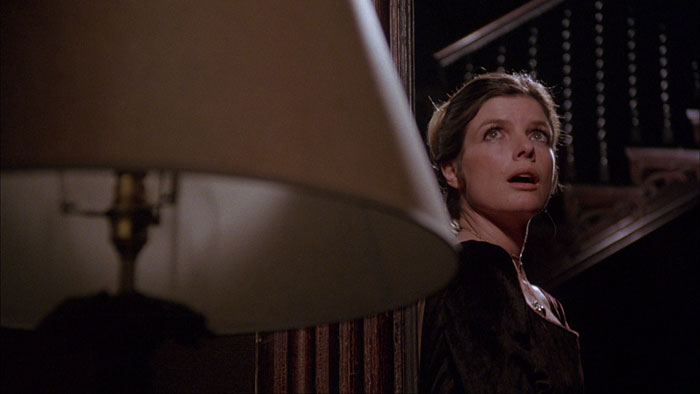 by Bryant Frazer One in a spate of post-The Exorcist, post-Rosemary's Baby potboilers about ordinary people confronting ancient evil in the modern world, The Legacy has an enduring reputation as a big slice of horror cheese and not much else. Certainly, it's derivative--just another old-dark-house yarn set in the English countryside, spiced up in '70s fashion with a sinister, Satanic backstory that never quite clicks together. It's one of the last horror movies to come out in the handsomely-mounted classic style favoured by Hammer before contemporary slashers and body-horror changed the game completely in the 1980s, but what it lacks in originality and coherence it makes up for in comfy genre atmosphere. Co-scriptor Jimmy Sangster was one of the top dogs at Hammer Film Productions (his writing credits include Horror of Dracula and The Curse of Frankenstein) and Welsh director Richard Marquand was a BBC documentarian making his fiction debut (he would go on to direct Return of the Jedi). That's not a world-beating combination, but if you like your occult thrillers played straight, The Legacy's workmanlike style is an asset.

Katharine Ross and Sam Elliott play Margaret and Pete, a couple of Angeleno interior designers who get a $50,000 advance on a mysterious job offer from a client in London. Pete is skeptical but Maggie wants to get out of the city. Because Pete dotes on her, they make the trip. A near-miss accident on an afternoon ride in the English countryside puts Pete's motorbike in the shop; the Rolls Royce that ran them off the road is owned by Jason Mountolive (John Standing), a wealthy chap who invites them to his mansion for tea while they wait. Once there, they find themselves lodging in isolation among a sampling of European aristocracy assembled at the property for reasons unknown. The situation grows awkward as the houseguests start dropping dead, one by one.

Marquand's direction can be bland, with some awkward blocking as the actors move into place in the frame, though he does makes some nice shots. His great subject is faces seen in close-up and medium close-up, but his compositions get fairly compelling when the camera is pulled back, giving him some space to fill with interesting bits of dressing (set director Bryan Graves had worked on Polanski's Macbeth) or out-of-focus figures lurking in the background. Cinematographer Dick Bush, a veteran of latter-day Hammer pictures (Twins of Evil, Dracula A.D. 1972) and their imitators (Tigon Studios' Blood on Satan's Claw) set the moody tone for the piece before quitting the film partway through; Alan Hume, best known in the UK for his prodigious work on the British Carry On movies (from here he jumped aboard the James Bond franchise, shooting Roger Moore's last three outings), took over. And it couldn't have hurt to have had Oscar-winning editor Anne V. Coates stitching the pieces together. (Of note to historians: on Scream Factory's new Blu-ray Disc, she says she also directed the film's second unit, including many of the shots involving vehicles.)

The years haven't exactly been kind to The Legacy, which strives a little too hard for its Biblical subtext. Still, it has its moments. There is a genuinely shiver-inducing scene set in a makeshift hospital room upstairs, where Mountolive suddenly appears much the worse for wear. (Attentive viewers will note that the Mound of Olives has a special significance in Sunday School stories.) Another memorable scene involves an emergency tracheotomy, elegantly shot without much fuss but bloody and highly effective. I even like the high silliness of a sequence demanding that our heroes become horse thieves in a bid to escape the property. And if you want to see vintage Sam Elliott nude (from behind), this may be your best chance. But it doesn't all work. A scene where Pete attempts to revive drowned houseguest Maria (Marianne Broome) is played for suspense, complete with handheld camera and blaring danger music, as if the audience weren't well aware that the poor woman had already been pickling at the bottom of the pool for several minutes. Likewise, a scene where the couple attempts to leave the estate in a stolen car goes on forever, long after it's established that they can only drive in circles. Perhaps this particular genre trope played better and was worth lingering on back in the 1970s. If so, it has aged poorly.

The performances, however, are timeless. The supporting players don't have a whole lot to do, but they are fun to watch. I especially liked Charles Gray, whose line readings as a cigarette-puffing Nazi war hero are both unimpeachably deadpan and terrifically sinister, and Roger Daltrey as a loose-lipped music-industry mogul who volunteers to Maggie that black magic is "just another way of life"--and further notes, "We don't ride around on broomsticks or anything"--before being shushed for good. Meanwhile, Margaret Tyzack does fine work as a nurse who seems unlikely to be familiar with the Florence Nightingale Pledge. What's more, I became a big fan of Maggie and Pete, playing a couple who are completely at ease with one another, whether it's Maggie gently prodding Pete as he admires Maria in her swimsuit ("Just browsing," he says), or Pete gently expressing his disbelief over Maggie's suspicion that she's the reincarnation of an ancestor who was burned as a witch. (Elliott and Ross became a real-life couple hereafter, eventually tying the knot in 1984.)

Surprisingly, Pete is the buzzkill in the relationship, continually urging the more open-minded and adventure-seeking Maggie to exercise caution. (He calls her Slim, which I choose to take as a sly reference to Howard Hawks's second wife, Nancy "Slim" Keith.) While I don't want to get into spoiler territory, Pete's reaction to the big twist at the end of the film is priceless. His needs are completely subordinated to Maggie's, and Elliott manages that feat without giving up his manly 'stache or cowboy demeanour. As a matter of fact, Pete has all the best lines. Yet in its willingness to let the woman choose her own destiny, amid and over the objections of the man in her life, The Legacy neatly reverses prevailing gender roles. In its way, it's a great example of how even middle-of-the-road horror movies from the '70s were willing to engage with and embrace feminist principles. At the same time, it turns out to be a fond study of marriage and unconditional love. That's worth a lot. 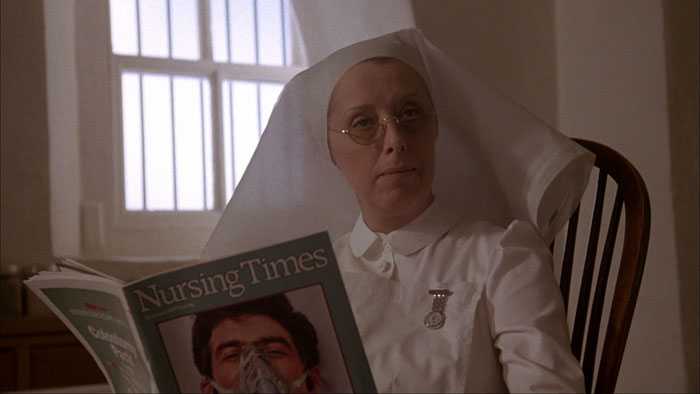 THE BLU-RAY DISC
The Legacy receives the Blu-ray treatment in a modest package that squeezes the whole 100-minute feature into just over 17.3 GB on a single-layer disc, translating to a video bitrate of about 22 Mbps. That's a practical move that keeps costs down, and it doesn't seem to have had a too-deleterious effect on image quality. Scream Factory bills this as an "all-new HD transfer" from the film's interpositive, and the colours are generally appealing, especially when it comes to preserving the variegated browns that dominate the Mountolive mansion. However, skin tones are a little variable, sometimes leaning into the pink. Contrast and shadow detail are strong, especially in interiors, which sometimes tend to darkness despite no evidence of crushed blacks in the transfer. (Editor Coates has something to say about that; see below.) Exteriors are comparatively flat, in keeping, perhaps, with the generally overcast English skies. Digital denoising and dust-busting have likely contributed to the somewhat mushy grain texture. The aspect ratio is identified on the package as being 1.85:1, but it's actually an HD-native 1.77:1 (i.e., 16:9).

In an even more unfortunate error, the box describes the sound as monaural DTS-HD MA, when in fact it is a 2.0 rendering of the picture's surround soundtrack, an early Dolby Stereo effort by the legendary Bill Rowe. He was the first mixer in the world to use Dolby noise reduction on a film (A Clockwork Orange), and went on to mix such Dolby landmarks as Tommy, Lisztomania, and Alien. Though The Legacy's mix won't knock anyone's socks off these days (it's much less directional than the 7.1 norm), it demonstrates effective sound-mixing principles that are still in use today. Mostly, the track benefits from the clear placement of dialogue in the centre channel, but Michael J. Lewis's score gets a nice boost from Rowe's liberal use of the surrounds (this may be a good or bad thing, depending on how you feel about Lewis's adventure-film approach). Elsewhere, the mix does strive to put the viewer in the action--an early scene with Sam Elliott taking an overly-hot shower uses rear-channel effects to enhance the first-person POV, and a later action scene that takes place outside of the house gains tension from directional sound work after Lewis's score drops away entirely. A faithful multichannel remix built from the original audio stems would be a big improvement but, let's face it, nobody is going to go there for The Legacy.

Quality, not quantity, is the key to the disc's extras, which feature a pair of excellent storytellers. In the 14-minute "Anne V. Coates: An Editing Legacy", the highly-regarded cutter discusses her career in general before focusing on The Legacy, a job she took in part because it kept her close to home and her three children. She notes that she approached the film as a thriller rather than as a horror movie. In addition to the bit about directing second unit, she reveals that the cinematographer--presumably referring to Bush--and production designer Disley Jones fought on set, with the DP playing his trump card: he reduced the background lighting. (One wonders if this had anything to do with Bush's departure.)

In the 11-minute "The Make-Up Effects of The Legacy: with Robin Grantham", the make-up artist talks about the history of his profession in British cinema as a way of recounting his early career and his big break on The People That Time Forgot. He makes a point of mentioning the importance of a make-up artist's relationship with the cinematographer, who can offer a heads-up if a shot is going to be a close-up that requires extra attention. And of course he discusses the F/X set-ups for the film's tracheotomy, a death scene involving a shotgun, the creation of a gruesome half-mask with a false eye, the use of roast pork for a character's charred remains, and what sounds like a grisly effect involving shards of glass hitting a woman's face that didn't make the final cut.

Unfortunately for The Legacy fans, circumstances leave the special features necessarily scanty. Marquand, Hume, and Bush are all dead, and although Katharine Ross and Sam Elliott were approached by the label, they declined to participate here. The rest is colour by numbers: a trailer, a TV spot, and a radio ad, plus an image gallery in an overdesigned new format with a distracting motion effect applied that scales each one up in size by about a third before dissolving to the next. I'm hoping Scream's future releases dial back this zoom effect in the slideshow, but this one's well worth a look if only for its inclusion of an amazing Polish poster for the film. Finally, the reversible cover sleeve lets you select your floating-cat's-head key art with or without flanking Ross and Elliott faces. 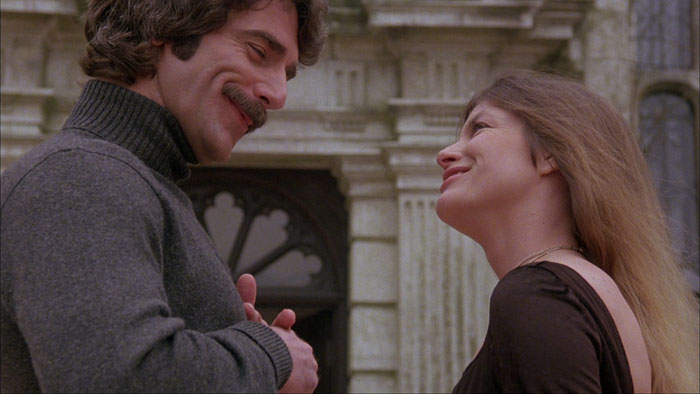