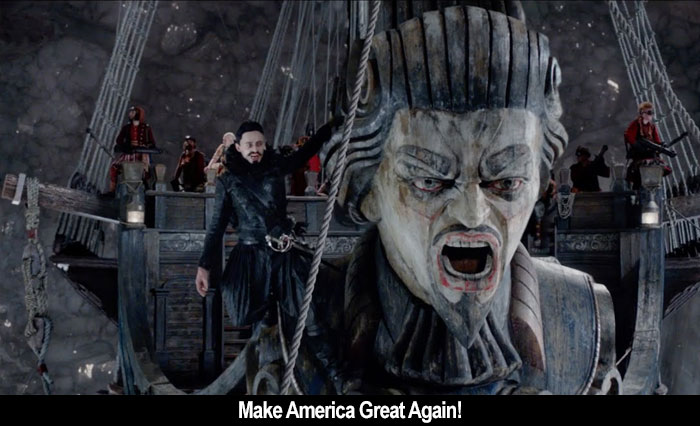 by Walter Chaw Paired with Hanna, his take on the Little Red Riding Hood story, Joe Wright's Pan suggests that the director's closest career analogue is that of J.J. Abrams. Wright's askew take on Anna Karenina hints at a sympathetic penchant for ebullient reinterpretation--no less so his adaptations of Atonement (by an author essentially making a career of taking a piss) and Pride & Prejudice, which, in its sparseness and emotional economy, could stand alongside Andrea Arnold's magnificent Wuthering Heights. Hanna, his best film, achieves at least a portion of its greatness through its bull-headed perversity. No premise is too fanciful to be presented seriously by Wright. In Pan, when we're introduced to the pirate Blackbeard (Hugh Jackman), a Fury Road's collection of orphan miners sing-chants "Smells Like Teen Spirit" in obeisance to their monstrous overlord. It's something born of Brian Helgeland's anachronistic A Knight's Tale and of Terry Gilliam in its antic set design and costuming and of David Lynch, even, in a sequence where Blackbeard dons a mask aboard his flying ship to breathe deep something that resembles the Spice. There's another sequence in which a pirate ship, a 16th-century galleon, engages in midair with a trio of British Hawker Hurricanes (I think) defending Mother England against the German blitz before breaking through the clouds for a brief, weightless moment.

It's high fantasy, in other words, as orphan Peter (Levi Miller, up to the challenge) discovers that he's The One after being kidnapped by Blackbeard to work in the pixie-dust mines of Neverland. He's not just Neo, he's also Oedipus, the fulfiller of a prophecy to return to murder his "father" (Blackbeard, ostensibly) after a time in exile. Jackman is exceptional in his interrogation of Peter. For all the praise (some of it ironic, I have to believe) Eddie Redmayne's bee-stung performance in Jupiter Rising has received, here's the real villain performance of the year. Jackman plays it absolutely straight and in that there's a delightful, surprising weight to his relationship with Peter, augmented just right by an animated flashback to a fight with Peter's lost mother (Amanda Seyfried). It's in the mines (the dust keeps Blackbeard young, eternally--a Lady Bathory notion that tickles) that Peter meets Hook (Garrett Hedlund), who, at this moment in his career, is sort of a swashbuckler in the Indiana Jones mold. He even loses his hat in one telling moment near the end, once he's finished playing out the motions of another Harrison Ford icon, Han Solo.

There's a hopeless squareness to Pan that could be distracting. None of its jokes land. The tone of it is too peculiar and attempts to lighten it through dialogue are doomed and awkward. Better is the film's visual humour: Tiger Lilly (Rooney Mara) peering through slats in a freshly-bisected board; Blackbeard birthing himself through a diaphanous screen meant to evoke the Peter Pan story's shadow plays; a demonic nun, Mother Barnabas (Kathy Burke), all of bestial movement and appetite and grunt and growl. Pan can be read as a death dream where children killed by a German bomb--shown in loving Pearl Harbor high-to-low tracking shot--enact a fantasy of salvation at the moment of their expiration. (The picture's early scenes in the orphanage are not unlike Guillermo Del Toro's The Devil's Backbone.) It can be read as a critique of the Industrial Revolution in Blackbeard's destruction of the "Lake District," or a similar critique of Imperialism and crimes against native cultures--though that one tends towards an ugly paternalism. It is, in any analysis, a visually-striking phantasmagoria that doesn't shirk from a sense of danger in the occasional murder or noble sacrifice. Pan is the movie Hook should have been: frightening, weird, packed with psychosexual disturbance and a payload of pregnant subtext. It does it all, too, without a surplus of ugliness. It reminds me most of Sylvain Chomet's The Triplets of Belleville. It's great.