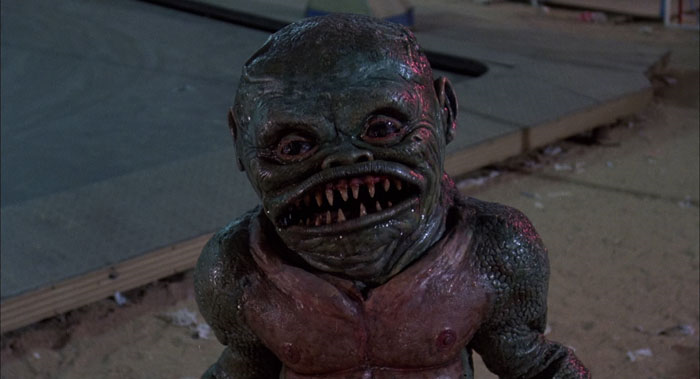 by Jefferson Robbins Not rip-off, not homage, but something in the water. Luca Bercovici's 1985 Ghoulies, from the lo-fi film factory of Charles Band, felt on release like a ploy to frack cash out of Joe Dante's Gremlins from the year before. In fact it had a parallel development, launching pre-production in 1983 under the working title Beasties and formally premiering in Britain in November of 1984. It also boasts a far weirder strain of presentation than Dante's peak, something Lynchian that goes beyond the mere presence of Jack Nance. It has its passel of '80s "teen" types harassed by horrors, sure: the stoner(s), the ladykiller, the nerd--not to mention their attendant ladies, none of whom are given much personality, resulting in a deeply uninteresting film debut for young Mariska Hargitay. But their mannerisms in large part are so outré and alienating, it's at times like watching an underfinanced dinner-theatre preview of 1986's Blue Velvet. And then the dead warlock bursts out of the ground to be attended by a clutch of grody puppets.

Jonathan Graves (Peter Liapis, an adept proto-Nathan Fillion) inherits the mansion where, in his infancy, his father Malcolm (Michael des Barres) sought to murder him as part of a black magic ritual. Saved and reared in ignorance of his background by groundskeeper Wolfgang (Nance), Jonathan falls into his father's old habits, including the ones involving enchanted circles and rune-trimmed robes. He also reawakens the titular troll-things, small gibbering homunculi who served Malcolm but apparently dissolved into their constituent elements upon his death. Little suspecting he's a cat's-paw for his disembodied evil dad, Jonathan coerces his girlfriend Rebecca (Lisa Pelikan) and their friends into a ritual that will let Malcolm roam the earth again. As soon as Michael des Barres returns to the screen, the ham is truly out of the can.

It's of a piece with Band's later direct-to-video hits Puppetmaster and Demonic Toys. As in those landmarks, there's a malevolent wizard pulling strings to threaten full-grown adults with an assortment of wee, improbable creatures. (Dollman and Parasite take a similar approach, but from a science-fiction perspective.) The hand-crafted, hand-manipulated Ghoulies are outstanding--expressive and "lifelike," if that term can be applied--courtesy of designer John Carl Beuchler. The toilet-dwelling munchkin from the poster isn't even the most convincing of the group; that honour goes to the little furry guy with the big sloppy mouth and wide green eyes that roll back in his head when he gets excited. (Good as Beuchler's work is, though, one can't help but what-if over the knowledge that Stan Winston was initially slated to build the beasts.) Like many of the best film monsters, they're almost criminally underused, and act more as witnesses to the plot than as the antagonists promised by the film's promotional campaign. Indeed, they're all but shoved aside once Jonathan conjures some slightly larger beings, the imps Grizzel and Greedigut (Peter Risch and Tamara De Treaux), as accomplices.

This may say more about me than it does about screenwriters Bercovici and Jefery Levy, but it's clear they did their homework on the occult stuff. Jonathan's magic circles have the look and feel of real Hermeticism; Grizzel and Greedigut's names (and that of Kim Novak's witchy cat Pyewacket in Bell, Book, and Candle) are drawn from a famous woodcut of witchfinder Matthew Hopkins; and The Grimoire of Abra-Melin, found on Malcolm's shelves, is a book I actually own. When conjured, the Ghoulies appear to spring from the earth, water, wood--basic occult elements. Although they lend themselves to camp, the scenes of conjuration--particularly when Jonathan mesmerizes and misuses his party guests to revive his dead father--are compellingly edited and ring with doom, thanks to Richard Band and Shirley Walker's score. Credit also to Liapis's performance as a decent guy seduced: We really don't want him to go down that road.

1988's Ghoulies II sees Band's father, veteran B-filmmaker Albert, in the director's chair, with Band's Empire Pictures having established itself in Rome and begun pushing the boundaries of the dtv market. The hardworking carnies of Satan's Den, a haunted funhouse that sets up as part of a larger travelling carnival, face shutdown and eviction if they can't get their attendance numbers up. It's their dumb luck that the Ghoulies, escaping from a righteous demon-hunter (Anthony Dawson) who doesn't survive his attempts at exorcism, hitch a ride on their truck. When the funhouse opens at its next stop, the little goblins are part of the act, first impressing, then murdering, the stray carnival guests who happen upon them. Alcoholic exhibit patriarch Uncle Ned (the great Royal Dano) thinks he managed to conjure them out of a drunken reading from a spell book, but his young nephew, Larry (Damon Martin), sees them for the threat they are, even if carnival owner Hardin (J. Downing) sees only potential profit.

The Ghoulies have evolved since their flight from the Graves estate. Some tweaks to Beuchler's design make them more mobile and emotive, and stop-motion gives them legs for the first time. But to be honest, these creations engender far less affection than the originals. The iconic aquatic Ghoulie, for instance, is far uglier than his predecessor, and not in a positive way. They've moved from accomplices to self-actuated saboteurs (the Gremlins parallels were never clearer), but at least that toilet gag finally sees a payoff. Co-written by From Beyond and Re-Animator scribe Dennis Paoli, Ghoulies II has a great deal more sympathy for its characters compared to its forebear, especially for the hardworking sideshow carnies who unite to drive out the critters after they start their rampage in earnest. Gratifyingly, each performer--in particular Dano and Phil Fondacaro, continuing the franchise's dedication to using short-statured players--contributes his or her all. The dwarf, the strongman, the mentalist, and the bellydancer may be marginalized, but like Uncle Ned, they believe in the show, and they're not letting interloping monsters or acquisitive moneymen (sometimes, as in Hardin's person, one and the same) shut down their innocent fun. 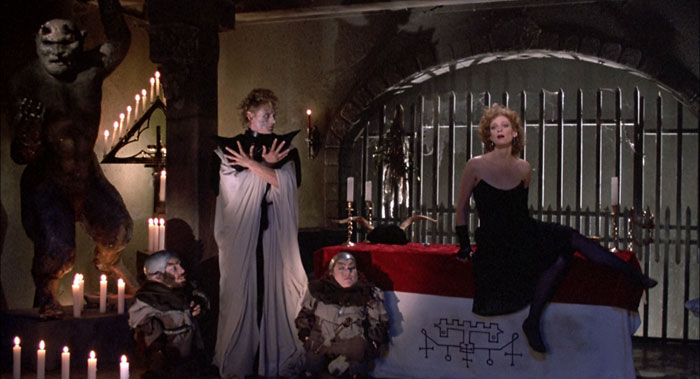 THE BLU-RAY DISC
Shout! Factory's horror imprint Scream Factory continues to win the hearts of genre fans, packaging these 1.85:1, 1080p transfers onto a single dual-layer disc with loving care: a stately audio-visual sarcophagus for the cheese within. Both movies look fresh enough, hair and costuming choices notwithstanding, to have been shot yesterday, let alone thirty years ago. The transfers provide ample texture and a detailed colour palette across the board. Grain is comfortingly fine--a little chalkier on the first film--and the many nighttime and dark interior scenes offer depth and a relative freedom from crush. The image is sharp enough to see the bubbles forming behind Liapis's glowing green contact lenses. Soundwise, the disc offers 5.1 DTS-HD MA and 2.0 mono options, depending on how you'd like to hear it. Nostalgic for my VHS days, I selected mono for a first viewing but found the audio a bit thready. The 5.1 remix fills the room, although the full soundfield isn't always engaged, so it's possible to forget you have surround until a Ghoulie blows up a carnival ride.

Judging by the supplements, Ghoulies II is actually the movie that Ghoulies director Luca Bercovici wanted to make. The monsters are given freer reign to be sloppy, silly, malevolently funny. The original film is "of two minds," as Bercovici puts it in his commentary: His brief was to make a straightforward horror flick, but upon glimpsing Beuchler's creature designs, he instinctively veered towards comedy. The director's yakker, like the Ghoulies, is sort of present but not, and rather apologetic for the film's shortcomings. He's full of praise for his performers, particularly the intriguing Nance and De Treaux, but falls silent for much of the picture--not necessarily a bad thing, though kind of a dealbreaker when, as on this disc, the film's soundtrack volume does not rise to fill the quiet.

"From Toilets To Terror: The Making of Ghoulies" (30 mins., HD) leaves Bercovici out and rounds up some key collaborators, namely Charles and Richard Band, Michael des Barres, and makeup artist John Vulich. As a featurette, it's fairly prosaic; the interviews could easily have been woven into multi-source commentary track alongside the director. Des Barres is charmingly no-nonsense about his melodramatic turn as the villain, while Les Brers Band give sprawling insight into their route to B-picture heaven. Charles's formidable raconteurism peaks with his story of the Ghoulies toilet-art campaign, which helped undo a generation's potty training. The two-minute HiDef theatrical trailer is onboard, plus a stills gallery (haven't seen one of those in a while) of forty images, mostly straight promo material but with some interesting workshop snaps of Beuchler's models and masks. For the sequel, featurette producer Aine Lecht hatches out "More Toilets, More Terror: The Making of Ghoulies II" (17 mins., HD), interviewing Charles Band, actors Kerry Remsen and Donnie Jeffcoat (unrecognizable from the film, since he was twelve years old and blond at the time), and F/X artist Gino Crognale. Find also a two-minute trailer and three minutes of alternate scenes encoded in HD. These elisions mostly draw out the torment of carnivalgoers assaulted by the Ghoulies--there's a lot more mastication of limbs before the camera looks away. The stills gallery for the second film contains twenty-five images. Follow Jefferson Robbins on Twitter 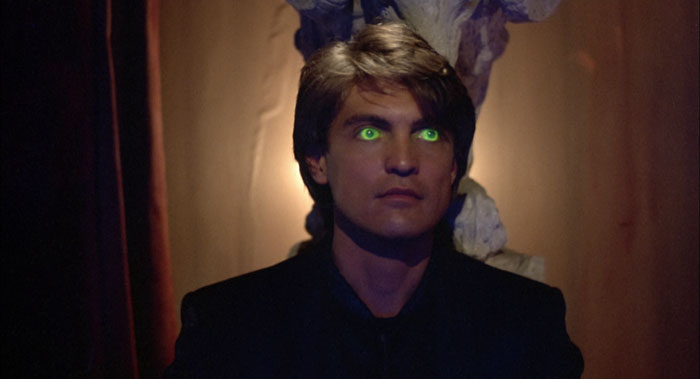