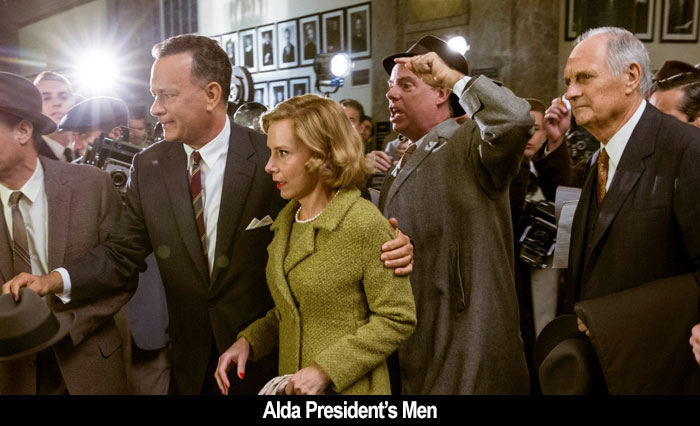 by Walter Chaw Steven Spielberg is the great Hollywood pastry tube. He's packed to the brim with sugary, awards-season sweetness, and he extrudes little nuggets of prestige with the greased regularity of a lifelong prune-eater. In his latest bit of machine-tooled calculation, Bridge of Spies, he makes the unintentional statement during his patented unforgivable epilogue that the American public is a disgusting, moronic, animalistic mob ruled by prejudices and the media (which is the foundation of a different, good movie on the subject of Bridge of Spies)--ironic, because it's those very deficiencies in critical discernment, moral certitude, and sophistication that Spielberg has made a cottage career of taking advantage of. If it's true that all films manipulate but we only complain when they do it poorly (and it's more true than not), then let me complain that Spielberg is an absolute visual savant--proof of it in the first ten, wordless minutes of Bridge of Spies (compare it to the wordless section of Amistad)--and an absolute pandering whore in his inability to deliver an ambiguous ending. He's said as much. He's the only living director who could turn out a masterpiece from a Philip K. Dick short story and ruin it with a sunshine double-happiness lollipop of a ridiculous Hollywood ending. But have no fear: Bridge of Spies never threatens to be a masterpiece for even a moment. It's no Munich or Saving Private Ryan--more like The Terminal. Bridge of Spies is decrepit, highly-polished garbage from almost the beginning, with no relief from its elderly ministrations all the way through to the end.

In a story ripped from the headlines of fifty-five years ago, attorney James Donovan (Tom Hanks) defends soviet spy Rudolf Abel (Mark Rylance) despite massive public disapproval and threats against his family, and engineers a trade of Abel for downed U.S. spy pilot Gary Powers (Austin Stowell) against unlikely odds. A title card introduces the era as 1957: a time of spies; the title card at the epilogue gives confusing information about Donovan's post-Powers career that at the least encourages a trip to WIKIPEDIA. In between, Hanks does his noble Everyman shtick, Spielberg does his Sunday-afternoon-crowd shtick, and everyone goes home certain they've just seen an Oscar contender for Best Picture--which, given the track record for such things, maybe they have. Hanks's Donovan is a staunch advocate for due process and the Constitution--even in the face of his boss (Alan Alda), who wonders why he's "throwing the Constitution in [his] face," and an unctuous judge (Dakin Matthews) interested not so much in the rule of law as he is in making sure the Reds get their man back in a box. He's given multiple opportunities to expound on his beliefs in a script credited in part to the Coen Bros., but I have to think, judging by the general lack of élan to the whole thing, that more credit is due to third-listed screenwriter Matt Charman. Thinking that a script by the Coens needs a third person to get it up to speed should be warning enough.

There's a scene, for instance, in which our Donovan points out that we're all immigrants here and the only thing that makes us American is our agreement to honour the constitution. There's another where he argues that the Russians have already won if we turn our back on the law of due process and other American ideals. It is, in other words, adorably naive. It's the spiritual cousin to Spielberg's own Amistad, in which John Quincy Adams takes on an unpopular but noble cause and pontificates at length about the values of our new day dawning. (Amistad is likewise terrible with a couple of things to recommend it.) Rylance's Abel is soft-spoken, fond of quietly, dryly saying, "Will it help?" whenever he's asked if he ever worries, or if he's upset at the prospect of being executed. He is a dispenser of folksy wisdom, you see, and it's what passes for controversy in Spielberg's Movies for Adults that we actually like this Soviet spy a lot more than the obviously-stupid American flyboy Powers. Spielberg takes sides in Bridge of Spies. Later, he introduces a Yale grad student (Will Rogers; who couldn't like him?) detained by the GDR but forgets to pay it off in Spielberg fashion (cabin by a lake, pregnant wife--no worries, the end titles get it). He takes sides, he's all for diplomacy, but he tells the wrong story and can't resist his hallmarks of over-scoring (Thomas Newman this time, although the introduction of a Soviet courtroom sounds just like John Williams's "Well of Souls" theme), sterile social critique, and being a coward.

The right story is that of Donovan's wife, Mary (Amy Ryan). When Philip Kaufman depicted the era a few years past this one in The Right Stuff, he offered the proper balance between the men doing secret things and the women who hoped they weren't future widows. Mary is the most interesting character in Bridge of Spies. The moment after vandals predictably scare Donovan's family, thus Bringing It All Home, she meets eyes with her embattled husband and offers a wan, ambiguous smile while on the sofa holding two of their children. It's impossible to dissect all the emotions packed into that one look. It's startling when it happens, partly because it's the only genuine moment in the film and directly follows a trademark sequence of Spielberg exploiting children's terror. Bridge of Spies even seems to recognize that it's about artifice when Donovan is presented, at the Soviet Embassy in Berlin, with a fake family for his Soviet client, but their function in the film is unclear, if only to provide more evidence that these people are not to be trusted and will stoop to any level to elicit an emotional response. Taken this way, Bridge of Spies is a pretty fair mission statement for/confession of the Spielberg touch. What does it say that I spent most of a sequence in which the East Germans build their little wall hoping for a cameo from Billy Wilder, who was there, right there, shooting One, Two, Three? Now there's a director comfortable with ugliness and the unresolved story. What would Schindler's List have been like had Wilder made it (it was a dream project of his), instead of Mr. Red coat/one-cufflink-for-two-Jewish-lives Spielberg? Anyway, what were we talking about again?