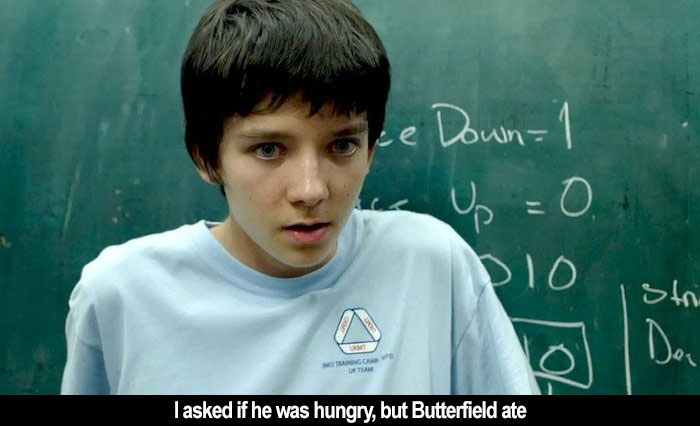 by Walter Chaw Reminding most of Camp in that it's ultimately more of a zoo for curiosities than an invitation for empathy, here's A Brilliant Young Mind, which posits, among all the Rain Man things it posits about autism, that the Chinese, besides being good at backflips, are very good at math. For the Chinese, you see, math is like art. It says so in this book that was written over the course of a thousand years. For the type of audience that gets off on those Olympics puff pieces where the Chinese are portrayed as opportunistic monsters who sell their children to the national team, it's a special sort of Eurocentric auto-flattery. The implication, see, is that although you're about to lose to the Chinese, they're still morally inferior to you. The Chinese, you understand, don't love their children. And they're good at math. Also, they're sexually naive, you know, because it's not like Asia is horrifically over-populated or anything. Later, a British guy quotes Keats in relation to how if truth is beauty and beauty is truth, then math must be the most beautiful thing of all. It's that kind of movie. The kind of movie with a score of industrious violin pulls and ambitious, then sad, keyboards. It has a moment where the evil dragon uncle of the Chinese mathlympians shouts, in perfect Mandarin, "What are you two doing?" and the film translates it as, "Are you in a relationship?" It's that kind of movie. You'll like it if you're that kind of person.

The "somewhere on the spectrum" kid is Nathan (Asa Butterfield); his long-suffering mother is a Sally Hawkins-type, Julie (Sally Hawkins), who falls for bitter, diseased former math genius/teacher Martin (Rafe Spall). By the end of it, Martin will learn more about himself than he teaches Nathan about math, allowing him to find love again with the poignantly-widowed Julie even though MS has rendered him impotent or something. Anyway, it's handled in a really lovely way, scored with a strum-chucka-pluck acoustic guitar. There's also a violin. It's like Mumford & Sons having gentle, generous, Honours-English sex. Hawkins is always good and I'm looking forward to her being allowed to do something other than be wonderful in bad movies. I would also like to see her offered a role where she doesn't have to cry for once. There's a scene late in the film where she tries to explain to her beautiful-mind boy about love, valuing yourself, and the pain of being a parent that deserves its own movie. At the least, it doesn't deserve to be stashed away in the middle of this piece of shit.

Nathan is picked to compete for the mathathon, where he meets other differently-abled math geniuses, including one played by Alex Lawther, who did this once before as the younger version of Alan Turing in The Imitation Game. He also meets a truly disturbed little guy who tries connecting with others through his rote memorization of Monty Python sketches (making him actually more normal than the film is portraying, if about thirty years out of time). The problem with A Brilliant Young Mind is that there seems to be an urgency in wanting to tell the story of autism, but that urgency has met a complete inability to tell a story that isn't massively condescending and explicitly from the point-of-view of someone who has very little empathy for the disorders on display. I'd offer that a sense of wonder at disability is every bit as offensive as a sense of disgust. The biggest surprise is that "Me and Julio Down by the Schoolyard" isn't on the soundtrack. It's also surprising that Zach Braff didn't direct this. Anyway, Nathan falls in love with a little Chinese girl, Zhang (Jo Yang), who turns the final third of A Brilliant Young Mind from one kind of film that you've seen a hundred times before into another kind of film that you've seen a hundred times before. At this point, I'm sort of amazed that movies like this keep getting made, which makes me the stupid one. Go go Chinese mathbots!