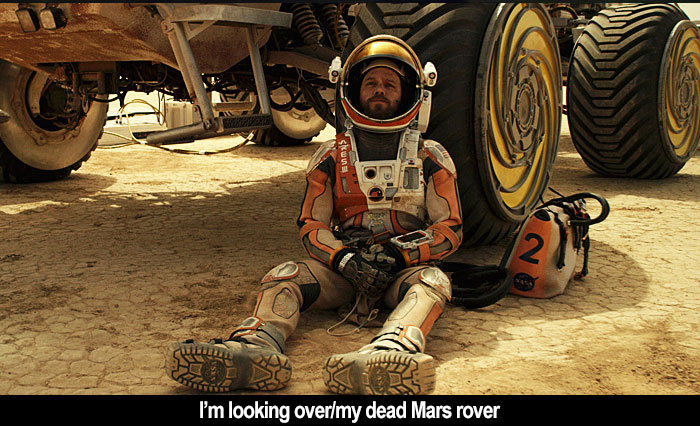 by Walter Chaw The riposte, and it's a fair one, is: What would make you happy? And the frustrating response is, "I don't know." The problem is this (and in a movie about solving problems, it's germane to raise one): that The Martian, Ridley Scott and Drew Goddard's faithful adaptation of Andy Weir's bestseller, is essentially a bwana story in which smart and resourceful black and Chinese people band together to save a white explorer who declares himself both "colonizer" and "pirate" at various points in the movie. It's a summary of a certain kind of film, too, the space opera that used to be all the rage in the 1950s--a decade actually interested in exploration rather than defunding NASA and rabid anti-intellectualism. The only thing missing is a space chimp and a space lady with rockets in her brassiere. I confess that I probably wouldn't have even been thinking much, or perhaps as quickly, about the racial politics of this film had Matt Damon, the bwana in question, not "whitesplained" to a black producer (a female black producer) what diversity means as regards his wish-fulfillment reality series "Project Greenlight". Or if it weren't directed by Ridley Scott, whose last film, Exodus: Gods and Kings, required volumes of whitesplaining itself as to why the principals of his Middle Eastern/African tale were white.

So what would have made me happy? If an Asian (there must be one of the 2 billion of us on the planet up to the task) were cast as über-starman Mark Watley instead of Damon? I don't know--because, you know, casting an Asian as someone as resourceful and good at math as Mark is could be seen as something of a stereotype in itself--though of course the head of JPL on Earth is a portly Chinese guy who doesn't get a credit on IMDb, naturally, although he's a major player. What if Mark were a black guy--Idris Alba, perhaps. Of course he's too street for Bond, so he'd be way too street for an astronaut. Maybe Don Cheadle. Or Terrence Howard, who gets a whole article on how he's a crazy person while Mark Wahlberg gets a lifetime pass for beating an Asian guy for being Asian. What about a woman? I guess it doesn't really matter because, for the most part, The Martian doesn't really care. I don't mean doesn't care in a Gene Roddenberry sense, but doesn't care as in there isn't character development in all of the 140+ minutes of The Martian so much as there's a description of types and then a collection of pretty scenes and expert vistas. The only reason I'm raising this racial question at all is because The Martian doesn't do anything to replace that conversation with a different one. I guess what would have made me happy is a movie that's about something other than pluck.

As in the book, a manned mission to Mars aborts suddenly, stranding Mark, thought dead. But he's not dead. This makes for an embarrassing public relations thing for NASA head Teddy (Jeff Daniels, who, between this and Steve Jobs, has reached terminal let's-have-a-friendship-break velocity), his PR officer (Kirsten Wiig, tragically wasted), and head of something-something Boromir (Sean Bean), who lands the single best joke in the entire thing--a joke so meta, so brilliant, that it almost saves the entire movie by itself. The film then flits back and forth between Mark trying to stay alive on Mars with limited resources and NASA--and eventually CNSA--trying to rescue him with unlimited resources. See, it's science-fiction. It's a weird sort of fantasy, too, in that it posits an Earth, a United States, that actually cares about exploration for its own sake enough to fund it. The Martian joins Interstellar in that way as hopeful shots across the Conservative bow. Its hero is a botanist of all things who figures out how to cultivate Martian soil to extend his life on the planet for a couple hundred crucial days as the mostly black and Chinese scientists back on Earth figure out a way to rescue him. Fair? I don't know. I do wish that The Martian had given me something else to discuss beyond how this is a slightly more multi-cultural Cast Away--or, you know, a Robinson Crusoe on Mars where you also get to see the work put into rescuing the hero from the other side. It would've been better with a monkey, though.

Bloated, dry as a soda cracker, and 100% safe for awards-season consumption, The Martian can be allied with those old Merchant/Ivory productions as well. It's a period piece, a costume drama; the lead is witty and of marriageable age, and we presume he comes from a good family, though the film can find no time for this despite its distended length. Plus, like those musty old Merchant/Ivorys, it's utterly professional and appears right around the time that old folks' thoughts turn towards Oscar telling them what they should watch. Even most of the "fucks" are redacted to preserve delicate sensibilities. I'm not kidding. It's the easy-to- masticate and digest version of Philip Kaufman's The Right Stuff in almost exactly the same way that Spotlight is the fallen-and-can't-get-up version of All the President's Men: elderly films of a stately demeanour targeted--laser-sighted, in fact--to a very specific demographic that wants their action tame, their sex not to be spoken of, their heroes white as a sheet, and the hero's helpers all the colours of the multicultural rainbow. What does it say that The Martian makes Apollo 13 seem lively? It didn't used to be like this. There was a time when major movie studios were producing things like Apocalypse Now that had, still has, zero fucks to give about whether you like it or not. The Martian is ingratiating like Eddie Haskell. It's a bushel of corn, boiled just so with a little butter and salt on a warm Iowa day. You should read Ray Bradbury's "Mars is Heaven," just for a quick reminder of what fairytales of succour inevitably turn out to be.