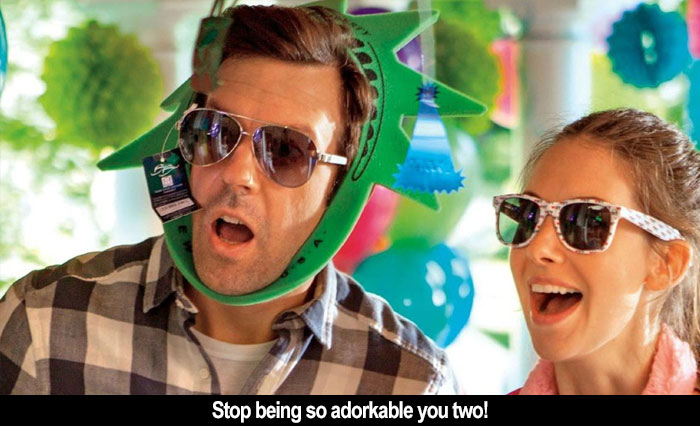 by Walter Chaw Massively over-written, smug, baselessly self-assured, and world-weary in the way that people who watch a lot of "Sex and the City" and "Girls" are world-weary, Leslye Headlund's rank, unwatchable Sleeping with Other People is like that date that Death goes on "Family Guy" with the girl who tells Him you can't hug your kids with nuclear arms. To say it's awful is unfair; better to say it's tedious as shit. It's a chronicle of insufferable, half-wit narcissists and, given the success of stuff like Obvious Child, hell, it's worth a try, right? Honestly, though...and no one's asking, but...wouldn't it be better to not have a career than be tied to great white albatrosses like this? Sleeping with Other People is like Diablo Cody on steroids, complete with an entire album's worth of soft-alt rock and Lilith Fair covers on the soundtrack. And much like Cody's script for Juno that has references to Soupy Sales flying from the mouths of babes, this gem has a college girl in 2002 warning a prospective beau not to reference The Graduate on learning that her name is "Elaine" when, you know, "Seinfeld". Jesus, c'mon.

Master cocksman Jake (Jason Sudeikis), a fast-talker in the mold of the master cocksman played by Robert Downey Jr. in The Pick-Up Artist, peppers his speech with references to Aaron Sorkin and "Game of Thrones" and Wes Anderson and Malcolm Gladwell because he's totally hip. It's like When Harry Met Sally but more scatological, complete with the shopping scene and the orgasm conversation and the best friend (Natasha Lyonne) who talks frank and observes that men and women can't be platonic friends. Amanda Peet is in this (of course), as a powerful businesswoman who gets hit on mercilessly by our cocksmith, and if When Harry Met Sally... hasn't aged well at all, consider another entire, lesser feature packed with the same dense, desperate patter, strolls in Central Park, girly panic attacks, and single notes on the middle keys of a piano. I had a relationship like this once, in graduate school. I spent so much time being charming that I wanted to rabbit-punch myself in the sack until I stopped. It doesn't make Sleeping with Other People a good movie, understand; it makes it a movie about the very worst aspect of a personality, replicates it, then runs it for about 100 non-autocritical minutes.

Consider a mid-film kid's birthday party, complete with David Bowie "Modern Love" cue, in which the object of Jake's "platonic" affection, Lainey (Alison Brie), teaches a party full of hell-spawn how to get funky. And then Marc Blucas shows up, because the movie just wasn't boring enough. The problem with Sleeping with Other People, aside from that tedium thing, is that its view of relationships is as appalling as its ear is tin. The real danger of someone shooting their own scripts is that the director believes the writer is a genius. It explains why all the conversations here are straw conversations. It's why the entire thing has been shot with three cameras, the better to avoid interfering with the brilliant dialogue--and why no one called "shenanigans" when stuff like "hey, I got into medical school so we only have a few months to figure out we're in love and shit" showed up as plot points. Oh, and the problem with using "Modern Love" in a romance is that it demonstrates at once a lack of imagination and the likelihood that you haven't seen Mauvais sang, which owns "Modern Love" and always will and always should. Guess you're not as well-versed as you'd like to seem.