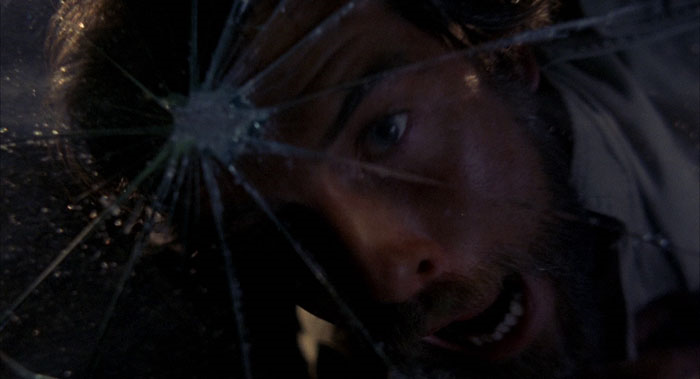 by Bryant Frazer Director John McTiernan's film debut is a true '80s oddity. Pierce Brosnan sports an ersatz French accent in his first big movie role. He's billed opposite Lesley-Anne Down, riding the downhill slope of her post-Sphinx career, but the two have only one scene together. McTiernan's script, to date his only screenwriting credit, is some superficial fluffernutter about restless inuat (spirits of Inuit mythology) haunting the L.A. living--except when it's a diffuse meditation on the stateless qualities of Angelenos and California in general. Even the score, an improvisational guitar-and-synth freakout by Bill Conti and (I shit you not) Ted Nugent, is genuinely weird.

Ambitiously following two separate protagonists in two different time frames, the script fails to develop either lead character to a significant degree. But everything that happens to them feels personal, like an arcane memory or a tense life experience reclaimed for the screen. It starts with Doctor Flax (Down) being awakened by an insistently ringing phone. As she talks into the receiver, the camera peers across the face of the phone to catch her, barely illuminated, as though she's been roused in her bed. She flips on a light switch, and we see that she's crashed out on a cot, still dressed in a white coat. The clock on the wall, an institutional design, reads 3:20 a.m. It's the middle of the night, and she's fallen asleep on the overnight shift at a hospital. The backstory is dispensed soon enough--there was a divorce, she moved across the country, she misses her friends--but what makes her character worth giving a shit about is that rude awakening. McTiernan captures the disorienting, somewhat shaming experience with vivid clarity. Anyone who's ever overslept on an important deadline will recognize the feeling he's going for.

Unfortunately, Down all but disappears from the narrative a few minutes later. She hurries downstairs to find her fellow MDs trying to figure out what to do with the man the cops brought in (Brosnan), who's wearing blood-soaked clothes and won't stop shouting in a hinky French accent. In a striking shot captured by a backward-plunging camera, he lunges out of bed and grabs her, whispering something into her ear as he drags her to the floor. Almost immediately, Down starts having visions, experiencing the dead man's last days from his perspective, and the movie shifts its point-of-view character accordingly. He is Jean Charles Pommier, a French anthropologist and world traveller just settling with his wife, Niki (Anna-Maria Monticelli), in Los Angeles. They are made to feel not so welcome when they find graffiti spray-painted on the garage door of their new home. Proving his own restlessness, Pommier espies a bunch of leather-clad rockers driving around the neighbourhood in a black van and starts to follow them with his ever-present camera in tow. Things get weird quickly: Despite Pommier's being sneaky, gang boss Adam Ant looks directly into his lens and Pommier ends up taking pictures paparazzi-style as Mary Woronov gyrates for him on top of a car. That sounds like a pretty good gig (the way McTiernan shoots it, from Pommier's first-person perspective as Dancing Mary towers over him, is both exciting and unsettling), but Pommier is troubled. He feels that this wild bunch of unsleeping, homeless anarchists constitutes a violent cult of, well, nomads. And his new punk-rock friends quickly take on a menacing quality--especially when he discovers that they don't actually show up in his photographs.

The social and historical context for these inuat is vague, which is fine. Supernatural horror movies seldom suffer for a lack of backstory. Beyond a certain point, all you need to know is that Pommier has discovered some evil ghosts who didn't want to be noticed, and now they're after him. But even by its own loose standards, Nomads is disjointed. There's a scene where Pommier goes on the run and takes refuge in an old, apparently abandoned house, where he encounters an elderly nun (Frances Bay). "They know about you," she confides to Pommier. "If you've never run from anything in your life, run from this." The place turns out to be crawling with nuns--a small gang of them runs rampant through the halls, flashing their tits for the camera and leering into the handheld lamps that spotlight them. Set in blue-lit corridors that recall "Total Eclipse of the Heart" as well as Suspiria, the sequence may be Ken Russell-lite, but it's a memorable and delightfully creepy routine. It has very little to do with anything else in the picture, though. Are the nuns a hallucination? Are they inuat? Or are they similarly restless spirits who have found an uneasy home with religious trappings? Who knows?

For that matter, why is Dr. Flax possessed by the memories of a dead man? Is this always how it works when the inuat kill someone? It certainly complicates the narrative. Just as we're getting to know Pommier, the picture abruptly shifts gears to follow Flax instead. She's been retracing Pommier's footsteps, eventually finding herself at his house, where she makes friends with Niki and faces a home invasion by the inuat. It represents a second disorienting and suspense-busting perspective shift, but it makes some dramatic sense, as we learn that the inuat are now chasing her--presumably because she has spotted them, too. And it briefly transforms Nomads into a two-woman chamber drama suggestive of late-Bergman. There is a hint of sexual tension between them; waking from a deep slumber, Flax wonders if she was in bed with Niki, who quickly assures her that she spent the night on the couch. Worth noting: while McTiernan dresses both women in intermittently revealing clothing--Niki's bathrobe is in perpetual danger of falling open and Flax is forever on the verge of flashing a breast--Brosnan is easily the film's most dramatic nude, in a full-frontal shot carefully lit to reveal just the barest hint of Monty. Nomads is not an especially sexy movie, yet there is a grown up, Euro-style eroticism to it.

McTiernan graduated from low-budget horror movies to A-list action when he was hired to direct Predator. What did Arnold see in Nomads? Well, despite the fogginess of his story, McTiernan's direction is sharp, with an agile, prowling camera lending scenes a tense atmosphere even on a near-zero budget and with nothing much happening on screen. (You gotta wonder whatever happened to DP Stephen Ramsey, who lights the hell out of this but never shot another feature.) That's the critical line on Nomads--it's a supernatural programmer with stylish and precise filmmaking moves that are wasted on a confusing and underdeveloped script, although the fingerprints of a top-notch action director can be found all over it, if only in retrospect. Aficionados will note, as one example, the dream sequence in which Brosnan throws one of the Nomads off the roof of a building: The process shot showing him falling from overhead is recapitulated in McTiernan's later Die Hard.

Nomads is more than a rote technical exercise, however. It hits notes of real melancholy. Pommier jokes with his wife about the American melting pot--he says he will work five-hour days and eat supermarket food wrapped in plastic. (He calls it hamburger commes les Americains.) Towards the end of the film, he decries "our bourgeois life in this civilized place" and laments, "we have wandered so very far from home." Though it's possible to read too much into that kind of dialogue, I looked into McTiernan's background on a hunch and was unsurprised to learn that he grew up on a farm on the East Coast and aspired to become a New York theatre director before eventually heading west on an AFI fellowship. (Today, he lives in involuntary exile from showbiz after a wiretapping scandal and incarceration derailed his career, perhaps for good.) I'm not saying it's especially novel to express mixed feelings about a move to Hollywood, home of so many lost souls, but it is impressive to manage to make a horror movie that riffs on a similar sense of displacement. The subtext jibes nicely with the film's mythology, and that makes Nomads a personal work, permeated by sadness. It's not just watchable but rewarding, too, in its own small way. 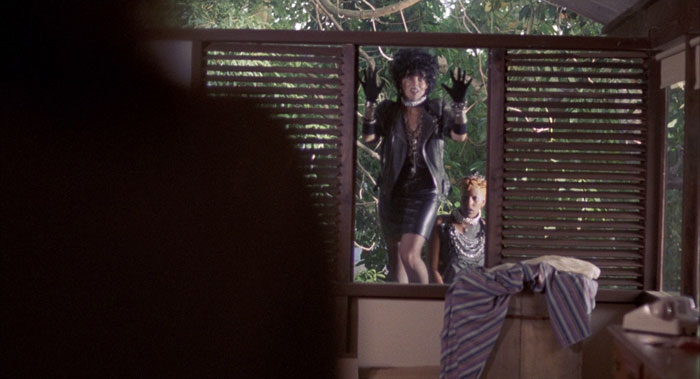 THE BLU-RAY DISC
Scream Factory upgrades Nomads to HD with a Blu-ray that's attractive--but not too attractive. Sourced from what appears to be an interneg, the new 1.85:1, 1080p transfer is mostly clean, although some shots are speckled with positive and negative dust. (The worst flaw is a vertical scratch that materializes in a long shot at about the 70-minute mark; it may represent damage to the camera negative.) Film grain is mild but plentiful and blacks have not been crushed; if anything, the occasional highlight looks clipped, but that, too, may have happened in camera rather than in digital colour correction. The image could certainly be stronger, but this presentation is up to snuff. The monophonic DTS-HD MA 2.0 audio clearly reveals limitations of the source, which is loose and boomy, with a brittle quality to Nugent's squealing guitars. Dialogue remains clear, mostly, though the original recording quality varies widely from scene to scene, an artifact no doubt of the low budget.

Neither McTiernan nor Brosnan show up in the disc's modest supplemental section. Instead, Lesley-Anne Down stops by for "Paging Doctor Flax: With Lesley-Anne Down", a 16-minute HD interview that opens with her suggestion that Nomads fans have "interesting," "strange" minds. You get the sense she's trying to be diplomatic, though she does speak a lot more frankly than most participants in this sort of thing do. She discusses her background as a child model and actress, including her screen debut in what she describes as a mainstream "soft porn" Britpic, and why she doesn't work in film anymore. (She chalks it up to a lack of "etiquette" and an obsession with penny-pinching.) On the subject of Nomads, she remembers McTiernan's "gruff" demeanour early on. No wonder--she claims she was forced into the role against his will and concedes that she was probably wrong to accept the part in the first place! "I don't think there was very much sense in it at all for anybody," she remembers. "I think we all just sort of...said the lines in a strange way." And composer Bill Conti drops in to discuss the process of recording the music in the 17-minute, HD "Musical Nomads: With Bill Conti". He says it was the first and last time he improvised a score, talks about working in a bad neighbourhood of L.A. with Nugent (who was, as always, packing heat), and remembers McTiernan as a very sure-footed director on set. "John had thought it out, he had planned it, and he knows what he wants," he says. Also on board is a two-minute theatrical trailer, a three-minute cache of black-and-white production stills and publicity photos (the quality is well above the norm for this stuff), and a 30-second radio promo for the film. 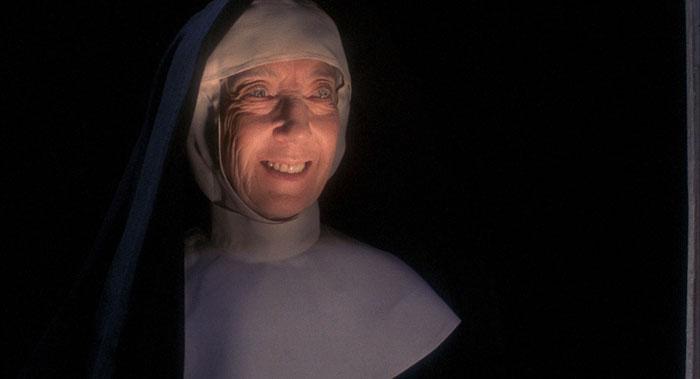