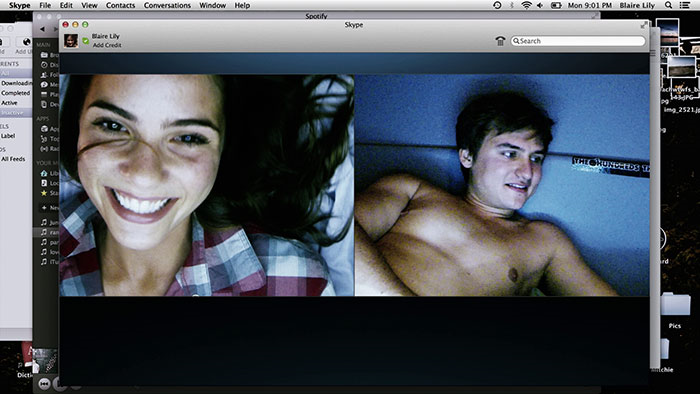 by Bill Chambers SPOILER WARNING IN EFFECT. Unfriended's formal constrictions--the action unfolds entirely as a screenshot--aren't unique (the Canadian short film Noah got there first, and then there was that one segment of V/H/S), but they still make for a novel storytelling engine, especially in the uncharted realm of feature filmmaking, where Unfriended's closest precursor may be 2000's hugely-dated Thomas in Love. (Dated less by its technological crudity than by its unprophetic view of cyber-living as deviant behaviour.) It's fascinating to see the effect that being tethered to a computer monitor has on cinematic syntax. The task of laying out the horror-bogey's tragic backstory is here accomplished with a couple of YouTube clips, for instance, and this kind of graceless infodump in lieu of structured flashbacks or verbal exposition feels perfectly valid. Moreover, the moment the protagonist, Blaire (former Miss Teen USA Shelley Hennig), is revealed via webcam feed as the computer's owner, these videos--conveying the suicide of a high-school student named Laura Barns (Heather Sossaman)--become retroactively poignant: the idle guilt-surfing of a teenage girl. Everything is diegtic in Unfriended; even the on-the-nose soundtrack cues come straight from Blaire's playlist. For a century people have argued the superiority of books over movies because the latter "can't tell you what a character is thinking," but Unfriended and its ilk have stumbled on something: To espy a person's mouse-clicks is to be privy to their mood, their impulses, their leaps of logic. It's like reading their mind. While I wouldn't want to watch too many movies in this narcissistic key, the innovation is undeniable.

Blaire answers a Skype call from her boyfriend Mitch, or "Mitchy" (Moses Storm). They talk about prom night, which is coming up--she says that's when she'll finally be "ready," and is in the midst of giving him a sneak preview of the goods when the rest of their friends butt in for a group chat. What to say about this clique except that it consists of five babes and one schlub (Terri's Jacob Wysocki), who, rather cynically, is the only one with the technical know-how to try to exorcise Laura Barns's ghost from the machine. It's clear from all the sordid sexual history that comes up later in the film that Wysocki's Ken was strictly on the outside looking in at that, and a more provocative script might've made his death-by-hand-in-blender a hoax and the others' murders Ken's Saw-like avenging of his DUFF status. Not that there's not anything timely or topical about the cyber-bullying that led Laura to kill herself, although the particulars are strangely apolitical (passed-out drunk, she shit herself; these chuckleheads filmed it; vid went viral1) and make Unfriended's appropriation of the iconic cue-card video left behind by 15-year-old Amanda Todd--who took her own life after a topless photo, obtained with much coercion by an online predator, was recirculated among her classmates, who deluged her Facebook page with insults (Todd was also routinely humiliated for struggling in school as a result of a learning disability)--seem in even poorer taste than things associated with producer Timur Bekmambetov usually are. My heart bleeds for Amanda Todd, and I wish every one of her tormentors a miserable life; what happened to Laura Barns is...unserious.

What does resonate is the casting of Renee Olstead, whose online privacy was invaded in the days before the so-called Fappening; and the film scores some satirical points via the fact that not even the threat of imminent death has these kids2 logging off--the (al)lure of the Internet is too compulsive, nay, umbillical. Other dramatic conveniences similarly play as wry commentary, such as the near-instantaneous peanut galleries and kangaroo courts that materialize beneath any Facebook post, though the movie grates when it uses its aesthetic limitations as a tool of obfuscation, for instance to avoid addressing how exactly Laura is managing to off her victims. (Signal interruptus generally obscures the precise fates of everyone killed in Laura's reign of terror.) Indeed, a tendency towards bet-hedging becomes depressingly conspicuous in the film's closing moments: Having wiped out Blaire's entire social circle, Laura proceeds to throw Blaire, her best friend from childhood, under the bus by broadcasting an unseen portion of video implicating her directly in Laura's suicide. The public outcry is swift and brutal, condemning Blaire to social purgatory for eternity--worse, for the rest of high school! It's a fate worse than death: shame. Then Laura kills her anyway, undoing a sense of poetic justice for the sake of a cheap and hackneyed stinger. Unfriended portends a revolution, but it's click-bait after all.

THE BLU-RAY DISC
Universal brings Unfriended to Blu-ray in an unimpeachable--or, at least, difficult-to-impeach--1.78:1, 1080p transfer. On a TV, it looks like a pure computer signal, with no obvious artifacts beyond what's been artificially introduced into the image. (The faux-pixellation of the Universal logo, accompanied by a subwoofer pop!, had me convinced for a few seconds that there was something wrong with the disc.) Viewed on an actual computer monitor, the fonts and icons of Blaire's display are considerably less sharp than those of the OS proper--think of it as akin to turning on Microsoft's ClearType. Nevertheless, watching Unfriended on a desktop or a laptop creates the distinct sensation of another entity taking over, pushing the film well and truly through the looking glass. The attendant 5.1 DTS-HD MA track is narrow but deep--in other words, the audio doesn't really extend beyond the forward soundstage except to goose the scares with bass. Although voices do sound processed to varying degrees, the mix's dedication to realism never comes at the expense of clarity. Packaged with DVD and digital copies of Unfriended, the platter is featureless save for startup trailers previewing Trainwreck, Pitch Perfect 2, and The Man with the Iron Fists 2. 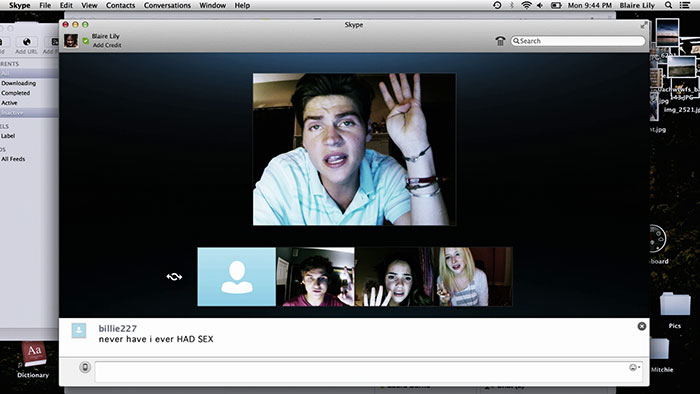 1. Really the worst thing about it is that it's called "LAURA BARNS KILL URSELF."

2. I say "kids," but at 25, Wysocki appears to be the youngest cast member. Seen mostly from the shoulders up, though, these actors pass for teenagers, although their typing should probably be a lot sloppier.