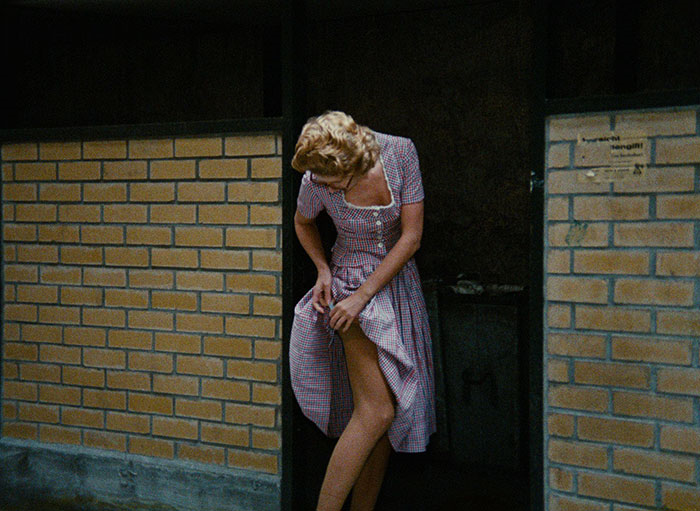 by Jefferson Robbins When beleaguered costermonger Hans Epp (Hans Hirschmüller) shouts his wares in the courtyard well of a grey Munich apartment block, he might as well be shouting into the void. Although his singsong calling of the prices of fruits is mesmeric, it summons practically no customers. Blocky and straining against his own skin, Hans has been humiliated all his life, and the manner in which he makes his livelihood is a further humiliation in the eyes of his family. The word used for "livelihood" in Rainer Werner Fassbinder's The Merchant of Four Seasons is the German noun Existenz. Clearly, it has multiple edges.

The knives are pointed every which way in this, Fassbinder's breakthrough film. Take Manfred Wagner, the never-seen friend who follows Hans off to the Foreign Legion in the years just after World War II, and meets his death. Only fleetingly mentioned, Manfred's name melds Germany's national (and nationalist) composer with Byron's mournful hero, who defies conventions and chooses death over conformity.1 Hans's mother (Gusti Kreissl) acidly declares Manfred the Good Son of Germany, the one who should have lived. As Hans and his wife Irmgard (Irm Hermann) negotiate their marriage of last resort, they're confronted at every turn by crucifixes, many of them angled or toppled, and the condemnations of Christian structures follow through all the way to Hans's Last Supper. Fearful of poverty, Irmgard is beckoned by offers of prostitution on a Munich street while standing before store-window displays that promise blissful matrimony and furnished domestic comfort. We can laugh--and do--at the absurd, puppet-like way Fassbinder's performers respond to trauma, but Fassbinder always holds the moment too long for laughter to be a comfort and so indicts the audience as surely as his characters.

That's the point, really, since Fassbinder was a social provocateur of the first order. His target was Germany, and before hitting that mark his arrows had to first thread the needles of class, family, faith, and sex.2 Hans goes from soldier to policeman to merchant--a progression reflecting Germany's own, from bellicose military empire to patrolled state to economic engine of Europe, each condition mortifying in its own way. He only seems to live fully when engrossed in Rocco Granata's "Buona Notte"--sentimental schlager of the kind that transfixed Germany in the 1950s and after. It's the song with which he serenades Irmgard, while she struggles to leave him as a consequence of his abuse. The medical condition that befalls Hans is a ridiculous bit of melodrama in a film full of same, but still it ticks in him like a time bomb. He lives in barrenness, hawking fruit in those courtyards, and the frame only comes alive with passersby and greenery once he turns over the street-vending to a new hire, Anzell (Karl Scheydt), who's already cuckolded him. Slowly-mounting success doesn't agree with Hans; the more he plays by the rules, the deeper his depression. The passive defenses offered by his remote, confident sister Anna (Hanna Schygulla) and the all-seeing blue eyes of his daughter Renate (Andrea Schober) are no succour.

Cunningly, the cinematic signals around Hans are all cockeyed: The one time non-diegetic music arises (uncredited, though presumably from Fassbinder's long-time composer Peer Raben), it's beautiful and pastoral--but it's the moment when he sinks into his deepest funk, unable even to find pleasure in the arms of his "one great love" (Ingrid Caven). Hans and the characters around him assume aesthetically-captivating but nonsensical postures, and hold them for long spells: Anna lying across a couch with Renate, Irmgard's coital contortions with Anzell, the sodden drinking companions who freeze in place while Hans drinks himself to death, his own boneless slump in a parlour chair.

Even with these flourishes and misdirections, Fassbinder is on the side of this wife-beater and drunk, who came near death in wartime (as a prisoner of El Hedi ben Salem) and has yearned for it ever since--maybe even before then. The humour of The Merchant of Four Seasons is blacker than pitch but wrought with pity. Fassbinder gives us a man heaped with horrific expectations, navigating a social system imposed from without and equipped for failure. Hans suffers, and imparts suffering, and by doing so remains part of the machine. He beats his wife and neglects his child, who nonetheless hold out hope for him. When Irmgard leaves Hans or, later, engineers a conflict for him, it is a seizure of control, an ordering of her life to her desires at last, yet she cannot escape the gravity of his self-loathing. Those long silent gazes, more than just aping or homaging Douglas Sirk, emulate the ice of chronic depression, each moment lingered on to evoke the hopeless weight carried by the simplest interpersonal gestures when that veil falls on us. 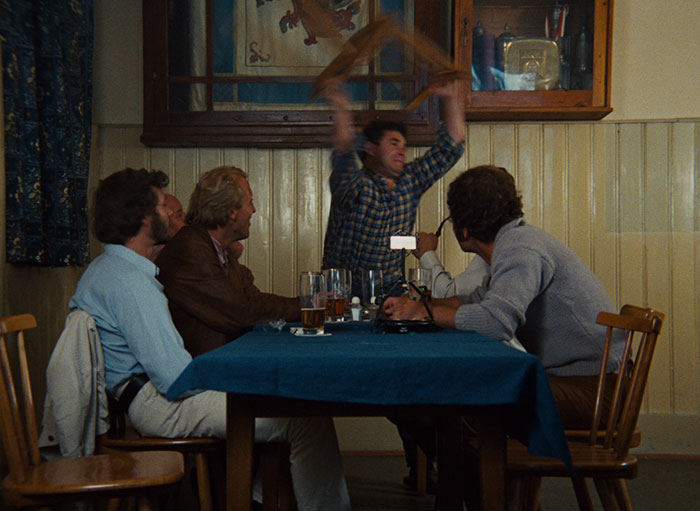 THE BLU-RAY DISC
Irm Hermann's glycerine tears gleam like icicles in Criterion's excellent 1.37:1, 1080p presentation. From a restoration standpoint, that's a visual achievement; from a stylistic perspective, it's perhaps more visible artifice than Fassbinder himself would have stood for, presuming that film projection would always blur the twinkle. The transfer takes deep pleasure in the colours coaxed out by DP Dietrich Lohmann and in their gradations, too, as in the delirious reds of Hermann's and Caven's hair. Some dark patches banish all contour into their depths, but these feel natural. Grain is so fine it hits a seldom-seen sweet spot, both present and absent at the same time. The enclosed space in the Epps' flat and the arch-framed exterior courtyards all feel like inhabited places, fluidly lit by Lohmann and given life by Kurt Raab's set creation and dressing. (Typical of Fassbinder, cast and crew are largely one and the same here, and Raab plays Hans's disdainful brother-in-law.) The image masterfully displays a wide palette of skin tones, from Klaus Löwitsch's chestnut tan to Hermann's veined ivory. The LPCM 1.0 audio marks The Merchant of Four Seasons for the chamber drama it is: People arguing in small rooms don't need much dynamic range. Yet the clarity is above reproach, and there's room enough for clangour and violence amid the drear and recriminating dialogue.

Fassbinder's peer and friend Wim Wenders speaks highly of the late director and illustrates the background they share in the sole audio commentary, imported from Wellspring's 2002 DVD edition. Both born in the months following the end of WWII, the two men were part of a cadre of directors who more or less throttled the postwar German film industry into being and put its cinema on an international stage. They did so, first, by absorbing all the American movies and music they could--not a tall order, given the occupying presence that brought its pop culture along with it. "It was so much more about fun, about pleasure, than whatever we received from our own German background," he reports. As Wenders characterizes it, his attendance at Germany's early film school was something of a joke--and Fassbinder's hyperachieving presence only made it more so. "We were the first film students in Germany," he says, "and they didn't even know what to teach us." He isolates a faux-Bavarian character in Fassbinder's dialogue--a technique the writer-director employed to further alienate the characters from the audience, but which wouldn't be distinct to a viewer without some German fluency.

I take issue with Wenders's decision to term Irmgard a "monster"--there's nothing terribly monstrous about a woman delicately exerting influence in her home over a man who's done far worse to her. Irm Hermann is right next door on a 2015 interview featurette (10 mins., HD) and can speak for herself, though what she says is a little dispiriting. She characterizes her career as a wholesale creation of Fassbinder, who discovered her working as an office secretary, recruited her to his projects, cajoled her to quit her job, and flooded her like a vessel with his characters and scripts for the next decade. Hirschmüller is likewise freshly-interviewed (14 mins., HD) to discuss the intensive rehearsals on Fassbinder's sets that led to lots and lots of one-take shooting with no variation from the established script and blocking. (A nice way to save money on film, too.) Fassbinder's 1969 Katzelmacher is a point of reference across Hirschmüller's featurette and that of scholar Eric Rentschler (26 mins. HD), where the Douglas Sirk influences are examined in more depth. (Wenders quotes Fassbinder as saying that after discovering the German expatriate's Technicolor weepies, "Suddenly I began trusting myself.") In the keepcase insert, Thomas Elsaesser's inner-leaf essay makes the provocative case that Hans is a witness of sorts even to those scenes where he's not present, with Fassbinder's camera suggesting his viewpoint on Irmgard's adultery, his own funeral, and so on. Perhaps the melodrama, as for so many of us, is all in his head. Follow Jefferson Robbins on Twitter 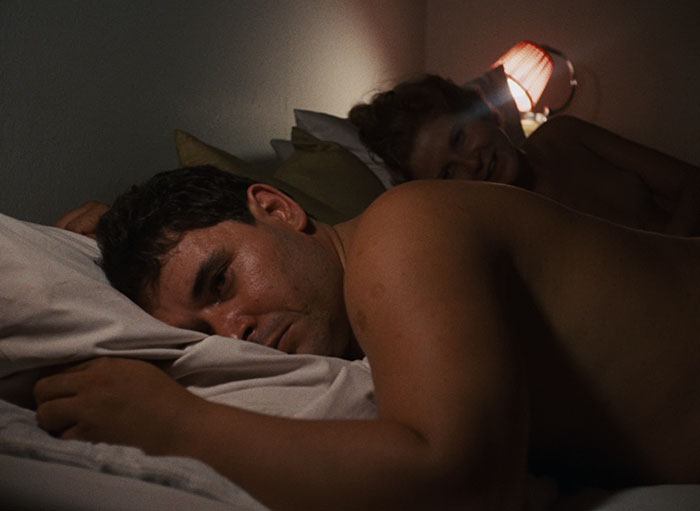 1. Manfred conjures seven Spirits and asks them to bestow "forgetfulness" and "oblivion" upon him. "It is not in our essence, in our skill," they respond. "But--thou mayst die." return

2. The late historian Tony Judt's massive book Postwar returns again and again to The Marriage of Maria Braun (1979) as a touchstone for understanding Germany as it came to be, after launching and then disavowing the bloodiest war in history. Judt writes: "The apolitical, consumerist, American-protected cocoon of the Bundesrepublik was not just imperfect and amnesiac; it had actively conspired with its Western masters to deny the German past, to bury it in material goods and anti-Communist propaganda. Even its constitutional attributes were inauthentic: as Fassbinder put it, 'Our democracy was decreed for the Western occupation zone, we didn't fight for it ourselves.'" return