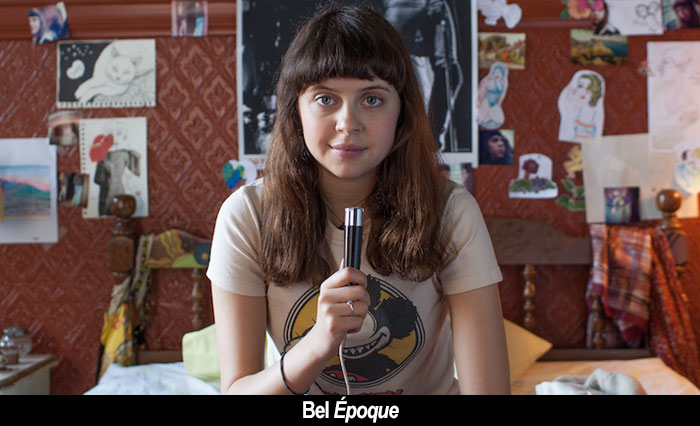 by Angelo Muredda "Everything looks totally different to me now," announces brand-new, card-carrying adult Minnie (Bel Powley) towards the end of Marielle Heller's The Diary of a Teenage Girl, based on Phoebe Gloeckner's semi-autobiographical graphic novel about her coming-of-age in 1970s San Francisco. It's an old sentiment, practically a requirement of the bildungsroman, but credit ought to go to both Heller and Powley (in their respective feature debuts) for making it seem relatively new in the context of Minnie's story. Deservedly lauded at Sundance for its frankness and non-judgemental approach to female and young-adult sexuality, the film impresses on its own terms as a solidly-constructed character study of a mercurial, still-forming artist, told with a straight face despite the period eccentricities.

Like Gloeckner's book, the film picks up with Minnie at 15, straddling the edge of adulthood and similarly caught between seeing art as a hobby and as a profession. Minnie begins to cultivate her sexual appetite after losing her virginity to moustachioed 35-year-old scoundrel Monroe (Alexander Skarsgård), occasional boyfriend to her aloof, bohemian mother, Charlotte (Kirsten Wiig). She's also at a formal crossroads, documenting her experiences in intimate audio recordings--which double, in a mostly effective manner, as her voiceover--while tipping her toes into comics after seeing underground cartoonist and editor Aline Kominsky at a book signing.

Light on plot, save for Minnie's toxic relationship with Monroe and subsequent experimentation with more age-adjacent boys (and girls), The Diary of a Teenage Girl's success rests largely on Powley's performance--a gamble that pays off pretty nicely. Powley is fresh and unmannered as a rare character type for American cinema: a confidant, sexually adventurous young woman who isn't punished for her choices or treated as especially transgressive because of them. Powley's Minnie is an outlier in a puritan indie tradition that prefers to think of sexual development in terms of quirky males growing into their bodies. Minnie, by contrast, is relatively self-possessed, an American cousin to self-cultivating French heroines like À nos amours' Suzanne. While this characterization of Minnie's self-determination comes at the expense of a clear-eyed indictment of the exploitative Monroe (about whom the words "statutory rape" are never uttered), it's refreshing all the same, an interesting blip in a field that's otherwise dominated by twee stories about awkward young men.

Though its point-of-view is distinct, the movie suffers a little from its stylistic affectations--chief among them the incorporation of cheeky animation into live-action shots as a way of bringing Gloeckner's text into the real world. That's a curious decision, seemingly made more for indie audiences who've grown accustomed to cute nods to comics in earlier adaptations like American Splendor than as a means of expressing either Minnie's or Gloeckner's artistic sensibilities. Gloeckner, after all, worked in a sequential narrative form (here glimpsed briefly as Minnie maps out the panels of her first one-page comic) that isn't quite captured by the moving film image, and one wonders if her art is best served by prosaic images of flowers blooming around Minnie in her bathtub to signify her sexual awakening.

Confused as it might be in its representation of Minnie's art shading into her everyday life, as a portrait of a burgeoning cartoonist who's beginning to think of herself as a public artist, The Diary of a Teenage Girl is savvy and progressive. Heller is wise not to take up too much screenplay real estate explaining that Minnie's audio diary is the early foundation for her comics; the overlapping sensibilities come through without unnecessary annotation in the brief glimpses of her work that we see. And though the film's final stretch is a bit bumpy, saddling Minnie with a lighter version of Michael Fassbender's descent into depravity in Shame, there's real emotional weight and sensitivity in the coda's focus on her newfound sense of herself as someone who can parlay her technical skills--as well as her experiences--into a career selling her art, one zine at a time.