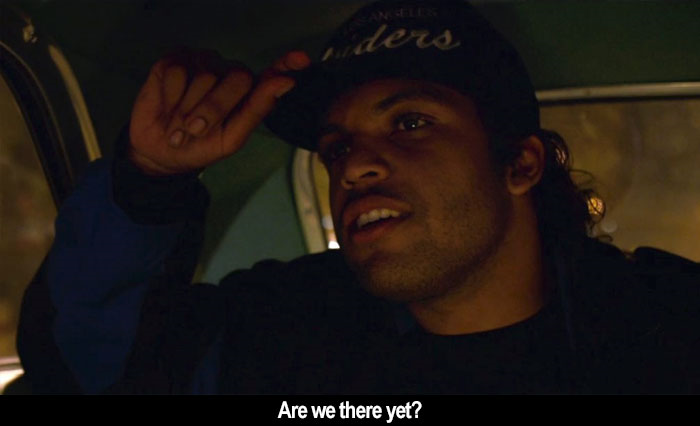 by Walter Chaw Exhilarating until it turns into a "Behind the Music" special, F. Gary Gray's N.W.A. biopic Straight Outta Compton (hereafter Compton) is most affecting for just how timely are its self-aggrandizing tales of police brutality and racial profiling. Amid a sequence that reprises the Rodney King tape, it occurred to me that we're talking about something that happened almost 25 years ago; all we've done in the time intervening is lengthen the list of martyrs and sites of atrocity. Progress that a movie that deals as directly as Compton does with race and the police exists in any form, I guess, but it's cold comfort in the face of what feels like a treadmill built on a Moebius strip. Call it a national farce and a tragedy that what is obviously an auto-mythology plays so much like objective, sober documentary and evening newscast. God bless America.

There's a sequence set during the Riots after the four policemen who beat King were acquitted that shows Compton heroes Dr. Dre (Corey Hawkins) and Ice Cube (Cube's own son, O'Shea Jackson Jr.) driving slowly through ground zero with ambivalent looks on their faces. I thought at that moment of a powerful scene earlier in the film when N.W.A. are harassed by the LAPD while standing outside the Ruthless recording studios, run by unscrupulous Jerry Heller (Paul Giamatti). There, as the noble young musicians are herded back inside, one of the cops tells Cube to heed his master's call, "boy." Compton is at its absolute best when it's about race and class and what happens when success suddenly levels the field (and then what happens when that success fades). Smartly, it avoids offering solutions, and impossibly, it manages to not play into a martyr narrative. The band, responsible for the titular, groundbreaking album and the controversies that ensued for tracks like "Gangsta Gangsta" and, especially, "Fuck Tha Police," is a victim of their own youthful excesses and inexperience. They're preyed upon, it's true, but they prey upon each other as well, and in the film's unflattering, brutal portrayal of Death Row Records head Suge Knight (R. Marcos Taylor), it becomes clear that among N.W.A.'s legacies, the eruption of various violent factions in the rap genre is the most unfortunate.

For the first two hours of an unnecessarily-bloated 165-minute running time, Compton is rousing, inflammatory, absolutely contemporary, and the very evocation of N.W.A.'s landmark album. Its creation of a Compton in the mid-to-late-'80s is like the best Science Fiction. It's a J.G. Ballard landscape. A night on Crenshaw with rows of jacked-up cars. An exuberant concert at Skateland, U.S.A., where the crew land with the record company that recently scored a gold record with the California Raisins. An incident where bangers pull over a school bus and put a gun to a kid's head for playing at Crips and Bloods. I went into Compton thinking this wasn't my kind of movie (not my music, not my history), only to discover that I actually owned the major albums discussed therein--that N.W.A.'s influence was such that it transcended genre and class and indeed dominated the cultural conversation. When Dr. Dre brings in Snoop (Keith Stanfield) to record the title track to Bill Duke's fantastic Deep Cover, I was startled to recognize that Compton is also the best science-fiction in the sense that it presents an experience that appears at first glance to be alien as current, familiar, pointed, important.

Compton hits its apex during the tour supporting "Straight Outta Compton". The excess, the breathless hedonism and criminality, all coming to a head one night in Detroit as the police actually raid the concert and drag the band members off in the back of a paddy wagon. It's the sequence with the most ambiguity, the most energy, and the most promise that there could be change in the larger discourse, given that at least half the audience at any N.W.A. gig was made up of yuppie milquetoast whitebread rebel. It's the sequence, too, most tinged with melancholy, as we're armed with the knowledge that not only will the band never again reach this level of crossover relevance, but also that issues of police brutality and this country's racial division have yet to be resolved and probably never will be. All that's left is the worrying over contracts, the bankruptcies, the fights, and the jail time (though the worst moments for our heroes in real life are largely left out), plus the death of founding member Eazy-E (Jason Mitchell) not in a blaze of glory, but to a wasting disease--the punishment for a life lived incautiously. Energy flags; the pioneering efforts get absorbed into the ruling culture. Compton's is not an inaccurate ending--more a trailing-off than an ending, really--but what began as a rallying cry wraps up as a nostalgia piece. If that speaks to the acculturation of a group once audacious enough to dub itself "Niggaz Wit Attitudes," more's the pity. Well. It was great while it lasted.