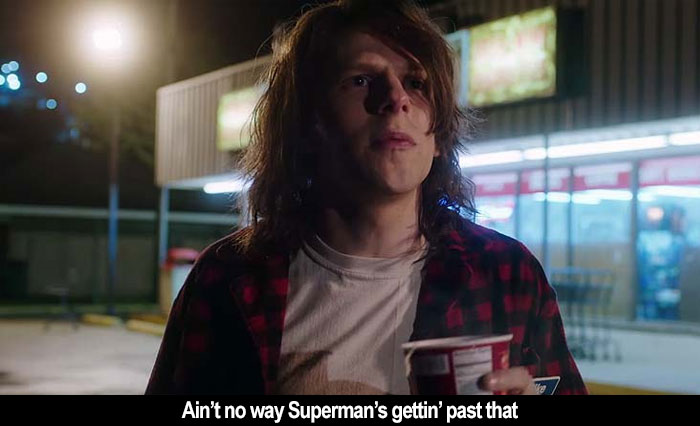 by Walter Chaw A lot of thoughts crossed my mind during the Max Landis-scripted, Nima Nourizadeh-directed American Ultra, most of them having something to do with trying to figure out in which movie I'd seen something before. I also spent some time thinking that if this thing were made in the early-'90s, like it seems like it could have been or at least wants to have been, that it would have starred Drew Barrymore and James LeGros. Because I'm 42 and grew up in an era loving movies that were not very good but were very violent and had the sort of appeal that would make me want a poster for Guncrazy twenty-five years later, I'm still working through whether or not that's a recommendation.

Jesse Eisenberg's convenience-store burnout Mike is on the verge of proposing to his stoner girlfriend Phoebe (Kirsten Stewart, typecast) with a trunkful of illegal fireworks (Chekhov's Gun alert) recently procured from John Leguizamo-type Chulo Rose (John Leguizamo). Little does Mike know that he's a deep-cover, Jason Bourne killer-guy who doesn't remember who he is before being activated, Manchurian Candidate-style. His activator is a spook played by Connie Britton, so it's not all bad. On the other hand, the evil bureaucrat wanting him dead is Topher Grace, so it's still pretty bad. Soon, lots of jackbooted Universal Soldiers come after Mike and Phoebe (I'm guessing a "Friends" reference?), causing lots of Grosse Pointe Blank-mayhem in suburban surroundings, including a Cobra shootout in a grocery store.

Destined to be misidentified as one of those drug comedies akin to the Friday or Harold & Kumar sagas, American Ultra is instead a member of a newly-minted hipster genre born of young, rich, white guys of a certain age and background making movies entirely dependent on the culture of their childhood. This is one thing when it's the Film Brats of the 1970s; it's something else altogether when it's the offspring of those guys. What's worrisome isn't that American Ultra is wildly and stupefyingly derivative, no--what's worrisome is that it's imitation without analysis. This is essentially Career Opportunities with the addition of explosions and extreme violence--a decrepit formula vehicle like Eve of Destruction, maybe, that's fun to namedrop in certain circles (professing ignorance towards it is good as proof of squareness), but is otherwise mainly useful as totem. Yes, you've misspent many hours watching obscure trash--it doesn't make you Tarantino unless you understand what you're seeing and, crucially, why it's cool.

Eisenberg's fine-tuned autism, which played so well in The Social Network, tends to grate in a film featuring jokes like one character asking incredulously, "You don't actually think he's so stupid as to go back home?" followed by a smash cut to another character saying, "I can't believe you're just going to go home!" It's so garage-band regressive that it's almost charming. Like the part, trailer-spoiled, where Mike ricochets a bullet off a cast-iron skillet and comments, without irony, "Hey, it's the ol' frying-pan bullet trick..." It's douchebag sitcom writing matched uneasily with "cool" action sequences. The nadir is the moment when Mike finally manages to propose to Phoebe in a tableau directly lifted from Natural Born Killers. In tone, compare it to the scene where Forrest pushes Lt. Dan through Times Square to the Midnight Cowboy theme: I understand the reference you're making, but do you? American Ultra is smug crap like The Boondock Saints. It's a lot like Joe Lynch's Everly (just like, actually), or Drew Goddard's equally-terrible The Cabin in the Woods. Less film than affectation, American Ultra is a series of high concepts strung together with specious concepts of cool and current. It's the movie version of skinny jeans and too much knowledge of craft beers.