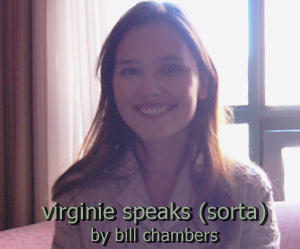 September 15, 2003|Gallic ingenue Virginie Ledoyen strides confidently into the room, and the second she spots me we say a grinny "Hi!" in unison. Alas, the communication breakdown commences shortly thereafter: I was diagnosed with a swollen eardrum a few days before, and I lead our interview with a pre-emptive apology for any struggle I might encounter trying to hear her, which I think--combined with my being her last in a morning brimming over with interviews and the usual language-barrier issues--caused her to be a tad...brusque in her responses.

Unfortunately for you, who will only know this abridged transcript of her words, Ms. Ledoyen's body language held a lot of intrigue. Less childlike than the person you see on screen, the former model (who remains a spokeswoman for L'Oreal) sits down, stands up, and smiles for the lens with knee-jerk poise. But there lay in her gestures the tiniest shred of self-consciousness, for like Camille, her character in Bon Voyage (the film she was at the Toronto International Film Festival to promote), she preferred to be committed to memory sans glasses, shedding a flattering pair of black-rim specs as soon as I unsheathed my camera. I began our conversation by wishing her not-present daughter Lilas, who will be two at the end of September, a happy birthday--a gesture I instantly regret, because it feels a tad overfamiliar.

FILM FREAK CENTRAL: How has motherhood altered your career?
VIRGINIE LEDOYEN: It's hard to describe. It's true that, especially when they're a baby, and later, when they start walking and talking, you want to spend a lot of time with them.

So it's made you want to work less?
No. Well, it depends--when you're doing your promotions, you're planning a little bit more carefully than you used to.

Bon Voyage just won Jean-Paul Rappeneau a Best Director award at the Cabourg Romantic Film Festival, yet I'd be hard-pressed to give the film a genre label. What appealed to you about the project?
Many things. Firstly, I've really wanted to work with Jean-Paul for a long time, because I think he's a great, great director. And when I received the script, I was so entranced by the story because it's a mixture of many things. It's a drama, it's a comedy, it's an adventure. It's a human drama, too. And my character, I liked the fact that she's brave, she has so much energy.

The chance to work with Jean-Paul Rappeneau is a rare one--he doesn't direct often. What was he like?
He's very particular, he knows exactly what he wants, he's very careful with lines. He's very precise...

There's a motif in the film where you slip off your glasses every time the main character is nearby. It's a nice way to convey your attraction to him, and I'm just wondering if it was scripted.
It was [written into] the script, actually. Because I wear glasses, I think Jean-Paul saw that and thought it would be funny when she wanted to seduce him a little bit, she takes off her glasses.

What specific challenges did playing Camille present?
The challenge for me was that... She's a tomgirl, she's a nerd. She'd be spying all the time, we had to be very careful, because she had to be charming, too. We had to be careful about not making her arrogant.

What sort of preparation do you normally do for a role?
It depends on the part. Jean-Paul didn't want so much preparation for that, simply because he didn't want to rehearse the movie. It depends what the director wants, sometimes they want to rehearse, sometimes he doesn't want it. I did a movie where I had to be a maid--in room service, so I went to a hotel and tried to figure out how things work there. Very dependent on the character.

One of the conceits of Bon Voyage is to have conversations take place on camera but unheard by the audience. What did you whisper to Gregori Derangere on the staircase?
We were talking about heavy water.

So you made stuff up that stuck to the plot?
Mm-hm.

I'm curious as to whether or not it's coincidence that you haven't made an American film since The Beach, which by most accounts was a troubled shoot.
The thing is, when I did The Beach, I was very happy to do it, I really liked the movie. But I was living in France, and it wasn't like I was waiting to do an American movie, to forget about French movies. I received a wonderful proposition from Hollywood, and I liked the director they had hired (Danny Boyle -Ed.), but I didn't feel like, "Oh great, I did an American movie and now I'm gonna let France go." I'm an actress, and I want to work in projects that I like, that delight me. The projects that excited me at that time were French instead of American.

A lot of Europeans do one American film and then get swallowed up by Hollywood.
Exactly... I'm not upset at all about it, I love what I'm doing.

Why have you tended towards ensemble films recently? You seemed to have more leading roles when you were starting out.
No, well, 8 Women, I just wanted to do it, and when Jean-Paul Rappeneau came along, I just wanted to do it. And now I just finished a movie (St. Ange -Ed.) a month ago with the lead part. I just want to do something that I like and wanna do and I don't... (pause)

It sounds like the director is a primary consideration when you're choosing a project.
(emphatic) Yeah.

Outside of acting in them, are you a film lover? France is such a rich film culture.
Yeah, I love movies.

You started out as a model, but did you always want to be an actress?
Yeah, I really wanted to be an actress. [Movies] were magic for me, even now I love many different kinds of movies.

Anyone you're dying to work with?
Tarantino. Woody Allen. Many.

You were nominated for Most Promising Young Actress three times between 1994 and 1999 at the Caesar Awards. By the third time, does it start to seem like a backhanded compliment?
It was definitely something I don't care about. I mean, I was very happy to be nominated, because it's a recognition of your work. But it's so weird, you know, it's five actresses, four actresses, in four different parts, it's bizarre--I think. But to be part of the party is good.

Ten years ago you were just coming into your own as an actress. Where do you see yourself ten years from now?
I don't know. I hope I keep getting to do things that I really love, and just being happy. Right now I don't feel like doing anything but acting, I really love being an actress.