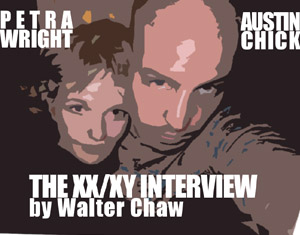 March 23, 2003|I met Austin Chick during a Critic's Reception at Denver's Pinnacle Club, a swank spot perched on the 38th floor of the Qwest building with panoramic views of the front-range. Compact and friendly, Chick has a firm handshake and a spare New Hampshire accent; I was glad of this encounter later because, when my scheduled interview proper with Chick rolled around, a blowhard of a local reporter decided to take it upon himself to redefine sycophancy for about ten minutes of my allotted time. In my cocktail party interplay, however, I learned of Chick's initial desire to shoot in DV before receiving a 35mm camera from a kind studio benefactor; that he came to be familiar with Mark Ruffalo through seeing him in a Kenneth Lonergan play; and that he is in the process of developing two projects, one as a director for a major studio.

Mr. Chick's first film is XX/XY, an extremely well- written and directed debut that, unfortunately, seems to be missing a story arc. Without true character evolution, the film is two acts driven by the same plot points. All the same, it's a promising work that demonstrates a good deal of potential for not only Chick, but also his young cast. Meeting Chick and XX/XY actress Petra Wright in a suite at the Hotel Monaco, I asked how Petra came to Austin's attention:

AUSTIN CHICK: My cinematographer Uta Briesewitz had just completed a film with Petra (Seven and a Match -Ed.) and also Alan Parks, who did the casting for XX/XY, had cast that other film as well so that she came pretty highly recommended.
PETRA WRIGHT: We first met at the audition, though.

FILM FREAK CENTRAL: What was the writing group that you were involved in, Mr. Chick?
AC: It was a very informal group of writers that I was very fortunate to fall into--friends of friends and things like that. I met Matthew Weiss, who's an amazing playwright and screenwriter, through my good friend Kitty, so there were a lot of wonderful folks I got to know and bounce ideas off of. I realized pretty quickly that if I had aspirations to become a director the only way I was going to get a movie made is if I wrote it myself. Even though I think of myself more as a director than a writer, the script was the way to achieve that so I showed the piece to Matthew and he brought me into the workshop.

How much revision did your screenplay undergo?
AC: There were some things that changed during rehearsal--we had a few days which was rare for a film of this size and budget, and there were a couple of different manifestations that the ending took in particular. The ending that made it through to the final edit is one that evolved through conversations that I had with Petra, in fact, when I was casting the movie and she had auditioned for the part of Claire. Originally we had the ending in a restaurant and though part of the decision to change it was fuelled by economics--we just couldn't afford to rent out another location, frankly--a big part of it was we decided that we wanted something a little quieter.

Tell me about the importance of Claire Denis in your film.
AC: She's a part of a new generation of French filmmakers that I really admire. When I sat down to write this I had already thought about what kind of movie it would make sense to shoot in DV. My goal, of course, was just to get my first movie made, y'know, and as a first-time filmmaker, knowing that the task before me was Herculean, I wanted, if necessary, to be able to shoot a movie with almost no money. So I needed an intimate story about people and relationships, hence DV and close-ups. As it was, we were able to get 35mm, but there was that intimacy I wanted and Denis and her contemporaries--I really liked their intimate films. Those and other films from the early Seventies--Carnal Knowledge and Bob & Carol & Ted & Alice--really were my influences.

What were the visual and thematic philosophies behind splitting XX/XY in two parts?
AC: Well, we shot chronologically and I'd always imagined that the first half would have more of a claustrophobic feeling. In addition to those French films, my DP and I had watched an early Wong Kar Wai film called Days of Being Wild--a beautiful, quiet movie--and we'd spent a lot of time with colour and composition and so decided that we'd shoot the first half sort of gritty. We worked a lot with blue--then green--lit a lot with untimed fluorescents. That bathroom scene, we made the light even greener--really tried to bleach out the colours. The second half opens up partly because of the way we wanted to shoot it and partly because the characters' lives are now decorated by Pottery Barn. Everything's beige, and grey, and muted--so at that point it made sense to open it up.

There aren't many establishing shots in your film.
AC: Not really, no, and not many wide shots, either. The wide shots that there are appear almost all in the second half and that came as a result, mostly, of confidence with the idea of and fact of the 35mm format.

The pivotal moment on the pier between Petra and Mark is a wide-shot. How many takes?
PW: I don't really remember, when I do it I tend to go under a little, y'know.
AC: That scene was shot over the course of two days.
PW: That's right, that's right. Oh God, I'm remembering.
AC: We had a really tight schedule--even with the free camera, I mean, we just didn't have much time in our shooting schedule and no money. We were supposed to shoot all of that beach stuff in about three days so we drove out to Shelter Island, all the way out Long Island then a ferry, and we've got this crew and these trucks and we were supposed to be out there early enough to shoot half the day, so we get out there and half the crew has gotten lost and I finally track down the actors and they're in a bar.
PW: (nervous laughter)
AC: And I was like "What the fuck is going on?" They're there having a drink. David Thornton had that idea, I think, Hey let's just stop and have a drink--so we decided at that point that we're losing the light, the sun is going down, let's just see what we can get. So we throw everything together and it was like, "Okay, Petra, 1, 2, 3, act." It was really, really rushed and we didn't know if we had it, and it's such an important scene...
PW: I wanted to jump off that pier, it was really awful.
AC: So we re-shot it the next day. 90% of that scene we finally used was shot the second day so it was the right decision to do it again--but there are two shots if you care to look closely at them--where there's a boat over Petra's shoulder that are from the night before.

I feel like Petra's character is a key in some way to XX/XY.
AC: Petra's character, I think, is an answer to a question that the first half poses. I'll be the first to admit that the first half of the picture is really difficult--it's tough to watch, it's challenging, it's not plot-driven, the characters' motivations aren't clear. They're mean and self-serving and you don't really have a sense of where they're going. And if you make it through that, I think that the second half justifies it--Claire is the moral anchor of the film without, hopefully, being heavy-handed or preachy about it. I didn't want it broken down into a morality tale, but I do think that there are questions about choice that are raised and I hope that the Claire character, by the process of her maturation, is one answer.
PW: More than consequences and judging, it's important I think that they carry their weight and have their own meaning in that time and later. Every relationship is a negotiation and compromise is an important part of any negotiation, and I think ultimately that's what the movie is about and why so many people have had a connection with it.