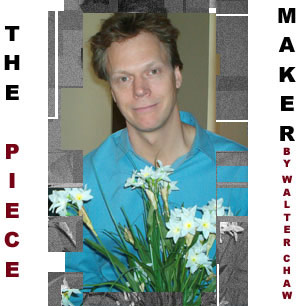 November 9, 2003|It's one of the horrible ironies of the profession that often the people I like the most during the interview process are the ones who have made the films I find significantly problematic. By writing a review before interviewing someone for the first time, I can safeguard against the tendency to reward, or punish, the film for my relationship with my subjects; if I had my druthers, after meeting Peter Hedges, writer-director of Pieces of April, I would have declined to comment on his film. See, with my wife going into false labour, I stood Mr. Hedges up, but he agreed to reschedule, greeting me with words of encouragement about my impending fatherhood and then, as we were packing up, commiserating with me about the pain of losing a parent. In between, I broached the topic of race in his film, the element of Pieces of April that causes me the most pause, knowing as I did so that Mr. Hedges was probably mistaking our affinity for one another for affection for his film. It's a hard job sometimes, and while I'm under no illusions that I'm friends with, or run in the same circles as, the people with whom I occasionally rub elbows, it still pains me to think that I might wound someone I genuinely like with a review that's more criticism than congratulation.

FILM FREAK CENTRAL: What did you study at the North Carolina School of the Arts?
PETER HEDGES: Acting. I never thought I would be a writer, I was gonna be Leonardo DiCaprio or John Malkovich. I wanted to be an actor more than anything. I did everything I could to be an actor--honestly, in retrospect, I don't know another kid who worked harder to be an actor than me. But in college it seemed the harder I worked, the better everybody else got and it was out of that, the fact that I put everything toward acting, that when it started not to work out that I got very worried. Worried that I'd made a very big mistake with my life, and the way that I got saved was I saw my friends struggling and so I wrote a play for them to highlight their strengths. I noticed that students did their best work in student-directed or student-created productions.

Why is that?
I think it's because it's more free. They weren't so worried about pleasing their teacher.

Or honouring some legacy.
Right, no that's exactly right. So I wrote this little play and it had an impact that my acting never had, so, I'm glad I went to school, but I left it with a much different idea about my life than when I started. I started The Edge theatre in New York with Mary Louise Parker and Joe Mantella, a Tony Award-winning theatre, and I wrote many of my early plays for them and other friends I went to college with. I started to write, at this time, what I thought was going to be a play called "Other Grapes" about a family that would take place all on a porch in Iowa. What I discovered was that I was really only interested in one character's voice, Gilbert Grape's voice, and so I ended up with a five hundred double-spaced pages monologue that I wrote, essentially, by reading to people. Whenever I had people over for dinner, I'd read them sections of this monologue and I could tell by that feedback what worked and what didn't. It took years. I essentially wrote What's Eating Gilbert Grape? orally, created it much in the way that you create a theatre piece.

And you found yourself liking the novel form?
I liked it so much. I liked that it could defy any one theatre critic, that I could find an audience even if the critic in the NEW YORK TIMES hated it. I wrote a second novel that took me many years, and now I'm almost finished with another novel, my third novel, which has also taken me many years.

Title?
No, I don't tell it and I'll tell you why, An Ocean in Iowa began its life as "Seven" and for years I'd been telling press that it was called "Seven" and then, right before it came out, a movie came out with that same title. And I just decided that it was too exhausting to change titles at the last minute. It's a novel about marriage, a midlife novel, one that I couldn't have written five or ten years ago and one that I couldn't write in five or ten years.

The reason I ask is that all your titles seem plays on words--are you concerned with a surplus of cleverness?
Sometimes I do worry that it's too clever, but I do like titles that mean many things. In my new book, it too has a title that could mean a number of things. Even About a Boy, which I didn't write (Hedges adapted Nick Hornby's novel for the screen the screen -Ed.), has a dual meaning. I'm just drawn to that, I guess--I mean what drew me to that was this idea of a boy who's grown up too fast and lost his childhood, and a man who's never grown up. How the man tries to teach the boy to be a boy and in the process grows up--and we have this generation, my generation, arrested in time. It seemed like a good topical thing for the time--same thing with A Map of the World, with a marriage enduring the unthinkable.

Can you clarify your worry about over-cleverness?
I would say I'm more worried about it now after 9/11. I made a decision years ago. I had two theatrical experiences back-to-back--I went to see Tom Stoppard's "Arcadia" and it's an impenetrable play. I think I'm a rather bright person and I had no idea what was going on. I felt I'd paid a lot of money to be utterly confused for several hours. Where many people around me screamed "brilliant" I felt not duped, but demeaned in a way. And the next night I saw a not-so-great revival of "The Glass Menagerie" and I closed my eyes and listened to the words. I thought to myself, "Here is a play that is completely accessible--my grandmother, were she alive, could understand the story. And every word is poetry." It occurred to me that it's possible to tell a story that is accessible, and elevated, and art. I don't think I've achieved that, but I very much want to guard against cleverness, especially if it's my own cleverness... It's that teenage kid you knew who liked to show off his smarts. It's enjoyable on a level, you know, but ultimately it feels young and show-offy. I like direction that is simple, stories that are easy to understand if hard to handle. I don't want to be the McDonald's of storytelling, but I think a story can be told sincerely and directly--that the mystery of the experience need not be the unravelling of story but of what the story does to you.

And what does 9/11 have to do with that?
Well, everything that I've written after that day... Well, I looked at everything that I'd written and I wondered, Why all this irony-drenched post-modern angst? I'm all for darkness, all for that in a way, but cleverness. I don't have time for that anymore--I want sincerity. I want stories that are more similar. You have tales that are about fracture, but the story of this movie, I wanted there to be a simplicity about it. 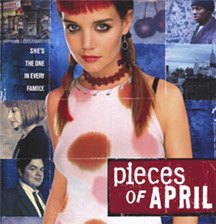 "...I'd been feeling very white. I've lived in New York for twenty years and all I've been writing are white people living in Iowa."

What is it about the recurrence of disenfranchised children and broken families in your films?
I dunno. I look at my body of work a bit differently probably because there's a whole chunk of my work that nobody knows. Obviously, the best known of my work has been What's Eating Gilbert Grape?, maybe About a Boy, and, hopefully now, Pieces of April. The thing about Pieces of April is that it's not so much about the family being reunified--my entrée into the story was April engaging people with different languages and histories. That's what really grabbed me about this story, but it seemed to bring along with it these recurrent issues.

Your training in the theatre would indicate a lot of sources for these concerns, as well...
Right, right, Tennessee Williams and O'Neill, Arthur Miller--they write their families, though, and I didn't do that for Gilbert Grape and I didn't do that for April. I didn't write my family for An Ocean in Iowa, but I certainly wrote myself as a young boy--at least as close to me as I could get. You know, I find writing too close to myself leads to a sort of creative paralysis. It's too grey. It gets too muddled with what happened, where the imagined story can compel me to get to more surprising places. In some respects, the working experience feels purer, clearer, and ultimately more powerful because it's made up. Wish fulfillment, cautionary tale, oh-my-god this could happen--it's that activation that occurs when an imagined circumstance, repeated back to me by myself. What if this girl can't cook the turkey, what if the mother doesn't want to go to the meal--it's jumping from that place that, because it's not my life, I feel I'm more able to inhabit it with freedom and vigour.

So you don't cotton to the idea of writing as therapy?
I think that writing can be therapeutic, ultimately it is therapeutic, but if I need therapy, I'll go to a therapist. I feel when someone's written something that is primarily for therapeutic reasons that I can smell it. This isn't about the story, this is about them purging themselves. It's self-indulgent. That's not to say that I won't write a memoir someday, just that I don't have any kind of interest in that at this point in my life.

The issues of race and racism are addressed in Pieces of April--I was uncomfortable with it. Can you talk to me about your thinking behind its inclusion?
Look, I'd been feeling very white. I've lived in New York for twenty years and all I've been writing are white people living in Iowa.

And adaptations of work that are pretty much all-white as well.
Right, but those are jobs I do so that I can spend seven years writing a novel or go off and write the occasional play. I very much set out, you know, to put myself in situations where I could write people who came from various places--people who didn't look like each other. When I heard this idea about this broken oven and a group of young people trying to cook their turkey, I knew that was my way in, I just didn't know how or why. It took me years to find out. I very much wanted Bobby to either be African-American, Chinese, Hispanic--an opposite to April, if that is the pure opposite to Caucasian. But I wanted it to never be an issue. Not even for the family when they arrived, I didn't want the big conversation. It's possible--it's unlikely, it doesn't happen a lot, but it could happen that April finds love in a guy like Bobby and that's why when people say to me that this film feels a lot like my other stuff, I say it feels new, too. It's me, but I'm evolving. I'm always looking for ways to tell stories now about how to throw different cultures together. If that can happen then movies become that model of possibility.