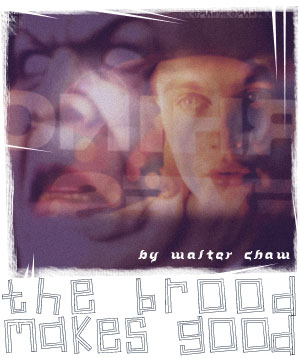 October 5, 2003|Madstone Theaters has a workshop that pays aspiring filmmakers a salary, complete with retirement plan, for two years with the hope that at the end of their tenure, they will have produced a script that can flower into a feature-length film. Something that's ambitious and noble in a climate dominated by boutique moviehouses preaching indie while stroking mainstream, Madstone's fledgling community of filmmakers seems suspiciously Zoetrope-ian in its mandate--and the first product, Aaron Woodley's Rhinoceros Eyes, is so assured and engaging that it feels like a revelation. For its humour, and its faithfulness to the darker aspects of the quixotic fairytale dreamscapes of The Brothers Quay and their winsome heroes, Rhinoceros Eyes is a stupendous debut, mirroring the freshman amazement of Richard Kelly's Donnie Darko (if truthfully in no other substantive way) and establishing both Woodley as a talent to watch and Madstone as having vision and integrity.

After landing the coveted "Discovery" award at this year's Toronto International Film Festival and being courted by distributors at a loss as to how, exactly, one goes about marketing a surreal, funhouse black comedy anymore, Aaron Woodley spoke to us by telephone fresh from an animating session on a new project while planning his sophomore feature, Blueberries. The nephew of David Cronenberg and a veteran of almost two-dozen animated shorts, Woodley is soft-spoken and intelligent (like his uncle), and, like his uncle again, gifted and dangerous.

FILM FREAK CENTRAL: Tell me about the significance of Tor Johnson to you.
AARON WOODLEY: Basically that's one of those images I remember from my childhood because it was that face, that Tor Johnson mask, that was in the back of every comic book like those X-ray specs. I used to collect comic books and that mask was in there all the time and it sort of fascinated and terrified me. I didn't know who it was, or whatever, but it really made an indelible mark. Whenever I think of a popular movie mask, it's that one that pops into my head. Beyond that, there's this expression the mask has: absolutely horrified by everything it saw, but also absolutely fascinated, y'know--there's this childlike quality to it that fit in perfectly with some of the things I was trying to do with the picture. It's this kind of grotesque baby-man--the whole thing was extremely disturbing to me and I just thought that this was the perfect alter ego for [Michael Pitt's] Chep.

Which comics?
Marvel, y'know, DC--mainly that. I loved "Man-Thing" and "X-Men", the usual stuff.

When I saw the Tor Johnson mask, I was really reminded of Tim Burton and Ed Wood.
(laughs) I really love Tim Burton, that's cool. He started as an animator, too, with Disney right?

Right--then he did Vincent and Frankenweenie and enough was enough.
(laughs)

Tell me about your tutelage under animator Eugene Federenko.
I took a class from him at the Art Gallery of Ontario when I was seven and I continued to study under him at his house--sort of moved the class from the gallery to there. It was basically weekends, year-round, until I was fourteen. I made a bunch of animated films there with this recurring theme of the main character being eaten by appliances, laundry baskets, the toilet, y'know. Thirty-second shorts. Says something, I think. (laughs) I did branch out now and again, though: there was one about time travel and there were always a lot of demons, devils and wraiths and nightmares and things.

There seems to be a fear of consumption in Rhinoceros Eyes, too, where film is the consumer.
Definitely, absolutely. At a certain point, and I scrapped this idea, I wanted Chep to know that he was in a movie--that he'd look down and see mark tape, that his wardrobe would change from scene to scene out of narrative continuity, a Peter Greenaway sort of thing. It would have added a whole meta-level to the consuming quality of cinema, but cooler heads prevailed and I ended up trying to express that with scenes of Chep walking the streets, eating popcorn, and watching the "films" of people in their apartments.

A voyeuristic quality suggested by your film's title.
I started writing the film about seven years ago and we kicked around quite a few titles that just didn't capture everything. Originally I wanted to call it "Planet X"--that the movie theatre in the film would be called that so that furthers the suggestion of reality layering--and of course there's that B-movie quality to the title that would've been in keeping with the Tor Johnson mask. Eventually though, that point-of-view element was what I zeroed in on, that childlike perspective for Chep and his living in the prop house is really a womb-like environment and so when he leaves, he's finally born. So he's seeing through these innocent eyes.

The picture seems almost autobiographical in the sense that your introduction into film was a visit to your uncle's The Brood set and you've been swallowed whole ever since.
(laughs) Yeah, I wanted to be one of the evil children, but when push came to shove, I was terrified--scared the hell out of me. They tried to glue a mask to my face and I wasn't having any of it, I just bawled. But David really wanted me to be in it so he got me to lie face down when the little spawn were all dead, so I didn't have to wear the mask--I had white blonde hair at the time so I didn't even have to wear a wig. (laughs) I've been dropping by his sets every now and again, and I was an apprentice editor on Crash. As to it being autobiographical, y'know, I was a lot like Chep in that I wasn't ready to grow up for a long, long time--that cloudy haze took a long time to blow off.

The conclusion seems an escape from the cinema.
There's that, but it's also a growth thing--the little boy growing up beyond the innocence of early childhood, that hazy curtain that kids see through, the blurred line between reality and fantasy. Cinema and the imagination collide to become this safe, nice place to be. I mean, really, who wants to join the outside world that is so dangerous and more bizarre. For Chep, the struggle was to become just bizarre enough to exist in the outside world.

The animated sequences and the use of them within a somewhat traditional narrative reminded me first of The Brothers Quay, then of Jan Svankmajer.
They're both extremely influential to me, extremely influential. I've been animating for a long time and I saw their stuff in film school and it was like, "There, that's it, that's the stuff"--I just adore these guys. I loaned Michael Pitt this tape of The Brothers Quay that I'd made. He couldn't visualize what the animated sequences were to look like, and he asked me about it and I loaned him the tape of The Brothers Quay and Svankmajer's Alice, and it blew his mind. He wouldn't give me the tape back and he took it to Paris where he was shooting with Bernardo Bertolucci and he showed the tape to Bertolucci and Bertolucci had never seen The Brothers Quay. And the fucking guy won't give me the tape back (laughs)--isn't that cool? I couldn't believe it. I never in my wildest dreams would have thought that this little hand-written tape that I'd made would end up in Bernardo Bertolucci's private library. (laughs)

Did you like Little Otik?
I really liked Alice and I love his visual style, of course, but I think he's sometimes a little slow. There's no denying that there's something about the affect of human touch on animation--you can never replace that element of life.

Let's talk a little about Dragonslayer.
It's one of my all-time movies, I'd love to compare it to Jurassic Park to see how it matches up. To see which is superior.

It's not as compromising.
Right, what an amazing thing to say about this little movie that it seems like nobody really saw, but it was one of the forming movies of my life--the "go-motion" technique that they use in there, that dragon is about as good as it got. They did a test with it for Jurassic Park before going with CG--but I think that Dragonslayer was the only feature-length picture that used it. It's breathtaking.

John Cale gets a score credit.
I don't know how much I want to say about the John Cale thing--I mean, The Velvet Underground was just (laughs), seminal, y'know, so I was over the moon to get to work with him--to meet him--and then there I was in the studio actually collaborating and I had to pinch myself. I couldn't even talk to him at first. But anyway, we ended up not hitting the mark and I couldn't believe that I was saying that, so my brother [E.C. Woodley] ended up replacing about 90% of it and he got it beautifully right. It was a lot of source music from old movies that were sampled and mixed with new musicians and compositions. It was more a less a patchwork, but as the film moves on, hopefully, my intention was to have the music blend in a way that the narrative was beginning to gel. The score was really meant to reflect the dissociative quality of living in a moviehouse--cross times and places.

Veronica Verkely was your puppet-builder?
Right, I've worked with her a lot on some other projects, she's just wonderful. She built all the puppets and that wonderful doll house, and that lovely carousel that we open the movie with and close it with, too--the idea of it is that as Chep evolves towards escape the puppets that are his projections evolve. The fetus is the first, with the umbilicus, and then the crawling baby, and the boy, and so on until it's finally, literally, Chep. And what was interesting to me is that it's wrong in its advice most of the time.

Was the whole film planned as carefully as a metaphor?
I wrote close to a hundred drafts of this script, it was ridiculous. But the symmetry came along pretty late in the process--it was an attempt to draw parallels between Chep and his love interest, these two children living in their respective kingdoms. Obviously, the dollhouse represents this to Fran [played by Paige Turco], who she is and wishes to be--and in her job as set designer, all of her creations are extensions first of her dollhouse then of her interiors. Chep wants to bring these things to life for her, for everyone. Only the puppets were storyboarded, though.

Cronenberg expressed to me that he didn't like storyboards, either.
Eh, he's just lazy. (laughs)