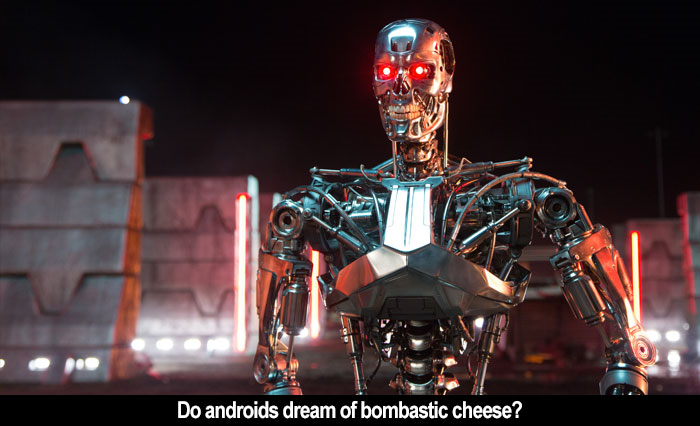 by Walter Chaw Once you come to terms with the fact that there's no internal logic to it (that it's without external logic is a given), once you've accepted that the only way to enjoy something like Terminator Genisys (hereafter T5) is at a great distance, through multiple irony filters and possibly a coma, T5 is still largely unwatchable. Its screenplay is one of those rare disasters generally reserved for a Syfy Channel Original, and indeed, the whole thing plays like the fourth sequel to Sharknado rather than the fourth sequel to James Cameron's The Terminator, which for some reason it replicates shot-for-shot in a series of 1984-set sequences. The premise, see, is that this time around, a Terminator has been sent for Sarah Connor (Emilia Clarke), mother of future resistance leader John Connor (Jason Clarke) and somewhere-in-time consort of heroic soldier Kyle Reese (Jai-Zzzzzzzzzz). What this means is that when Kyle gets sent back into the Cameron film, Sarah is already a badass, has a pet Terminator (Arnold Schwarzenegger) she calls "Pops," and has an adversary in a liquid T-1000 (Lee Byung-hun). I still don't understand how the T-1000 time travels because the rules in this universe are that nothing metal can go through the stargate without a flesh covering. Something else that doesn't make sense, T5 also has a call-out to Chris Marker's La Jetée.

Because Lee Byung-hun is one of the biggest stars on the planet, he gets about five minutes of screentime in this American production--which is a lot if you're not an evil scientist making dinosaurs, granted. And because it's the summer of 2015, T5 is another major motion picture dealing with artificial intelligence. Though "dealing with" is a term applied loosely in this instance to a project that spends a good half of its runtime trying to explain itself through stultifying monologues that fail to do so and stop the movie dead. To be fair, it's impossible to work through the picture's machinations--T5 is a puzzle with a third of its pieces missing. It's the worst mainstream film in that respect since Prometheus, meaning I have a pretty good idea that Damon Lindelof was brought on board at some point to "fix" the catastrophic script by Laeta Kalogridis and Patrick Lussier.

In just one of multiple instances of the screenplay giving up, John Connor declares the heroes of this iteration an island in time, immune to time travel conundrums; later, when the evil operating system intent on taking over the world (why? Because that's what AIs do, idiot) manipulates the Countdown Clock driving the third act, it handily displaces questions of continuity that have already proven too much for editor Roger Barton. Reading a list of Barton's credits, by the way, is a great pep-talk for anyone feeling like they can't get hired again after participating in one of the most artistically-bankrupt films of all time--or a dozen of them. Asking for an explanation, disgraced gumshoe O'Brien (J.K. Simmons--no, really) says that it all must be very complicated, to which Sarah responds, "We're trying to save the world." Which is, naturally, good enough for O'Brien.

The other thing you come to terms with watching T5 is that wanting to engage with it on any level is ill-advised and purely masturbatory. There's a moment where Pops recognizes his coming obsolescence that could possibly feed into a pretty interesting, Sylvester Stallone-ian introspection about aging and relevance--but then there's a coda where, in a legendarily-stupid film's stupidest moment, Pops announces that he's been upgraded. Yes, T5 is a father/daughter drama, a romance, an action flick, a time-travel sci-fi yarn, a post-apocalyptic war movie, a modern-day satire on our reliance on smart devices, and the worst, stalest example of all those things at once. The best performance in the entire benighted thing, and by a mile, is Arnie pretending to be a robot. Let that sit for a minute. Clarke is horrific. Jai Courtney is of course horrific. Other Clarke is horrific. At least there's consistency. The best line in the picture is the "I'll be back" catchphrase, because it's the only three words that make sense together. The best action sequence is...there are no good action sequences. Everything about this movie is bad. It's a monument to the bad idea, proof of the theory that as long as you're in the club in Hollywood, you can pile calamity upon trainwreck and see no diminution to your prospects. Movie jail, like real jail, only really applies to specific minorities and classes of offender. Go watch Edge of Tomorrow again--that film does what this one tries to do, effortlessly. Or just go watch the original Terminator again, which time is starting to show is the only genuinely good movie James Cameron ever made.