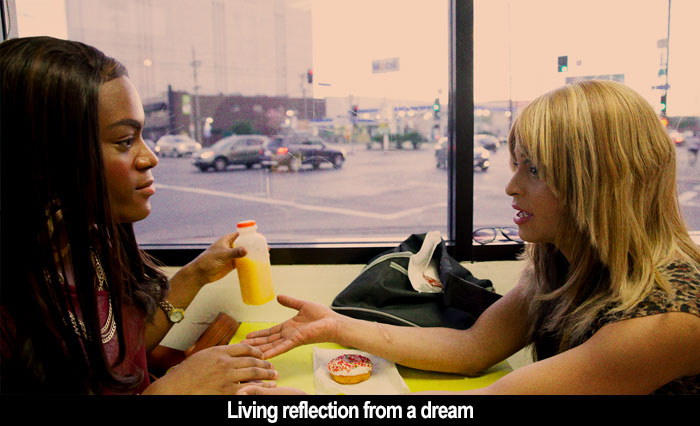 by Walter Chaw Tangerine acts like, sometimes even looks like, a Fassbinder film. It's a relational melodrama, a social allegory, an outsider text presented with seriousness and formalism that distinguishes itself with its energy and a willingness to address taboo unadorned. It's not a masterpiece, but it is a rarity: one of those glimpses into another culture obsessed with ordinariness, mendacity, and universality. Tangerine has the urgency of another generation's independent cinema. It doesn't play like a calling card, although there are moments, most of them coming in the final third of the film, arranged with a careful, painterly intentionality. The picture plays for all its narrative looseness (and then conveniences) like an opinion urgently held, urgently shared, but repeated so often that sometimes details are neglected in the retelling. It reminded me a lot of Nir Bergman's little-seen gem Broken Wings, which takes place in a very particular time and place (Haifa during the height of suicide bombings) yet is really just about a family. Broken Wings is not a masterpiece and neither is Tangerine, but both are important in the same way.

Tangerine is a quintessential Los Angeles film, almost as much as it's instantly the best comedy-drama we have about the transgender population. It's timely, I guess, with Caitlyn Jenner's emergence, suggesting a wave of acceptance embedded in a larger willingness to have this conversation and find the correct vocabulary. Sin Dee (Kitana Kiki Rodriguez) learns from her best friend Alexandra (Mya Taylor) that Sin Dee's fiancé/pimp Chester (James Ransone) has been cheating on her with some cis bitch. Thus launches Sin Dee's odyssey through the Angelino twilight in search of this home-wrecker while, parallel (and eventually perpendicular) to it, Armenian cabbie Razmuk (Karren Karagulian) is forced to come to terms with his own bisexuality, adultery, and difficulties accepting his responsibilities as a husband and father in a strange land. I like when he expels from his taxi two white guys puking all over the backseat and says, in disgust, "animals." I also like when he sits in a living room with a Christmas tree and director Sean Baker just lets him.

Tangerine was shot--notoriously, some would say--on an iPhone with an anamorphic attachment, but it isn't about that. It actually looks fantastic, though. The colours are lushly-saturated, almost like a three-strip process. Long tracking shots remind in the best way of Wong Kar-wai's similarly urgent (if freer, more dreamlike) odes to love and betrayal. Were a scene in a car-wash, filmed from the backseat as Alexandra receives fellatio, scored to some lonesome cello, it would be tough to distinguish Tangerine from the majority of Wong's oeuvre. But the picture is also funny; a subplot where Alexandra tries to get people to attend her performance at a quiet club is paid off with a genuinely well-timed, melancholic rim-shot. Tangerine at its worst feels like shouting and Three Stooges slapstick with a nasty undercurrent of violence--it's hard not to think of a moment where Alexandra prepares to fight a would-be John by saying she has "a dick, too" when Sin-Dee spends the middle portion of the film savaging Chester's small, blonde paramour. You could make a bigger political statement about the whole thing, but it feels like Baker was going for laughs and it leaves a bad taste. The movie is best when it finds a balance and defines in the process how desperately everyone wants to be accepted; to be thought beautiful and desirable; to be the centre of someone's attention. Tangerine is spirited stuff--an amateur production armed to the teeth with a point-of-view and, maybe more importantly, savvy enough to crest with history into the shore.