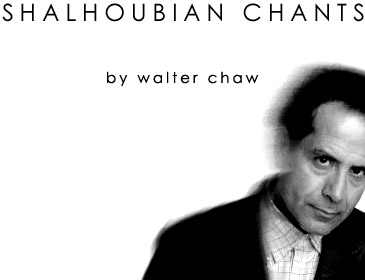 September 5, 2004|Poised on the eve of The Last Shot and the intriguing The Great New Wonderful, Tony Shalhoub had me a long time ago at his three minutes or so in Barton Fink. The best part of Galaxy Quest, playing the guy playing the ethnic guy in a "Star Trek"-like cult television series, Shalhoub also stole the show as fast-talking lawyer Freddy Riedenschneider in his reunion with the Coen Brothers, The Man Who Wasn't There; demonstrated uncommon intelligence and sensitivity in the still-underseen Big Night; and made his feature-film debut behind the camera with wife Brooke Adams in the independent Made-Up, now trickling into video stores. Shalhoub is an Emmy-winner, too, taking home a trophy for cable-series "Monk", which is winding down its third critically-acclaimed season.

But what interests me most about Mr. Shalhoub isn't his theatre presence, his television presence, or his movie presence, per se: it's his decisions to champion projects both risky and unusual. Sure, the abovementioned Big Night, about a pair of immigrant brothers (Shalhoub and co-director/co-writer Stanley Tucci) drowning in a failing business, was a risk, but how about his decision, as an Arab-American of Lebanese descent, to appear in the oft-reviled terrorism thriller The Siege? (A film that, in its attack on Arab fundamentalism, seems more prescient than politically incorrect these days.) Tireless, modest, soft-spoken, Mr. Shalhoub was a pleasure to speak with via telephone.

FILM FREAK CENTRAL: Tell me about the genesis of Big Night.
TONY SHALHOUB: Well, I met Campbell Scott while filming Longtime Companion, but before that I had done a play with Stanley Tucci, a John Guare play called "Moon Over Miami"--now titled "Moon Under Miami". Stanley and I were just New York actors, you know, kicking around the town--that's where I met Oliver Platt, as well. Oliver was a producer on Big Night. But Stanley and I got to know each other during that play and he asked me to do an early reading of Big Night just after he and his cousin had finished writing it. When I first did a table read of it, I did the part of Pascal, Ian Holm's part. You know, people believe that movies sprout out of nowhere, but that movie was five years of writing, peddling it around, getting it down, taking it to Sundance, looking for a distributor--it felt like an endless process.

I know that your father owned a small business--can you talk about the bleed-through between your personal experience and Big Night?
Sure, it's the myth and the magic of the American Dream, y'know, all rolled into one. I come from a really big family, my father was a businessman and what he always instilled in us was to be your own boss. But your success depends on your ability to balance your life and priorities. My father built up his business, and he was by no means a rich man, but he figured out how to work four-and-a-half days a week. Could he have worked six days and made more money? Yes, he could, but he valued his time with his family and his free time. It wasn't that he didn't like his work, he was born to do it, he was great at it--but he wanted balance in his life so he made less for a better quality of life. I like to feel like I'm trying to repeat that in my own life--that's the best gift, the most amazing gift that he could have given to us. And Big Night, I think by the end the brothers find that balance, when they touch each other on the shoulder over breakfast and it's understood that what should never have driven them apart almost drove them apart. I think that's a true moment.

If you're like me, though, it's hard to learn the balance part after being drilled in the business part.
It took a long time. I didn't understand that in my own life for the longest time, until I got married, in fact, and had children. I was one of those people who put too much emphasis on work and career and material possessions, and it took its toll on all my relationships, on my physical health, my emotional and mental health. And being in a creative field, stressing myself out, tweaking myself around twenty-four hours a day, didn't help my career--didn't make me better at what I did. It's not until I could find that sweet spot that I found that my work improved--that my enjoyment of that work improved and then success followed, in every way you could define it.

I have to ask about your first collaboration with the Coen Brothers.
I was living in New York, working mostly in the theatre, and I was a huge, huge fan of Blood Simple and I got a call from my agent about this new movie that they were doing. So I went in for the audition and, you know, I just had to, just had to have the role--something just clicked for me in the way that they write. It speaks to you, it jumps off the page into your brain. It's like stepping on a moving train and you just sort of go along for the ride. So they responded to the audition and it was a huge leap for me. I shot Barton Fink in July and moved out to L.A. that fall. The movie came out in the spring and it was a year before I got "Wings".

Your early career reads like a meteoric rise to prominence. What was the reality?
(laughs) I was really a theatre actor. When I got out of graduate school I worked at a rep theatre in Cambridge, Mass for four seasons, I left there for NYC and spent six years off and on Broadway, public theatre, Shakespeare in the park, regional theatre--it was my entire existence really. And though I slowly was getting into film and television, I always thought I was going to be on stage to make my living.

And in fact you met your wife during "The Heidi Chronicles".
Exactly--the theatre was my livelihood, I thought it would be ever-present.

You can't have much time for the theatre anymore.
No, I try to go back, I really try and I say, "Oh, my God, it's been five years." Last time I did this off-Broadway [revival] of "Waiting for Godot" with John Turturro and it was pretty great. I still think of myself as a stage actor, you know. When I do film and television I try to implement what I was taught to do in theatre, to try to stretch into characters that are far from myself.

You recently went behind the camera with Made-Up.
I had no idea what to think, no idea what I was doing when we first started, it was really scary. But after a while you start to figure out what everyone's job is, you focus on what you can do when you realize that there are other people to cover the bases that you can't. Once I was able to compartmentalize, though, and not worry about every little aspect--once I was able to do staging moments, framing shots, working with actors, those kind of things--I have to say that it was kind of like a drug. I'm a control freak anyway and directing legitimizes any fantasy of control freakism that you can imagine.

I heard a rumour that you wanted to make a film on the life of Lebanese poet/philosopher Kalil Gibran.
Yes, that's still in the development stages, but it's definitely something that I'm researching. It'd be something I'd love to pursue, it's something really close to my heart. It's an interesting synchronicity, I think, in our current environment, where artful protest is becoming current again, to revive interest in Gibran.

The Siege is suddenly current again, too.
That's true. Part of the reason I wanted to do the project in the first place was to provide an Arab-American, particularly a Muslim-American, who was positive. I wanted to portray him in a positive light to balance the villains of the piece--more, to provide a well-rounded presence so that it wouldn't be as easy for certain elements to latch onto the guy as unrealistically good or, on the other side, unrealistically evil. It's a difficult line to walk sometimes when so many of our movies demand that polarity. All I wanted with that film was to represent the possibility that there might be "normal" people who are Muslim or Arab with the same fears, responsibilities, hopes.

There are a few films recently that are so anti-Arab, things like Hidalgo and Spartan, yet the hue and cry seemed to have been reserved and spent on The Siege. Has the climate changed that much?
(laughs ruefully) I couldn't begin to answer that question. It seems almost like this random, free-floating political correctness that latches on here and again, finds strength, loses steam. With what's happened in the world the last three years, it's easier to see why it's become popular again to diminish and revile Arabs and Muslims in American popular culture. I would almost think that it behoves certain people in powerful positions to champion that aggressively pejorative stereotype. But it's that instinct to recoil--to revert to this sort of tribalism and casual racism, and the ideologues that prey on that instinct, that we have to fight hardest against. People need not to be so accepting of it. It's something that I really struggled, and have struggled with. I wish I had an answer.

You seem to get plugged into a lot of characters of different ethnicity--what was the ethnicity of the cabbie from Quick Change?
(laughs) I'd call that "indeterminate." I made up my own language for him. When I first went on "Wings", where I ultimately played another cabbie, I was only hired on for one episode in the second season and Antonio was a waiter in an Italian restaurant. They liked me and wanted me to be a recurring character, but they couldn't keep going back to the restaurant so they wrote me a profession that would make sense in the context of an airport.

Do you lament not having the opportunity to play more Arab characters?
I do. It's something that I've been thinking a lot about now that I find myself in a position to actually exert a little bit of name-recognition. A very little bit. (laughs) But I've been in contact with a lot of younger Arab-American writers and directors, trying to get projects together, get a couple of projects in the pipelines. Things that are more human stories, less political, more of a glimpse into the day-to-day of our lives, you know. It feels like a great untapped minority subject and it feels important to me not to make them political--they're political enough just for the fact of them.