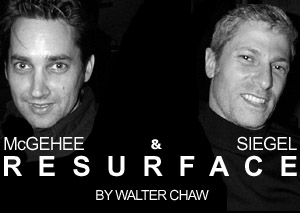 June 22, 2003|Aspen's NXT lounge and nightclub has, off its main floor, a series of smaller rooms and bars decorated in various shades of dirty opulence. Serving as the base of operations for the 12th Aspen Shortsfest, there I met dark complected Scott McGehee and silver-haired David Siegel--co-hyphenates behind icy technical pictures Suture and The Deep End--in a 20' x 30', glass-walled room sporting three over-stuffed love seats and little padded ottomans with Corinthian flares that I'm sure have a name and work well as a tape-recorder stand. After a brief, bonding conversation about the sorry state of modern film criticism (fed by the sorry state of modern major-daily entertainment editors) and the lack of a critical tradition in the United States in comparison to Europe, we moved on to Suture.

FILM FREAK CENTRAL: "Suture" is, of course, a term used in film studies to describe audience identification with characters. Given the mannered detachment of your film, is the title ironic?
SCOTT McGEHEE: I mean the title was a little bit ironic, a film theory joke. But I don't think the title was meant to create any kind of distance, we thought it was a great title anyway, but we were warned that people would think that it was a horror film and that people would be disappointed or wouldn't see it, but we stuck to our guns, mainly because we thought it was so clever. (laughs)
DAVID SIEGEL: The irony has two sides to it: it's kind of funny but at the same time we do hope the film allows for some sort of reflection on a particular kind of identity in relation to identifying with the characters.

That interest in personal archetype, married to your dedicated story of place and use of nature as metaphor recalls Thomas Hardy's fiction. What are your literary influences, knowing that The Deep End and your next film are adaptations.
SM: I don't know that there's anything specific--I mean, as you say, The Deep End is based on an Elisabeth Sanxay Holding novel, but... Yeah, y'know that's interesting. Literary influences haven't been a big part of our work.
DS: I never even thought about this.We could talk for an hour about the influences that other films have had on our work, but I don't think we've ever been asked about literary influences.
SM: I can say that the idea of storytelling: literary and film, are so radically different yet both are ideally after the same thing. You take certain schematic aspects of narrative with filmmaking and you do something very sense-oriented with them--then you take the same narrative with literature and it's almost like one comes in one direction, one goes in another. I'm sorry, I'm just sort of going off the top of my head here, you took us by surprise. (laughs)
DS: We talk about photography, architecture, painting--but we never talk about books, which is very odd because of the adaptations that we do and that we find so many ideas in literature. It's something about how we process information, I think, it's always cinematic in a way: metaphor and iconography seems very different.

Your company I5 produced and financed two films: Lush and The Business of Strangers. How did that come about?
DS: We had an interesting experience between Suture and The Deep End in that we wound up working on three different projects that each took a year-and-a-half and two years not to happen. They were all really good projects, projects that we had written and were really passionate about, but for whatever reason--casting, financing--it just kept being...  We were really frustrated. So it was out of that frustration that we hooked up with Rob Nathan and this idea of trying to raise some money to do this a different kind of way--to develop the means to raise money independently. That's what happened and how we started to think about producing other films and our own--it's how The Deep End happened.
SM: I5 isn't actually producing films anymore--it's not a bad thing, it's a transitional thing. We met Patrick [Stettner] at the Sundance writer's lab. We were there with a different project and he was there with [The Business of] Strangers right around the time we were forming I5, and everything just came together. We were really impressed with his script and liked him a lot.
DS: He did a really great job.

Talk to me about your water imagery--a given, I guess--in The Deep End. You mention Hitchcock in other places and water, for sure, means something very definite to him--what did it mean to you?
DS: I think it was fairly malleable. We talked about water in a lot of different aspects, I think. I remember early on talking a lot with Tilda about surface tension, for example, being a metaphor for what her character and how her performance could work. That collection of molecules holding this thin skin of water together and how that gets pushed apart, but really it's liquid ready to burst its container somehow.

I read an interview with Swinton where she describes her character as "submerged" and the film a process of "surfacing."
DS: That was Tilda's take on the character, which as we were writing the script and talking about the story, was not a way that we had seen it at all. But we liked that, we thought that was a nice thing.
SM: Water's great--it's such a universal, feminine symbol, so difficult to get a firm hold of, y'know. That was an exciting thing for us, something that everyone has myriad associations with working in different ways in different places that, despite its complexity, doesn't lose any kind of importance but rather gain in meaning for that complexity.
DS: The lake, the way that it functions in the movie, kind of gives birth to the film and takes the film back in many ways. The body dropped in the lake--it contains her problem, conceals it, and gives birth to it in a way, too. The way that water and the lake worked for us wasn't a metaphor that you could hold in your hand, y'know, it was something that hopefully you could regard from a middle distance so that you don't lose sight of the film in the examination of its central image.

There's a shot through a water droplet in The Deep End that reminded me a little of the last shot of Blood Simple--can you tell me how the shot was achieved and its origins?
DS: The idea of that shot came from a Bill Viola piece where a water drop is being photographed by a video camera while the camera is filming you, and the drop falls on a snare drum. It's a beautiful work and something that we cribbed and wrote directly into the script. Something we really thought about.
SM: It wasn't finished until post-production, we ended up having to do a digital composite.

How much did Max Ophüls influence the picture?
SM: Our first exposure to the material was seeing [Ophüls's] The Reckless Moment--it's what drew us to the book and we are huge fans of Ophüls and that film, the performances. James Mason in that film...
DS: Joan Bennett.
SM: Right, all fantastic. We would never have thought to remake that film because we loved it so much and it wasn't until we read the book. Years had passed...
DS: We just noodled around with it, kicked it around for a long time...
SM: And finally we had enough distance from the movie, I guess...
DS: I think it was finally a conversation. We think of this film as a melodrama--the studio sold it as a thriller, which I think ultimately was good for the reception of the film, but we always saw it as that kind of Mildred Pierce, Stella Dallas sort of melodrama. We'd been interested in the genre for a long time, the question of how to reinvent the melodrama.
SM: It was a very hard thing to do, the guidelines of constraint and sacrifice were so rigid.
DS: I think it was one conversation--a sort of "what if" conversation like, "What if the daughter in The Reckless Moment were a son," and that's what started the ball rolling.
SM: That's right, that's right--we were talking about different stories and ideas of updating, it's a really durable plot, it was what aspects of it we could change.
DS: I just last week saw Fassbinder's Ali: Fear Eats the Soul. I'd never seen it, so I think that is one of the most, if not the most, amazing reinvention of a melodrama that I'd ever seen.

You were attached for the longest time on the long-delayed adaptation of The Hot Zone, now you're doing an adaptation of Myla Goldberg's Bee Season.
DS: We just couldn't come to terms on The Hot Zone--we were actually very keen on doing it, but it ended up as not a great experience.
SM: We worked on it for seven months or so doing drafts. They had a really interesting script and we were doing takes on it, and we really liked the way it was coming and we thought that they did, too--but in the final hours things shifted.
DS: Bee Season was something that we'd read right after The Deep End and liked a lot, but there was already a director attached to it so we sort of put it out of our mind. But when The Hot Zone fell through, we found out that it was available again so we really lucked out.
SM: Yeah, we started seeing the writing on the wall with The Hot Zone, the script notes started changing rapidly and so we really started keeping an eye on the status of Bee Season and were pretty ready, I think, to make that jump when The Hot Zone fell through.
DS: People who know our work are more likely to understand Bee Season for us than The Hot Zone, you know, but we really liked how things were going, it's really just too bad about that.
SM: Right--but out of bad things come good, right?
DS: You hope. (laughs)