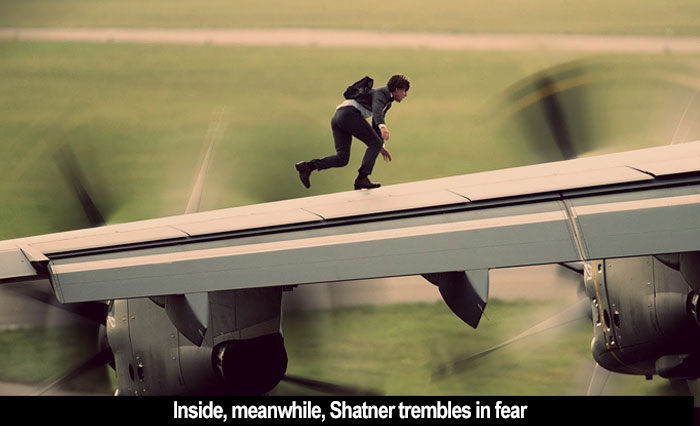 by Walter Chaw At some point, sneakily, wonderfully, Tom Cruise became our Jackie Chan. It happened when the storyline shifted away from his essential ickiness--the Scientology thing, the Katie Holmes thing, and all the attendant nightmare gossip--and onto his fearlessness and absolute willingness to perform his own stunts wherever possible. (I realize of course that said storyline may never shift for some.) There were murmurs when he did the rock-climbing in the second Mission: Impossible flick--the one where he recruited John Woo, who was at the time the best action director on the planet. Those murmurs turned to grudging admiration once it was revealed that Cruise let himself be suspended for real outside the Burj Khalifa in Brad Bird's superior Ghost Protocol; and now, with Christopher McQuarrie's fleet, intelligent, immanently professional Rogue Nation, for which Cruise hung from an airplane in flight and held his breath for six minutes, Cruise's bravado is a big part of the draw.

Missteps like Rock of Ages aside (and the failure of that was hardly his), credit Cruise as well for his keen ability to ally himself with not only the right A-list directors (Martin Scorsese, Oliver Stone, Ridley Scott, Kubrick, Michael Mann, Spielberg, PT Anderson), but also the right B-list ones like Doug Liman, Neil Jordan, Ben Stiller, Bird (making his live-action debut), James Mangold, and, twice now, McQuarrie. Just his Mission: Impossible signature franchise recruited, along with Woo, Bird and McQuarrie and Brian freaking DePalma and J.J. Abrams. Cruise is a deeply-flawed human being who knows something about movies and puts his money where his mouth is. He has a sense of humour about himself. He seems aware that he runs a lot in his movies, and in Rogue Nation, his much-discussed height or lack thereof is made into a pretty great joke in the middle of a pretty great action set-piece set to, audaciously, a performance of Puccini's Turandot. Of all the audacious things in the film, in fact, the most audacious may be that composer Joe Kraemer's score adopts "Nessun dorma" as its love theme. It's a lovely recognition that at this point in the franchise (it happened in the fourth Die Hard), Cruise's Ethan Hunt has become, as one character describes him, a "manifestation of fate." He's icon as self-knowing sign and simultaneously its own signifier. Rogue Nation is not unlike a Roland Barthes essay in that way.

It's the kind of action movie that quotes Rudyard Kipling's "If: A Father's Advice to His Son" and does so as a central plot point. Which is not to say that it's pretentious. If anything, Rogue Nation is exuberantly not-pretentious. Its plot is Blofeld-immense (operatic, you could say), covering the discovery of a Bizarro-IMF ("Impossible Missions Force," for the uninitiated), itself a parallel-universe "Hydra" with eurotrash tentacles in every missing plane, factory explosion, and political assassination in the world. Played by the great Sean Harris, who, between this and '71, may finally become the star he should be, main villain Lane is in his constant testing of the fidelity of maybe-double-agent Ilsa Faust (Rebecca Ferguson) forever one step ahead of an unusually befuddled and mortal Hunt. Taking a cue, perhaps, from the Casino Royale reboot, Hunt in this one dies (something spoiled in the trailers), for a little while at least, and meets both his Moriarty and, in Ilsa, his Irene Adler. Between her and the ladies of Mad Max: Fury Road, it's been a strong, compelling year for women in superior action movies. Early on, Hunt asks Faust if she's all right with his pace. "Don't wait for me," she replies. And he never does--and she never flags. She saves Hunt twice. Three times, really, if you catch a brilliant bit of business where she casually prevents Hunt from flying off into a void. Perhaps telling too much, I felt like applauding when the standard final showdown between hero and arch-henchman occurred between the goon and, yes, the girl.

For the rest of it, there's that centrepiece at the opera; those scenes where Cruise puts his own life at risk; an excellent motorcycle chase that isn't as good as the one in Woo's instalment yet still finds character development in its explosions; and nice, warm beats for Simon Pegg, Ving Rhames, and Jeremy Renner that don't drag. The picture's failures are, ironically, failures of patience in allowing Cruise's moments on the stage to be uninterrupted. It's the difference between how John Badham wanted to shoot the dance sequences in Saturday Night Fever...and how they were eventually shot. The movie looks away too often when it should have just taken the time to appreciate the pre-eminent action-movie star in the United States doing whatever it takes to create something with weight. And what does it say that Cruise has, this time around, allowed a female agent to be the emotional centre, the physical equal, and the character with depth in the one property that is undeniably his? Rogue Nation is a superior action film in a series that, with its fourth and fifth instalments, has genuinely hit its stride. Suddenly and subversively, even as Cruise evolves into a kind of middle-aged white Jackie Chan, he's emerged, too, as something of a Sylvester Stallone cultural bellwether. Yeah, I'm a fan.